President Donald Trump claimed that "illegal immigration" had been a problem in the United States for "thousands of years."

On January 6, 2019,  the following status update appeared, paraphrasing purported comments made by United States President Donald Trump which described “illegal immigration” as an American problem for “thousands of years”: 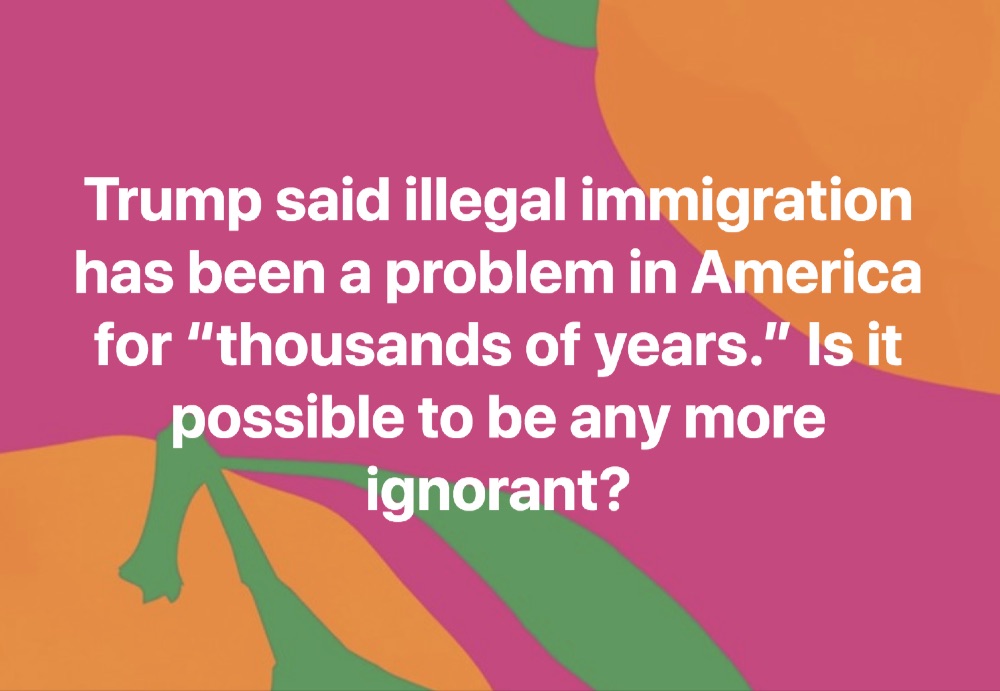 Trump said illegal immigration has been a problem in America for “thousands of years.” Is it possible to be any more ignorant?

Although no citations appeared alongside the popular Facebook post, users in the comments debated whether President Trump had said any such thing.

Several readers shared a link to a document titled “Remarks by President Trump in Roundtable on Border Security,” published to the White House’s website on January 11 2019 (and recorded on January 10 2019). The subsequent comments made by Trump sounded a bit like the paraphrased Facebook status. In those remarks, he said:

In a few moments, the American people will hear directly from our frontline border agents about the tremendous flood of illegal immigration, drug trafficking, human trafficking — a phenomena that has been going on for a thousand years or more, and that you’d think was something that modern society wouldn’t have. And I hate to tell you that, because of the Internet, it’s worse than ever before. Human trafficking — it’s a horrible thing. And much of it comes — it’s a world problem, not a U.S. problem only.

But not only were those comments made after the status update was posted, their meaning was also different in the full context of the remarks. President Trump reiterated that he meant “human trafficking” had been going on for thousands of years, not specifically unauthorized immigration into the United States.

But it’s not just illegals. It’s criminals. It’s drugs. It’s the new phenomena that’s been age-old, been going on for thousands of years, but it’s never been worse than now because of the Internet. Human trafficking — where they grab women, put tape over their mouth, come through our border, and sell them. And they go both ways, in both directions. Now, they don’t go through a port of entry. They’d be caught. But they go up where there’s no wall. They make a right; they go to Mexico.

Look, we better get smart. Human trafficking is a big business. It’s a big deal. Dealing in children is a big deal. Children are probably the most harmed by not having the wall or its equivalent.

In both sets of comments (one posted on January 6 and one posted on January 11, 2019), Trump spoke of both immigration and human trafficking. With respect to a problem existing for “thousands of years,” Trump clearly referenced the latter issue both times. He did not in either set of comments say that undocumented immigrants had been coming to the United States for “thousands of years.”