In May 2022, Republicans blocked a bill aimed at controlling high gas prices.

On May 18 2022, a screenshot of a headline, “Republicans block bill to stop price gouging at the pump as gas hits new record high,” dated the day before, was popular on Imgur: 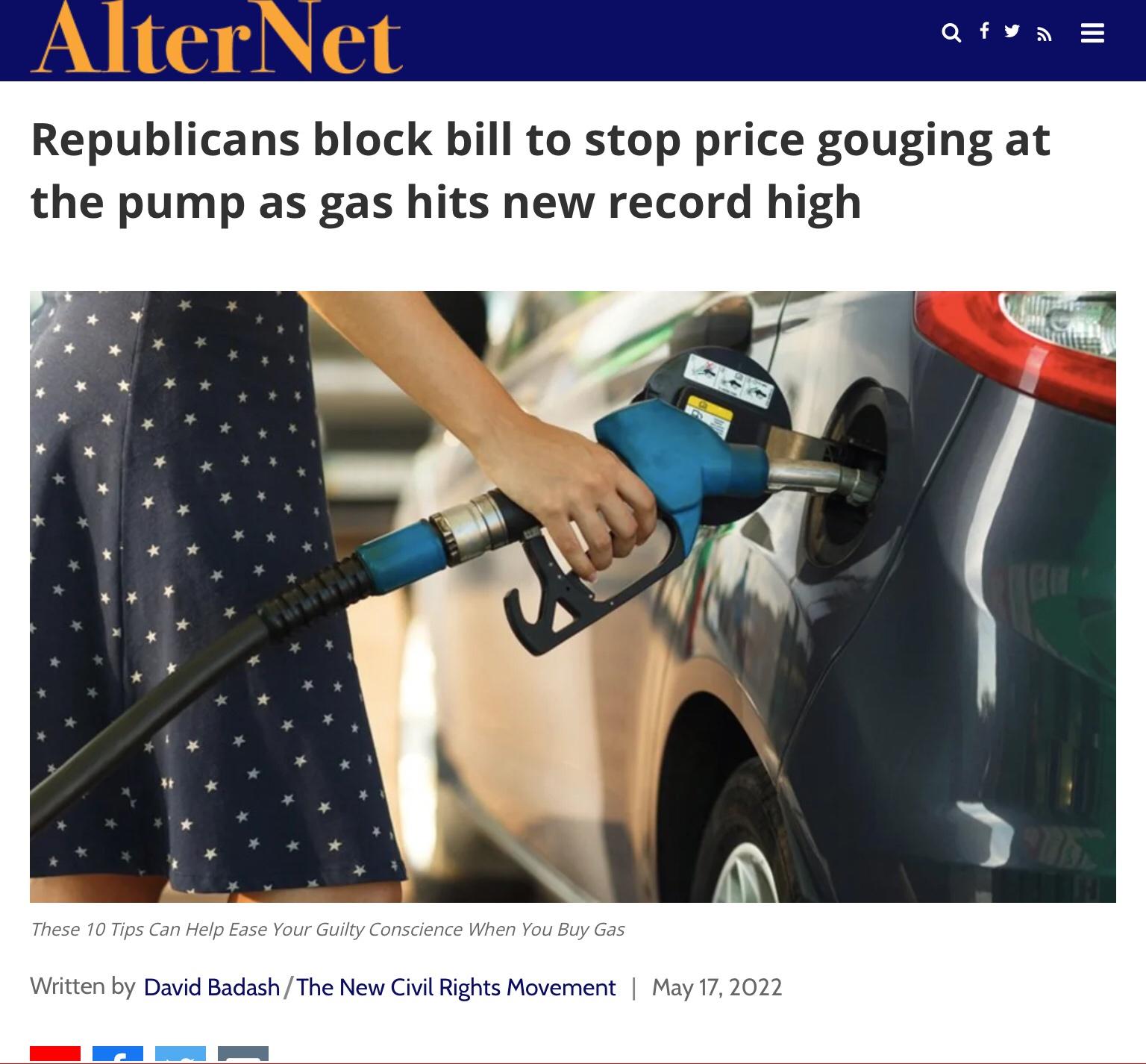 As gas prices hit a high this week [of March 9 2022], top Republican lawmakers took to the airwaves and the floors of Congress with misleading claims that pinned the blame on President Biden and his energy policies.

Mr. Biden warned that his ban on imports of Russian oil, gas and coal, announced on Tuesday as a response to Russia’s invasion of Ukraine, would cause gas prices to rise further. High costs are expected to last as long as the confrontation does.

While Republican lawmakers supported the ban, they asserted that the pain at the pump long preceded the war in Ukraine. Gas price hikes, they said, were the result of Mr. Biden’s cancellation of the Keystone XL pipeline, the temporary halt on new drilling leases on public lands and the surrendering of “energy independence” — all incorrect assertions.

A May 18 2022 Twitter search for “Biden gas prices” returned a number of topical tweets from high-profile accounts, leveraging fuel costs as a partisan matter and apparent issue of primary concern:

This is the intended consequence of President Biden’s war on American energy.
https://t.co/gFJj9Z9aot

Biden on March 31: Gas prices will "continue to come down … it will come down and it could come down fairly significantly"

Gas prices just reached a new record high for the 9th day in a row. pic.twitter.com/8quZblf5pQ

I and 19 other senators signed a letter demanding that the Secretary of Commerce stop delaying permits for existing oil and gas leases.

Both the Imgur post and Reddit link were from a May 18 2022 article on the New Civil Rights Movement website, a source labeled as having a “left bias” and “mixed” credibility by Media Bias Fact Check. The article reported in part:

Take a walk through U.S. Rep. Cathy McMorris Rodgers‘ tweets and you’ll find complaint after complaint about the price of gas. Congresswoman McMorris Rodgers, Republican of Washington, is the ranking member of the House Energy and Commerce Committee but opposes legislation to stop oil and gas companies from price gouging consumers.

Rep. McMorris Rodgers on Monday [May 16 2022] claimed that making it illegal for oil companies to price gouge is “socialism,” something that’s done in places like “Soviet Russia,” not in America.

The bill would not set price caps as some Republicans suggest, rather, it would empower the Federal Trade Commission (FTC) to investigate if oil and gas companies are price gouging consumers.

Republicans on the powerful House Rules Committee on Monday [May 16 2022] blocked the bill, H.R. 7688, the Consumer Fuel Price Gouging Prevention Act. from advancing. The GOP, thanks to McMorris Rodgers, is now calling the legislation the “Socialist Energy Price Fixing Act.”

Congress.gov maintained an in-progress entry for HR 7688, the Consumer Fuel Price Gouging Prevention Act; the full text of the bill is available here. Section two of the bill said:

(1) IN GENERAL.—It shall be unlawful for any person to sell a consumer fuel, at wholesale or retail, in an area and during a period of an energy emergency covered by a proclamation issued under paragraph (2) at a price that—

(A) is unconscionably excessive; and

(B) indicates the seller is exploiting the circumstances related to an energy emergency to increase prices unreasonably.

An subsection covered enforcement via the Federal Trade Commission (FTC):

On May 18 2022, the United States Chamber of Commerce, a private lobbying group, issued a statement and sent letters to members of Congress telling them to oppose the bill, warning lawmakers about its inclusion on a scorecard:

“The ‘Consumer Fuel Price Gouging Prevention Act’ would be more accurately named the ‘Bring Back 1970s Gas Lines Act.’ Economics 101 teaches us that when demand exceeds supply, prices rise. Rather than unlocking more domestic energy, this bill would effectively impose price controls that would discourage new energy production, resulting in even less supply while demand continues to increase. This will result in rationing and gas lines.”

“Energy production takes a great deal of lead time. That’s why the administration and Congress need to send clear signals to the energy industry that they will support domestic production not just in the near term, but over the long term. This assurance will provide important signals to markets and help to limit the impact of energy on inflation. That includes holding regular lease sales on federal lands and waters, moving swiftly to adopt a new Outer Continental Shelf Oil and Gas Leasing Program for offshore energy development, avoiding new regulatory burdens, and supporting the permitting reforms necessary to build energy infrastructure.”

On Tuesday [May 17 2022], the Chamber sent a letter to Members of Congress opposing the legislation and citing its inclusion in the “How They Voted” scorecard.

NTU urges all Representatives to vote “NO” on H.R. 7688, the Consumer Fuel Price Gouging Prevention Act. This misguided legislation would pave the way for abuse of executive branch power without meaningfully addressing the drivers of high gas and energy prices. The lack of clear definitions and guardrails in this legislation could lead to far-reaching negative consequences for taxpayers and consumers.

As the New Civil Rights Movement’s piece indicated, the Washington Times reported on May 16 2022 that the bill was initially held back for procedural reasons:

Legislation by Democrats that would expand the Federal Trade Commission’s powers to investigate whether Big Oil is gouging consumers at the pump hit a snag in the House on Monday evening [May 16 2022] due to a lack of votes in the full chamber.

Democratic leaders were forced to pull the proposal from consideration during a procedural vote in the House Rules Committee that would have teed up the bill for a final vote later this week [of May 16 2022].

On May 17 2022, the House Committee on Rules (@RulesDemocrats) described a meeting on that day, with HR 7688 as one of the bills being discussed:

On May 18 2022, a “Floor Schedule Update” shared to the website of House Majority Leader Steny Hoyer mentioned HR 7688 (the Consumer Fuel Price Gouging Prevention Act) as one of three bills up for debate on that date:

Following “One Minutes,” the House will debate the first twelve bills listed for consideration under suspension of the Rules.

After debate on the Rule, the House will take votes.

Just before 3PM Eastern time on May 18 2022, the House Press Gallery mentioned the bill (twice) in relation to House Resolution 1124 — “providing for consideration” of the three bills referenced in the tweet:

House Resolution 1124 was a measure described as follows:

A popular Imgur post showed a headline from May 17 2022, “Republicans block bill to stop price gouging at the pump as gas hits new record high.” At that time, several Republican lawmakers tweeted to complain about high gas prices. On May 16 2022, the House Rules Committee met to “consider” HR 7688, voting had not yet occurred on the bill. Groups like the US Chamber of Commerce opposed the legislation, but it had not been “blocked” by Republicans as of May 18 2022 — although an effort was made.