Former U.S. President Ronald Reagan once said, "Under no pretext should arms and ammunition be surrendered; any attempt to disarm the people must be stopped, by force if necessary."

Admirers of Republican Party stalwart Ronald Reagan may be disappointed to know that a graphic spreading online falsely credits him with a distorted version of a statement by two men who were not in idealogical alignment with the former United States president.

The meme features a photograph of Reagan alongside the statement, “Under no pretext should arms and ammunition be surrendered; any attempt to disarm the people must be stopped, by force if necessary”: 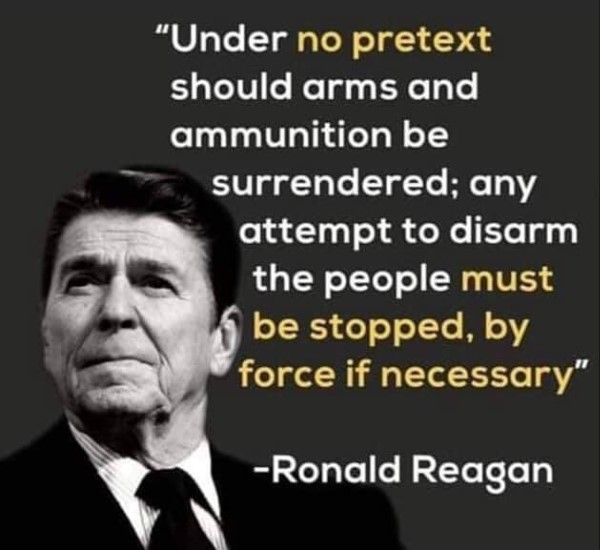 However, there is no evidence of Reagan saying that. The quote was actually taken (and changed slightly but meaningfully) from an 1850 speech written by philosophers Karl Marx and Frederick Engels for the Communist League in London.

The key difference here is that Marx and Engels were discussing the right to bear arms as related to workers’ rights to organize. The section in full (emphasis ours) reads:

To be able forcefully and threateningly to oppose this party, whose betrayal of the workers will begin with the very first hour of victory, the workers must be armed and organized. The whole proletariat must be armed at once with muskets, rifles, cannon and ammunition, and the revival of the old-style citizens’ militia, directed against the workers, must be opposed. Where the formation of this militia cannot be prevented, the workers must try to organize themselves independently as a proletarian guard, with elected leaders and with their own elected general staff; they must try to place themselves not under the orders of the state authority but of the revolutionary local councils set up by the workers. Where the workers are employed by the state, they must arm and organize themselves into special corps with elected leaders, or as a part of the proletarian guard. Under no pretext should arms and ammunition be surrendered; any attempt to disarm the workers must be frustrated, by force if necessary. The destruction of the bourgeois democrats’ influence over the workers, and the enforcement of conditions which will compromise the rule of bourgeois democracy, which is for the moment inevitable, and make it as difficult as possible – these are the main points which the proletariat and therefore the League must keep in mind during and after the approaching uprising.

The graphic also ignores that, while he opposed gun safety legislation during his presidency, Reagan shifted after leaving office; in March 1991 — ten years after John Hinckley, Jr. shot him and several others during an assassination attempt — he wrote an op-ed for the New York Times supporting the passage of the Brady Handgun Violence Prevention Act, named after his former press secretary James Brady, who was partially paralyzed by the shooting and suffered permanent brain damage, which required background checks for firearm purchases involving licensed dealers. The bill was passed in 1993.

In May 1994, Reagan joined fellow ex-presidents Jimmy Carter and Gerald Ford in sending a joint letter to members of the House of Representatives urging them to pass the Public Safety and Recreational Firearms Use Protection Act and implementing a ban on the manufacture, sale, and purchase of assault weapons. They wrote:

During the past five years, more than 40 law enforcement officers have been killed or wounded in the line of duty by an assault weapon.

While we recognize that assault weapon legislation will not stop all assault weapon crime, statistics prove that we can dry up the supply of these guns, making them less accessible to criminals. We urge you to listen to the American public and to the law enforcement community and support a ban on the further manufacture of these weapons.

The bill passed on September 13, 1994, but was allowed to expire on the same date ten years later, in an effort pushed by the National Rifle Association during the Bush administration.