On March 2 2020, journalist Judd Legum published a tweet claiming that the website for the Centers for Disease Control and Prevention (CDC) had been updated between March 1 and 2 2020, and that after the update the CDC was no longer disclosing the number of Americans tested for COVID-19:

BREAKING: The CDC has stopped disclosing the number of Americans tested for coronavirus.

On the left is how the website looked last night. On the right is what it looks like now, with the testing info removed.

The lack of testing is a scandal.

This is the coverup. pic.twitter.com/za5w9dkEKq

Legum’s tweet said that the CDC had stopped disclosing how many Americans were tested for novel coronavirus:

BREAKING: The CDC has stopped disclosing the number of Americans tested for coronavirus.

On the left is how the website looked last night. On the right is what it looks like now, with the testing info removed.

The lack of testing is a scandal.

This is the coverup.

The tweet had two screenshots attached. In the first, a table titled “COVID-19: Confirmed and Presumptive Positive Cases in the United States” appeared with five fields, which were labeled:

Beneath the table, an asterisked addendum explained:

* This table represents cases detected and tested in the United States through U.S. public health surveillance systems since January 21, 2020. It does not include people who returned to the U.S. via State Department-chartered flights.

In the second screenshot, the table had been condensed to the following three lines:

This part of the claim is true. The tables have changed. We were able to locate the page — “Coronavirus Disease 2019 (COVID-19) in the U.S.” — here: cdc.gov/coronavirus/2019-ncov/cases-in-us.html; it was last updated on March 2 2020. The page had been archived at least 320 times between January 27 and March 2 2020 on the Wayback Machine internet archive.

At 2:55 PM on March 2 2020, the table in Legum’s screenshot of the same day had three rows, not five. A second table above it contained statistics about COVID-19 deaths in the United States. When we attempted to archive the three-line table, the most recent archive of the page showed how it rendered prior to the edits. Our archived copy is here.

That portion of the page looked like this after the update: 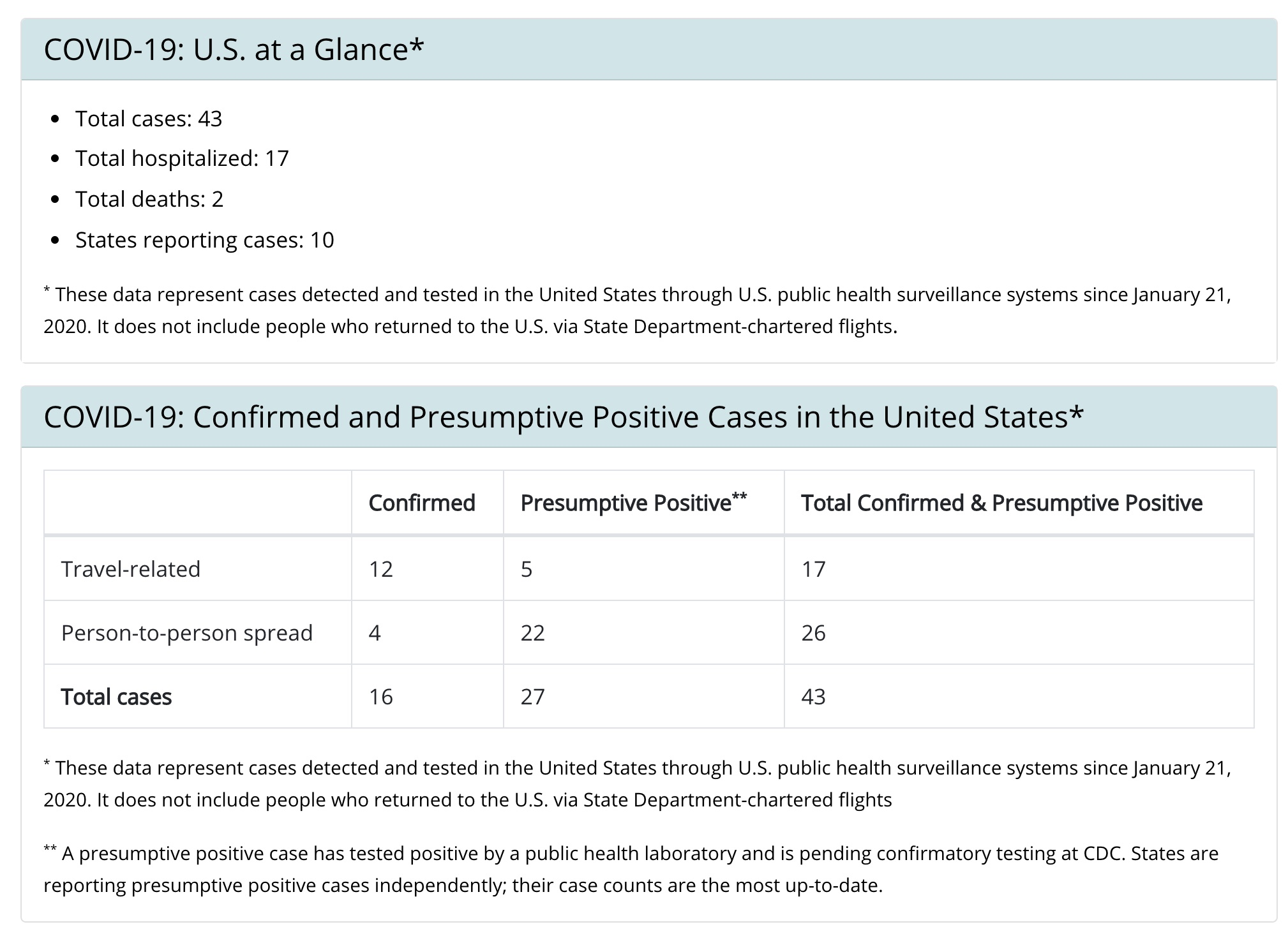 A version of the same page updated on February 29 2020 and archived on March 1 2020 included the number of people tested; it is archived here: 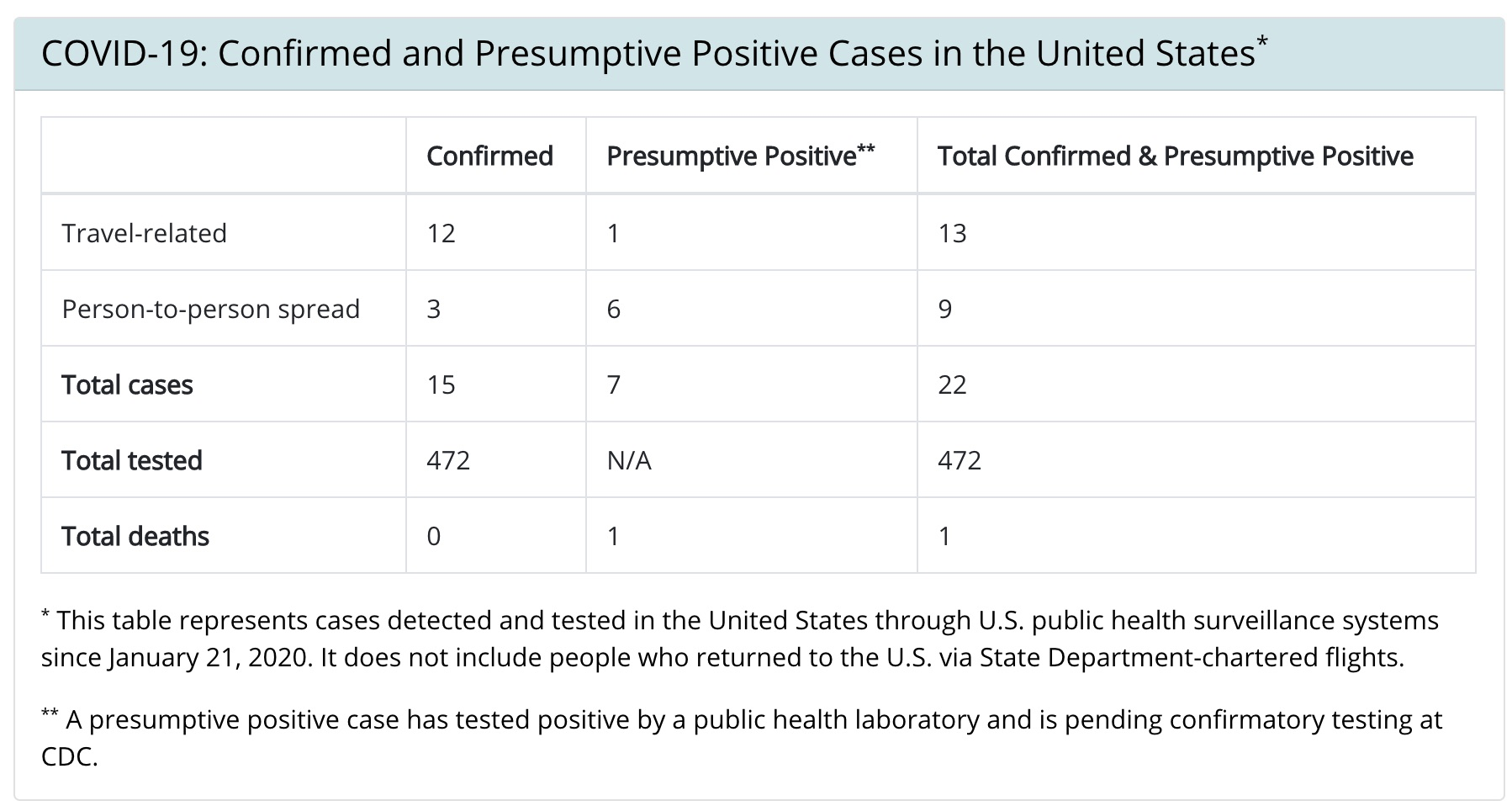 Legum’s screenshots were real and accurately described. Between March 1 and 2 2020, two lines were taken off the table, and a new table was added in its place. Left out of the new table entirely was the “total tested” line, which last numbered 472 in the archive we accessed. In that respect, that particular page on the CDC’s website did stop disclosing the number of people tested.

It is possible the CDC stopped disclosing the number of people tested for coronavirus entirely, but it is also possible a factor such as increased testing made it difficult for the Centers for Disease Control to keep the site current. We do know the statistic disappeared from the page, but not why or whether the CDC stopped disclosing testing numbers through other means.

This claim was concurrent with recent controversy over purported politicization of the novel coronavirus strain and its coverage. The previous week, talk show host Rush Limbaugh described the virus as “a hoax” and no more serious than the common cold, a claim that was picked up and passed along by his fellow disinformation purveyors almost immediately.

We contacted the CDC to find out whether it would continue disclosing the number of people tested for novel coronavirus in the United States, but have not yet received a reply. We will update this page if the agency responds. Until then, we rate the claim that the number of tests has stopped appearing on this page as True; however, for now, we are rating the larger claim — that the CDC stopped disclosing the number of coronavirus tests being performed — as Unknown.