Twitter suspended Bobby Piton after his "testimony" at an Arizona Hyatt on November 30 2020.

On November 30 2020, the name “Bobby Piton” became a trending topic on social media following a “hearing” at an Arizona Hyatt hotel about Joe Biden’s win in the 2020 U.S. presidential election.

Piton was not mentioned by name in coverage published by the Arizona Republic, in which the hearing was described as largely unofficial and mostly a rally for outgoing president Donald Trump:

President Trump’s personal lawyer spent many hours with a handful of Republican Arizona lawmakers at a downtown Phoenix hotel Monday [November 30 2020,] discussing concerns with the 2020 election. Across town, as the meeting wore on, state officials officially certified the results showing the president lost.

Rudy Giuliani and state lawmakers billed the meeting as a “hearing,” but it was not an official legislative event.

Outside the Hyatt Regency, several hundred Trump supporters filled Second Street between Adams and Monroe, where they waved flags, chanted, sold hats and other Trump merchandise, and showed their support for the president.

Throughout the day in Arizona, many credible whistleblowers have stepped forward to give testimony about the multitude of irregularities that occurred during the election.

One expert witness, Bobby Fiton, attested to mathematical fraud during the election that casts serious doubt on the vote totals as they are currently reported. He made a particularly powerful statement with regards to Gov. Doug Ducey, who certified the dubious vote while whistleblowers were going on the record.

“If I was an executive at a publicly-traded company, I would never sign that because I risk jailtime and having all my money taken from me in lawsuits,” he said.

Immediately after he issued his testimony, Fiton was banned on Twitter to prevent his analysis from being widely understood by the masses[.]

Twitter suspended Bobby Piton during his live testimony on the fraudulent election [on November 30 2020].

Piton’s testimony pointed out blatant voter fraud through incontrovertible evidence, at one point claiming he’d stake his life on the factual nature of his testimony.

Twitter suspended him for daring to speak out publicly on the fraud.

Here is what Piton said before he was suspended.

A post about Piton’s commentary during the Hyatt event was shared to Reddit’s r/conspiracy, and claims about his purported Twitter suspension soon appeared on r/DonaldTrump:

We attempted to verify that Piton was both on and suspended from Twitter on November 30 2020, restricting a search for Piton’s name to results on or before November 3 2020. Search results were paltry, with several misdated entries about his purported suspension; the only mentions of “Twitter” were the ones about the rumor.

Two specific Twitter handles were mentioned alongside claims about Bobby Piton’s Twitter ban. One was @BobbyPiton and the other was @realBobbyPiton, and both handles led to suspended accounts.

It is, however, commonplace for Twitter pranksters and disinformation purveyors to create false accounts for a person suddenly in the limelight on social media. We searched for both @BobbyPiton and @realBobbyPiton, and neither account had any mentions dating back further than the evening of November 30 2020 — after Piton captured users’ attention speaking at the Arizona Hyatt: 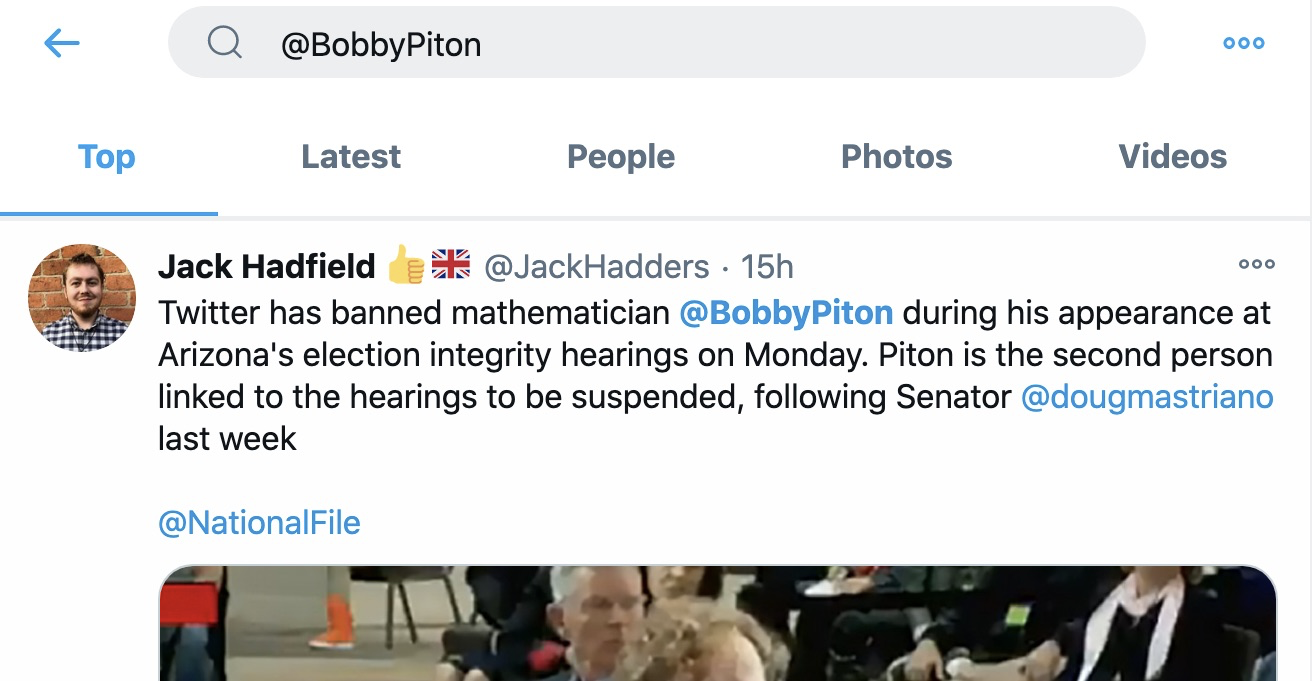 Search results for @BobbyPiton and @realBobbyPiton respectively ended with the two tweets in the above screenshots. If Piton was both behind the account or accounts, he was virtually inactive before November 30 2020. Surviving mentions of one or both accounts suggested they were recently created and rapidly attracted followers:

Bobby Piton did appear to maintain a relatively recent (but not brand-new) Facebook page, to which he posted publicly on December 1 2020:

To all my Family and Friends and Fellow American Patriots.

Thank you for the kind words and criticisms about the analysis that I performed to present to show that V Fraud exists in the State of AZ.

The Data proves that this really did happen in 2020 and has most likely been occuring for over a decade. To all of the critics thus far, I’ve analyzed billions of lines of data over my career and can sometimes see the math play out by just looking at the raw data. I will provide a very thorough detailed step by step process of how you can replicate these results if you wish to because I think we as a Nation should perform this on all 180,000+ precincts going back 2 decades to uncover all of the possible Fraud that has transpired over time.

I was quite pleased to have the President of the United States retweet part of my testimony. I’m very grateful and honored to have been asked to assist OUR Duly Elected President receive what all of US Deserve as Americans – A Fair Shake. We all deserve the outcome we deserve when it was a Fair Contest, otherwise we owe it to our Fellow Americans to Unite and Stand up against Corruption when Fair Contests are not occuring. #EqualJusticeForAll

Remember, if they can do this to a President, then every last one of is disposable in their corrupt minds.

I have provided my contact information to Jenna Ellis and Mayor Giuliani. Should they reach out, I will gladly hand over the process to them (or assist in doing this analysis across all other disputed States) to help ensure this attempted Public Assassination of the Will of the American People does not take place.

God Gifts to each and every one of us Unique Skills, our Gift to God is utilizing those skills to make the world a better place. I am truly Blessed for having had the opportunity to Honor God yesterday by utilizing the talents God bestowed upon me. I will do my best to continue to utilize those talents for Gods glory.

We sent Piton a Facebook message to ask whether @BobbyPiton or @realBobbyPiton were accounts owned by him; we will update this page if we receive a response.

After Bobby Piton’s appearance at the Arizona Hyatt on November 30 2020, his name became a trending topic. Subsequently, rumors that @BobbyPiton and @realBobbyPiton were his accounts and were suspended were spread by sites like Conservative News Daily and Gateway Pundit, based seemingly on both handles being suspended. However, no mentions of either account appeared before late in the day on November 30 2020, and it was equally if not more likely the accounts were the work of imposters.