On August 18 2019, Facebook page “Smooth AF” shared a screenshot of a tweet claiming that University of Findlay students had discovered a chemical compound that “kills glioblastoma cells”: 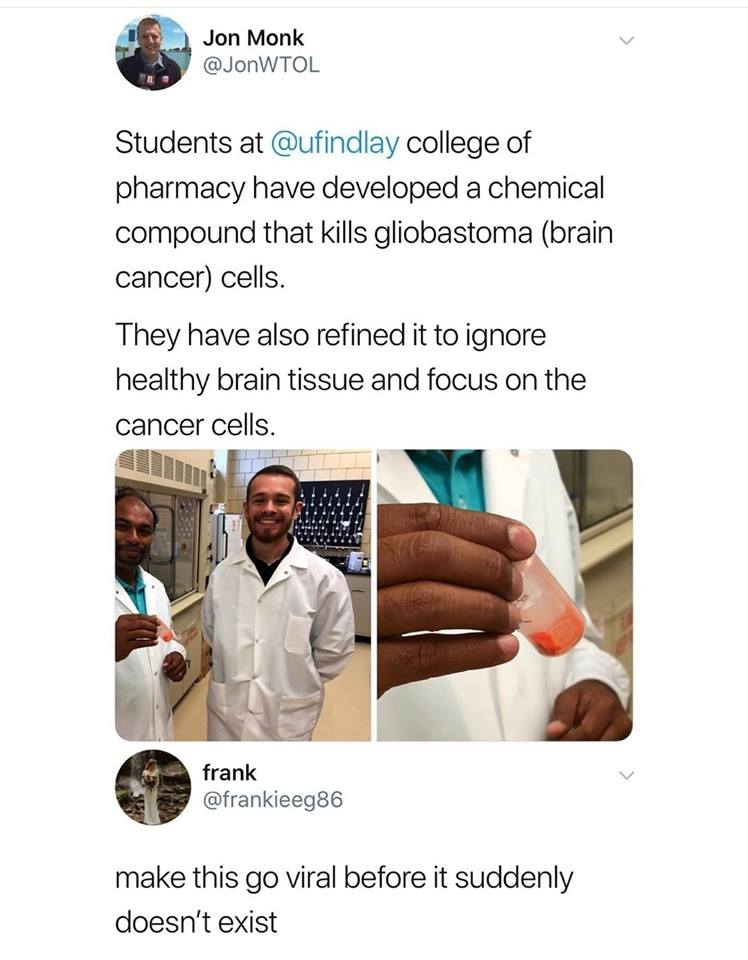 At the top of the image was an August 15 2019 tweet from WTOL reporter @JonWTOL:

They have also refined it to ignore healthy brain tissue and focus on the cancer cells.

It read in part:

They have also refined it to ignore healthy brain tissue and focus on the cancer cells.

make this go viral before it suddenly doesn’t exist

Basically the cure for cancer has basically been discovered but the government doesn’t want it coming out bc cancer gives the pharmaceutical industry so much money.

In the video, the same reporter, Jon Monk, says that the difficulty in developing therapies for glioblastoma include identifying compounds that can target cancer cells while at the same time not harming healthy brain cells. Monk indicates a compound known as RK-15 is “a hundred times more selective” in targeting cancer cells over healthy brain cells, but the benchmark by which the efficacy of “one hundred times” was determined was not described.

During the two-minute segment, Monk says that the discovery is a breakthrough “that could very well lead to future treatment” for glioblastoma, not that the students developed an actual applicable therapy for the illness. He also says that glioblastoma has a ten percent five-year survival rate; a November 2017 item on Cancer.org provides the respective five-year survival rates for glioblastoma in three age groups as 19 percent, eight percent, and five percent.

A separate WNWO report published on August 15 2019 bears a headline stating that “University of Findlay researchers discover new drug to treat brain cancer.” But at the end of the article, it clarifies that the discovery may not yet be “a drug” as most readers understand it:

Researchers said the next step is to test on animals, then continue clinical testing on humans before it could get approved by the FDA.

They said it typically takes 10 to 15 years for a new drug to get from the lab to the patient. The team at the University of Findlay is on year two.

News about the RK-15 discovery also made it to Reddit’s r/futurology. A top comment on that thread addresses some points of confusion about the process of developing such findings into actual drugs:

Went and saw the video.

Experts made similar observations — even if the discovery is promising, it is still many years away from any practical application. Epidemiologist @GidMK responded with information about how novel and untested the discovery was based on the report’s limited detail:

Another medical expert noted that many therapies are in development, but are far from becoming viable options for cancer patients:

There are hundreds of cancer cures that work in petri dishes and even mice but not humans.

However, those science-based observations were nearly drowned in a sea of conspiracy-oriented replies that the student researchers were “at risk” of being killed or silenced — comments that skimmed over the medical commentary noting that many similar treatments were already in development (and scores more would not progress to a trial stage):

If they want to live , they need to hide. It’s so sad to say, but every scientist/person that finds a cure comes up missing or dead 😔

A number of local news affiliates reported on the pharmacy students’ discovery of RK-15, stating that it “very well may” lead to eventual glioblastoma therapies. Many readers and commenters appeared to infer the students had invented a drug ready for market, which was not the case. Separate comments suggested that the students were at risk of harm due to mysterious forces determined to suppress cancer cures, a common but baseless conspiracy theory predicated in part on confusion about the manner in which drugs are researched, developed, and readied for market — as well as incomplete reporting and headlines suggesting the discovery was a drug ready to be offered to to cancer patients at the time the reports appeared.