Members of the United States Marine Corps Reserves were activated as part of a defense effort against "Soros ANTIFA" and a Democratic Party-planned "second Civil War."

A gaggle of specious blogs and social media accounts set about inflaming tensions for their followers in a set of posts reminiscent of other fake controversies.

The posts center on vaguely-worded “threats” and wide-ranging military deployments leading up to October 16th 2019 or October 19th, depending on the “source.”

I received a warning confirming military on the move. An update from someone very highly-ranked & very close to the president. It’s supposed to start around the 19th as a prelude to certain States bringing in UN troops. From what I’ve heard certain States like California are going to pump up gang activity, violence in the streets. People will be stuck in their homes on purpose. They will then claim the President refuses to help because they are Democratic states & they will ask the UN to come in as peacekeepers. Then once they’re in the real takeover begins. That’s their plan. From what I’m hearing if only a portion of it happens for real it’s going to be bad.

The thread goes on to claim — baselessly, as usual — that the scheduled power outages in northern California by Pacific Gas and Electric were related to “Military coming down from Portland into CA.” It also invokes several familiar antisemitic boogeymen in claiming that “military reserves [are] being activated to defend against Soros ANTIFA and others in deep state”:

A similar effort in 2017 attempted to stoke fears of an “ANTIFA Civil War,” and spread online to the point that it dominated social media algorithms and online search traffic, and prompted reviews by government agencies taking the apparent smears at face value.

One of the outlets spreading that claim was the website Infowars, which is run by longtime conspiracy theorist Alex Jones. Infowars was cited by similarly disreputable blogs and sites, including Natural News, which in a post claimed that United States Marine Corps reservists were being activated for possible action against “deep state Democrats”:

I spoke on the phone with Alex Jones today about this breaking news, and he told me, “I talked to a high level Trump confidant concerning what Trump would do if the deep state attempted an illegal coup. Trump said they would call out the marines and surround the White House, then legally and lawfully pursue the originators of the criminal coup.”

This high-level confidant is someone who is very close to the President, and who is familiar with the President’s plans for how to deal with any attempt by the deep state to carry out an illegal coup attempt.

We urge all lawful, pro-America organizations and individuals to prepare to defend your President against an illegal coup attempt in the coming weeks or months.

When reached for comment, a Marine Reserves spokesperson told us that the “manpower guidance” was an update on a previous order “and nothing more.”

However, the blog did not mention that in September 2019, Jones was ordered by a judge to grant bereaved families of the Sandy Hook Elementary School mass shooting access to financial records related to his broadcasts. Jones had claimed for years — falsely — that the attack that caused the deaths of 26 people was a “false flag.” After being sued for defamation, Jones blamed his on-air smears on a type of “psychosis.”

But as so often happens, other users looking to gin up hysteria continued to push the claim: 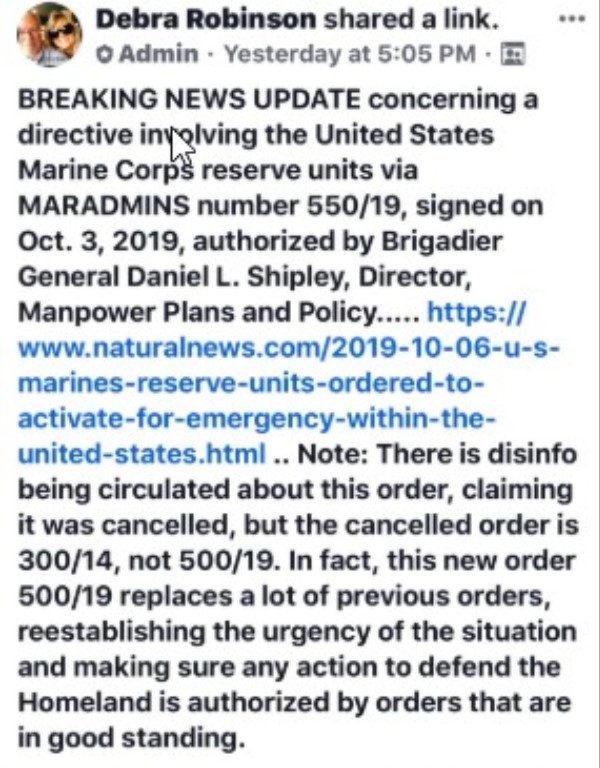 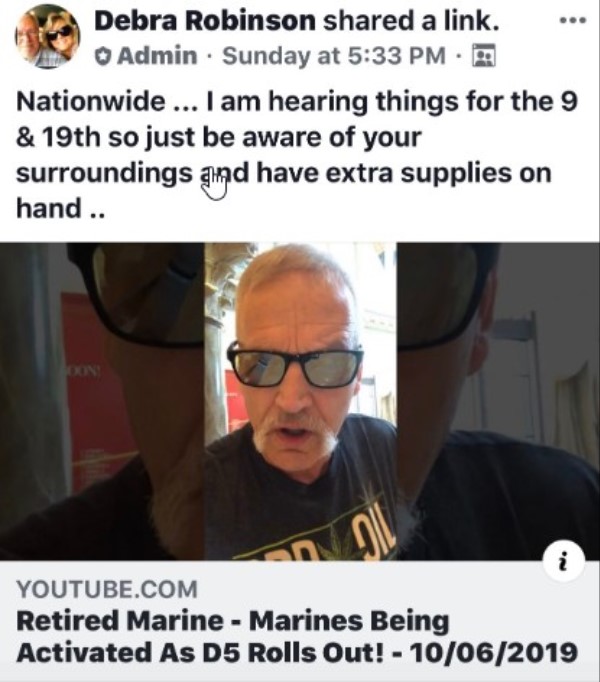 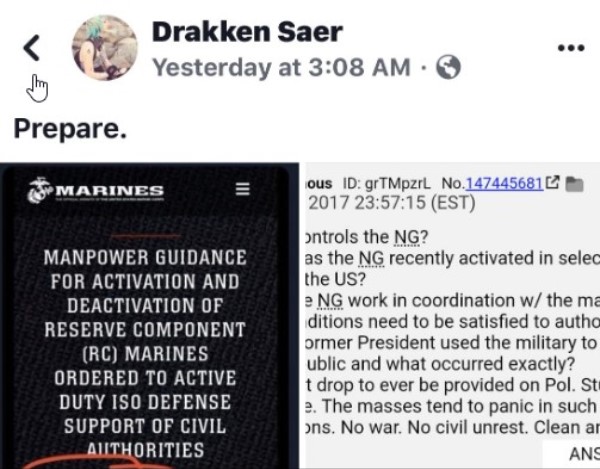 A similar wave of online bilge — pushed by many of the same entities as those who contributed to the baseless November 4 2017 and 2019’s equally ridiculous October 16 (or 19) “civil war” panics — surrounded the Jade Helm training exercise in Texas in 2015, which was promoted online as a signal of a federal “takeover” by United States President Barack Obama, to the point that Republican Gov. Greg Abbott ordered the Texas State Guard to oversee the exercise.

In May 2018, former Central Intelligence Agency Director Michael Hayden told MSNBC in May 2018 that “Russian bots and the American alt-right media” were responsible for the disinformation campaigns repeatedly pushing the concept of a second American Civil War.

“I’m figuring the Russians are saying, ‘We can go big time,'” Hayden said of the governor’s response. “At that point, I think they made the decision, ‘We’re going to play in the electoral process.'”

We contacted Twitter asking if it planned to provide any recourse for users concerned about the spread of this type of disinformation given that it is not included in the set of online behaviors that can be mentioned in reporting problematic content. We have not yet received a response.

In January 2021 supporters of outgoing President Donald Trump seized on paranoia about his loss in the 2020 presidential election to push the idea that he had “secretly invoked” the Insurrection Act of 1807 to stop a “treasonous rebellion” by both Democrats and Republicans. 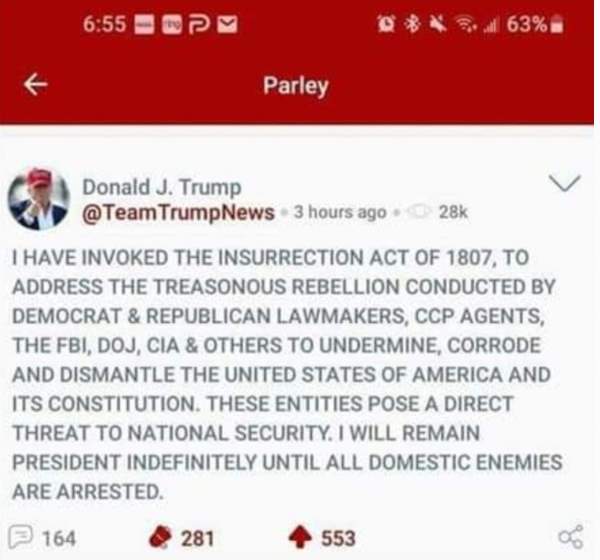 In May 2022, Media Matters reported that former journalist Naomi Wolf pushed a separate variation on this conspiracy theory in an interview with right-wing personality Charlie Kirk.

Wolf claimed that the World Health Organization (WHO) was poised to send mercenaries into the U.S. through Canada “by next week,” should the U.S. enter into a “proposal treaty” set forth by the World Economic Forum (WEF), a lobbying group with member companies from several countries.

“It’s one thousand percent correct that if the U.S. becomes a signatory to the World Economic Forum Proposal Treaty, we can expect to see mercenaries on our shores,” she said. “Or we can expect to see, as [Michele] Bachmann pointed out, the U.S. military doing the bidding of the WHO.”

There is no evidence that the WEF has put forth a “treaty” on its own, but it has promoted a United Nations initiative that could lead to a legally binding agreement to end plastic waste, as well as a separate call for U.N. member nations to adopt of a “non-proliferation treaty” covering fossil fuels.

Wolf also claimed that it was “scary” that U.S. military planes were being used to deliver infant formula to the U.S. from Europe to account for a nationwide shortage and suggested that Americans would have to arm themselves.

“This is why our Founders gave us the Second Amendment, for exactly times like these,” she said. “They knew that it was harder to subjugate an armed population. But, you know, may that be the worst case scenario. I really hope that it doesn’t devolve into civil war, which is really what the next thing is in history when you have an occupying force, which is what the WHO will be, you know, by next week.”

Clarification 10/16/2019, 1:15pm: Updated to clarify that we have not yet received a response from Twitter.

Updated 5/24/2022, 12:46 p.m.: Updated with variation on the conspiracy theory promoting “secret” use of the Insurrection Act and an invasion by the World Health Organization. — ag