A photograph of a T-shirt bearing a caricature of Sen. Bernie Sanders (I-Vermont) that has since been criticized as anti-Semitic was taken at the Democratic National Convention in 2016.

On December 13 2019, in the wake of a column accusing Sen. Bernie Sanders (who is Jewish) of having an “anti-Semitism problem,” several people came forward to claim that a T-shirt with an anti-Semitic caricature of Sanders was sold at the Democratic National Convention (DNC) in July 2016:

Speaking of anti-semitism, this is the ONLY Bernie T-shirt sold at the 2016 Dem Convention, in the official gift shop. I know this wasn't his campaign merch: WHO "designed" this shirt? Who green lit it? @DNC @donnabrazile @TomPerez Who DENOUNCED it? Anyone? #FirstJewishPresident pic.twitter.com/kkqlCXLOUJ

Initially, only the image of the shirt being held up by an unidentified person in front of a nondescript wall circulated, but eventually self-identified Sanders delegates who claimed to have witnessed its sale also spoke up:

This is real. I was a 2016 delegate for Bernie. Checked in at hotel. Before I went to my room wanted to get a t-shirt to wear. When I saw this Bernie shirt in the official DNC hotel store, I was shocked and appalled. Their animosity for Bernie on display. #FirstJewishPresident https://t.co/5T664XYZnB

We found a video dated July 26 2016 published by NJ.com and headlined “Political memorabilia for sale at DNC,” which showed a reporter chronicling a merchandise stand at the DNC in late July 2016. The shirt was visible from the very beginning of the short clip, and was later displayed adjacent to shirts about Hillary Clinton’s candidacy and women’s rights: 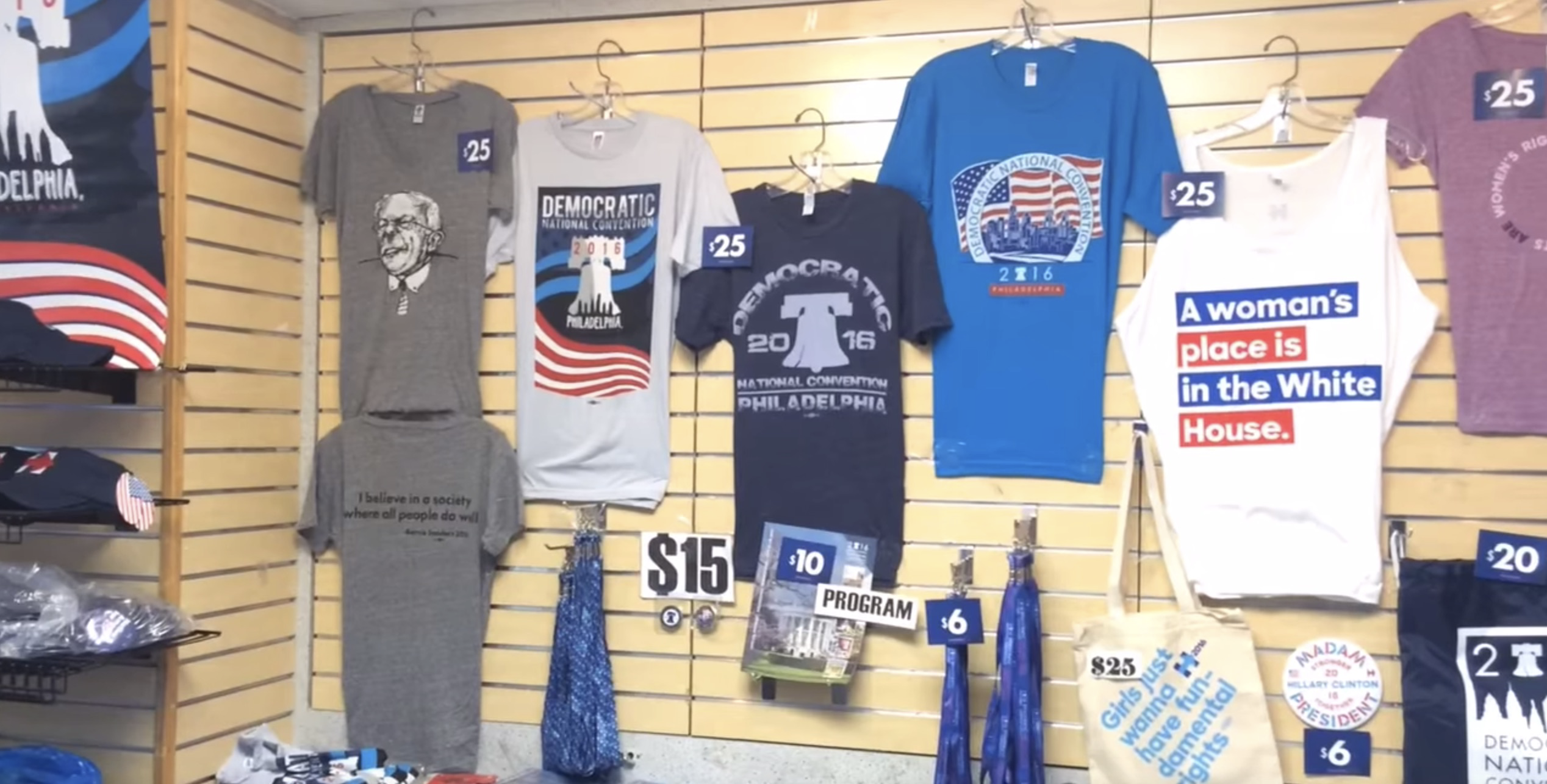 The caricature of Sanders was on the front of the shirt; on the back, text read:

I believe in a society where all people do well. Bernie Sanders [illegible date]

On July 27 2016, NJ.com published an article as a companion to the video with the headline, “Bernie T-shirt? ‘Madam President’ button? What you can buy at the DNC 2016.” It reported first on Clinton memorabilia, and continued:

Of course, you can also buy a $25 tee with a cartoon picture of Clinton’s former rival, Bernie Sanders.

But the merchandise here differs from the Donald Trump-laden gear at last week’s Republican National Convention in at least one noticeable way. There were stickers for sale at the GOP event in Cleveland that poked fun at Clinton (“Hil-liar-y,” one read) and Obama (“End of an Error”).

The shirt was number 32 or 33 in a photo gallery, and a caption read:

Clinton vs. Trump memorabilia on sale at the Democratic and Republican National Conventions

Images of a shirt with a caricature of Bernie Sanders described by users as anti-Semitic and sold as merchandise at the 2016 DNC appeared in December 2019 with little to no context. However, the shirt was one piece of several items for sale at the DNC in 2016; most of the memorabilia was Clinton-themed. The image was real and unaltered, and the shirt featured a quote by Sanders on its back.