An October 11 2019 Imgur repost of a Bernie Sanders tweet appeared alongside the caption “this is how you know he would fight for the people if he is elected our president”: 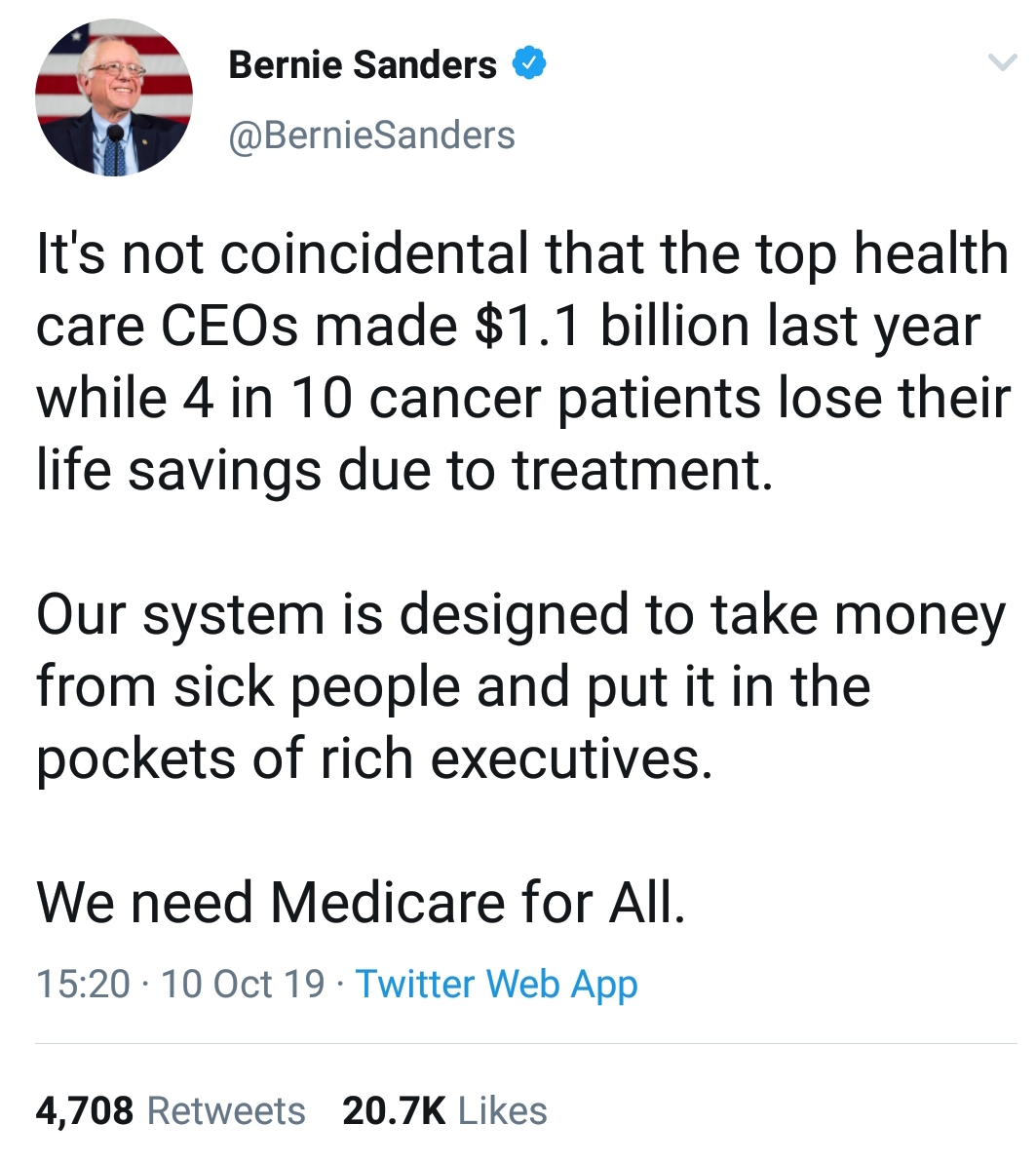 It’s not coincidental that the top health care CEOs made $1.1 billion last year while 4 in 10 cancer patients lose their life savings due to treatment.

Our system is designed to take money from sick people and put it in the pockets of rich executives.

We need Medicare for All.

The claim was originally tweeted by Sanders on October 10 2019, and it was accurately reflected by the screenshot. However, Sanders did not include a citation.

A second portion of the tweet claimed that this was not an accident, but rather was an intentional transfer of wealth from individual Americans to those profiting from cancer treatment. That portion of the tweet was more opinion, making it more difficult to definitively fact-check.

However, the first part, about four in ten cancer patients, was verifiable. An October 2018 press release for a study that appeared in the American Journal of Medicine explained:

Researchers assessed how patients’ net worth and debt changed two and four years post-diagnosis. The study authors controlled for demographic and clinically related variables, economic factors, mortality, and cancer-specific characteristics. Across the population, the average patient saw a loss of $92,098. Financial insolvency extended to 38.2 percent after four or more years.

Of the 9.5 million cancer diagnoses studied between 2000–2012, researchers discovered that 42.4 percent of patients (median age 68.6±9.4 years) spent all of their money, averaging $92,098. This follows disturbing news from earlier this year that 40 percent of Americans can’t afford to pay $400 in case of an emergency. The math is not adding up.

Insider.com reported that almost half of cancer patients went bankrupt due to treatment:

Overall, the total medical costs for cancer are $80 billion in the US.

That article noted that insurance was not a complete failsafe against financial disaster for people diagnosed with cancer:

From high deductibles to large copayments, cancer patients can end up with a huge stack of bills.

In addition, 40% to 85% of all cancer patients have to quit working while undergoing treatment, which creates a financial burden that can last for six months or longer.

In the same month, Advisory.com featured a story with a similar headline: “42% of cancer patients their spent entire life savings in 2 years after diagnosis.” The article went on to note that researchers had estimated that patients’ average net worth “fell by $92,098 after two years and by $51,882 after four years.” The claim was also discussed on YCombinator, where one commenter detailed the experiences of a family member:

I recently watched a family member go through this. A few things that were sobering to see:

– Three weeks in she was buried in paperwork. One chemo treatment would turn into 4-5 invoices from different subcontractors at a single hospital, some covered by her insurance, others not covered. Her insurer denied claims arbitrarily and made her go through a bunch of invasive and unnecessary procedures to prove her illness.

– Her insurer started calling her incessantly, insisting that she join some sort of program where they would “help” her make decisions about her care. It undermined the confidence she had in her doctors and the decisions she was trying to make, which is a terrible feeling for anyone to go through when they are sick with cancer and trying to survive.

– There were a series of insurance “land mines” on the horizon – forget to renew this thing on this random date 2 months from now? You’ve lost your insurance.

The whole healthcare and insurance system is a dark pattern, even for working adults who are fully covered.

Many of the articles referenced the same aforementioned study, which was published in the American Journal of Medicine in October 2018. Titled “Death or Debt? National Estimates of Financial Toxicity in Persons with Newly-Diagnosed Cancer,” the research examined the financial effects on Americans undergoing cancer treatment:

That study began by referencing Breaking Bad, a popular drama about a mild-mannered teacher diagnosed with cancer who goes on to become a drug kingpin in order to finance his treatment:

Breaking Bad is a critically acclaimed American television show about Walter White, who is diagnosed with lung cancer. Even though Walter worked two jobs and had health insurance, he still could not afford his medical care. To pay for his cancer treatment and to protect his family from financial burden, Walter illegally synthesized and sold methamphetamine. Although this is a fictional story, it highlights the reality of the economic burden of cancer in America.

Numerous confounding factors are referenced in the study. Among them was the exclusion of cancer patients who do not recover, in which case the costs of end-of-life care are not tallied:

Differences made by the 2010 passage of the Affordable Care Act (also known as the ACA or Obamacare) did not seem to dramatically affect the findings, despite its passage during the years researchers examined in the study. The law is mentioned once, in the course of referencing various disenfranchised groups, although researchers noted that having insurance had a protective effect:

Additionally, by relying on the HRS, Gilligan et al. were not able to comment on financial toxicity in disenfranchised groups, such as homeless or undocumented patients. Undocumented immigrants have the lowest rate of health insurance in America, thus increasing their risk of financial toxicity due to cancer. This is because they are not eligible for Affordable Care Act exchanges or Medicaid benefits. Undocumented immigrants can get health coverage through their employers, however most take low paying jobs that do not offer health insurance. Similarly, 60% of the homeless people in the U.S. are uninsured … Multiple reports, including the Gilligan et al. study, show that private insurance is protective against financial toxicity.

Insurance also posed different risks to the insured patients whose data appeared in the study:

Among patients enrolled in copayment assistance programs, 20% took less medication than prescribed, 19% filled half of their prescriptions, and 24% did not fill prescriptions. Over 7% of the patients in these programs delayed procedures, testing, chemotherapy or clinic visits.

Finally, the study found that costs were increasing and that the myriad difficulties cited were likely to worsen:

Unfortunately, direct medical costs are expected to increase by 40% for patients by 2020, thus exacerbating the financial burden of medical care for cancer patients in the United States.

[Researchers] reported that over 42% of patients fully depleted their assets and over 30% incurred debt (consumer, mortgage or home equity) by the second-year of their diagnosis.

That 42 percent of patients in the study represented the four in ten cancer patients that Sanders referenced — although technically it might be more accurate to say 4.2 out of ten patients would “deplete their assets” (in other words, “lose their life savings”) to pay for the necessary treatments. Thirty percent of study participants incurred debt, and the study omitted the 30 percent of patients who did not recover and died — presumably patients who incurred end of life costs and who certainly became unable to financially contribute to their households. Sanders’ claim was based on peer-reviewed research published in a medical journal, not polling or broad estimates, a claim which was thus quite well-supported.