Images depict the effects of lax immigration laws on California.

On April 24 2019, a Facebook user shared the following images and status update (archived here), purportedly showing images from California that included piles of trash on a beach and by roads and trails: 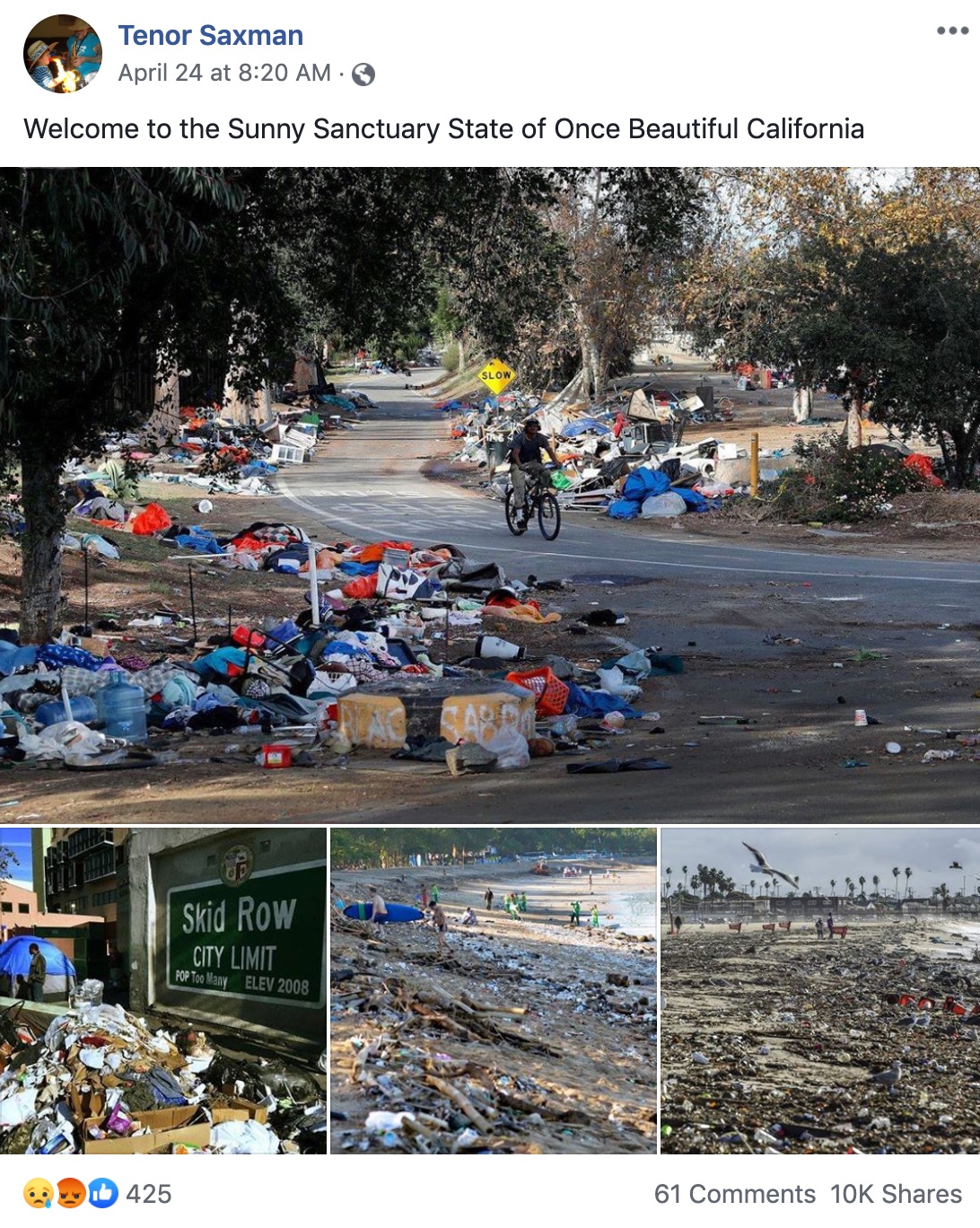 In the status update (“Welcome to the Sunny Sanctuary State of Once Beautiful California”), the user heavily implies the images here show standard sights and situations which directly resulted from California’s supposedly lax immigration laws.

At the top of the four-image set is a photograph of a man riding a bicycle on a road surrounded by debris. The same image accompanies a March 2018 opinion item published by the Los Angeles Times, and its caption reads:

A bicyclist rides past trash piles from the Santa Ana River homeless camp after it was cleared and more than 700 people relocated in Anaheim in February [2018]. (Los Angeles Times)

From the little information provided in the caption, it appeared that the photograph depicted a specific event (the relocation of 700 homeless people in February 2018) versus business as usual for the area. A March 2018 Orange County Register article featured slider images of before and after the residents were moved, and a previous piece by the same organization chronicled the effort to move the approximate camp’s residents. Newsweek reported that the eviction of a three-mile long encampment “led to the removal of over a thousand pounds of human waste, 5,000 needles and about 250 tons of trash.”

The photograph on the bottom right of the Facebook post shows a California beach, and that is where the accuracy of its description ends. This photo originally appeared in a February 2019 Orange County Register story about the aftermath of a storm at Seal Beach. Once again, the article (“After storms, Seal Beach looks like a landfill blanketed with trash”) had absolutely nothing to do with immigration, and that outlet explained why debris littered the shore:

During dry summer months, pristine Southern California beaches draw millions of visitors. But during the wet season after heavy storms, the beaches can look more like landfills as trash travels down waterways, onto the sand and into the ocean. The trash was a familiar sight along the coast, especially where inland rivers met with the ocean.

The area along the San Gabriel River, which borders Seal Beach and Long Beach, can be especially littered after it rains. The mouth of the river funnels runoff from 52 inland cities straight into the ocean, with trash and debris flowing down storm drains.

A photograph on the bottom middle of the post did not even show California — or anywhere in the United States, for that matter. It was taken in Jakarta, Indonesia in either February 2016 or 2017. Captions for the image read:

Finally, the image at the bottom left was a stock photograph taken on January 26, 2018 in Los Angeles. Its caption read:

Trash lies beside the Skid Row City Limit mural as the city begins its annual homeless count in Los Angeles, California on January 26, 2018. [Thousands] of volunteers will fan out across Los Angeles County during the three-night count of homeless people whose population is estimated to be nearly 60,000 strong. / AFP PHOTO / Mark RALSTON (Photo credit should read MARK RALSTON/AFP/Getty Images)

That image accompanied an October 2018 LAist piece about ongoing tensions between Skid Row’s homeless population and quality of life enforcement efforts undertaken in the area, titled “Is LA Really Going To Federal Court To Argue It Can Seize And Destroy Homeless People’s Property?” A then-recent lawsuit filed on behalf of the area’s homeless population was described in the article:

One of the plaintiffs, Carl Mitchell, claims the city confiscated and destroyed his possessions, following his arrest for allegedly stealing a shopping cart. He says he was released from police custody 18 hours later on a 40 degree winter night without his blankets, medication, and identifying documents. According to court documents, Mitchell slept that night on the sidewalk beneath a single blanket he found on the street, with no way to keep warm.

Another, Judy Coleman, alleges that she developed pneumonia after the city impounded her blankets, medication, and walker.

A month after the case was filed [in March 2016], a federal judge issued a restraining order against Los Angeles that effectively barred the city from conducting homeless encampment cleanups on Skid Row.

As further detailed in the piece, tensions between homeless residents in the area and police persisted for years. Frequent “cleanups” of their encampments led to images such as the one seen in this post, but once again that image depicted a specific event — a “homeless count” done once a year in the greater Los Angeles area. An “About” page for the Greater Los Angeles Homeless Count explained:

Every year, we conduct a census of the homeless population through the Greater Los Angeles Homeless Count. There are four components to the Count. Each of these components plays a vital role in understanding the state of homelessness in Los Angeles[.]

The Los Angeles Homeless Services Authority (LAHSA) is a joint powers authority of the city and county of Los Angeles, created in 1993 to address the problems of homelessness in Los Angeles. LAHSA is the lead agency in the HUD-funded Los Angeles Continuum of Care, and coordinates and manages over $300 million annually in federal, state, county, and city funds for programs providing shelter, housing, and services to people experiencing homelessness. Since 2005, LAHSA has coordinated the Greater Los Angeles Homeless Count.

According to both the image’s caption and LAHSA, the photograph was taken on the night of the yearly census of homeless people in the Greater Los Angeles area.

Of the four photographs seen in the viral Facebook post, two (the top and bottom left) showed specific instances of cleanup, relocation, or census-taking of homeless Californians, not immigrants. Neither image was associated with immigration or California’s immigration laws in any news reporting. The center bottom photograph was taken in Indonesia and had nothing to do with California. The remaining image depicted Seal Beach after a storm and showed the effects of plastic pollution, not homelessness or immigration. All four were taken out of context in an attempt to make a point, which fell apart completely when we traced the actual origin of the images.