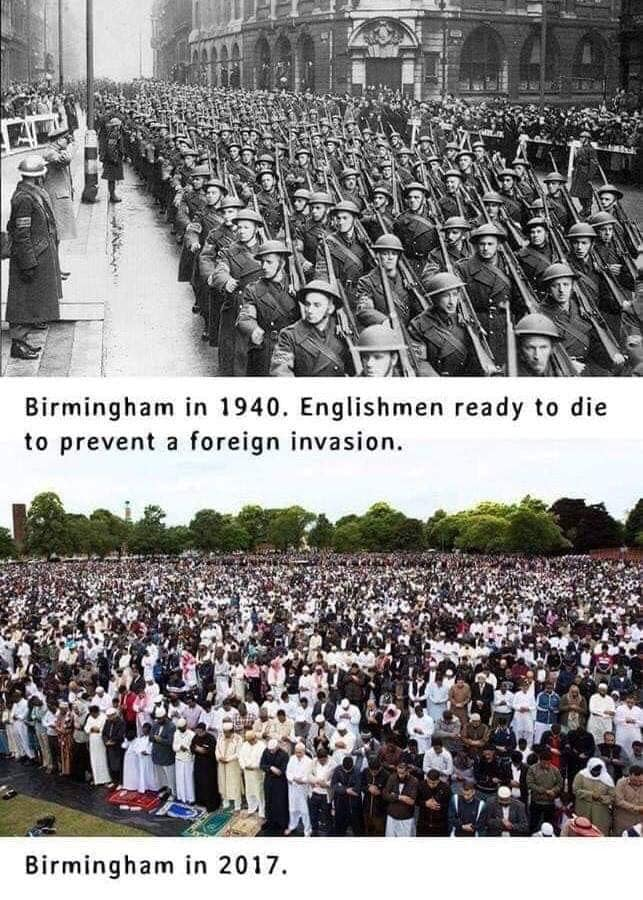 At the top was a black and white image of what appeared to be soldiers, and at the bottom a color image of people bowing their heads in prayer. The respective captions read:

Birmingham in 1940. Englishmen ready to die to prevent a foreign invasion.

Although neither context nor links appeared alongside iterations of the post, it seemed to imply that the second image was representative of daily life Birmingham in 2017.

The image at the top was not well-distributed online, and a reverse image search led largely to defunct sites of dubious origin. But the historical “Staffordshire Home Guard Website” hosted a copy of the photograph on their website alongside another, dated March 23 1941, with the caption:

The following image shows another parade in the city centre: this one occurred on Sunday, 23rd March 1941. It shows a Drumhead Service, held on the Municipal Car Park, arranged by the Chaplain, the Archdeacon of Aston. This was followed by a march-past outside the Council House with the G.O.C. Western Command, General Sir Robert Gordon-Finlayson, taking the salute.

A version of the image was also published by the site CreatedInBirmingham.com in 2010, but that offered no additional information. The Home Guard was “an armed citizen militia supporting the British Army during the Second World War,” in service between 1940 and 1944.

As far as the second image went, it appeared in a Guardian piece titled “Eid al-Fitr celebrated around the world- in pictures,” published in July 2015. The caption said:

Tens of thousands of people pray together in Small Heath Park.

A linked July 2015 article indicated that a “record-breaking 60,000 men, women and children, converged on Small Heath park in Birmingham to mark the end of Ramadan at what is billed as the largest gathering of Muslims in Europe” at the time of publication. The event had first been held in 2012, and three years later in 2015, attendance had skyrocketed. Attendees traveled to Birmingham for an event likened to the Glastonbury music festival, and not all those present were local:

When it was first staged in 2012, only a few thousand people turned up. Around 40,000 took part 12 months ago but this year’s celebration easily topped that … The traffic tailback – four miles at one point – suggested it was not just local people in attendance. Husna Khan, 21, travelled from Sheffield to meet friends. “Eid is a lovely reason to get together. This is a bit like a music festival for us – our Glastonbury.”

A local mosque spokesman acknowledged that the event was the target of negative news coverage, but added that its message was one of unity, and that non-Muslims were present and welcomed:

Waseem Khan, spokesman for the Green Lane mosque, said the Celebrate Eid event was reviving in inner city Birmingham a tradition of Muslims praying together out in the open.

He accepted that even in a tight-knit community like this, mosques can sometimes operate in isolation. “But this is bringing everyone out together to show we are one community. Look around here; there are people of Arabic, Asian, African origin. There are converts here, there are non-Muslims.”

This part of Birmingham often attracts negative headlines. The Trojan Horse scandal – the claims that there had been a concerted effort by hardline, conservative Muslim men to infiltrate a number of Birmingham schools and run them on religious lines – is still raw here. “There can be negative feelings towards Muslims,” said Khan. “We hope that this sort of event can show that Muslims are not terrorists, that we are members of this community, that we are all Brummies.”

The image and event shown took place in 2015, not 2017. As of 2018, 27 percent of the Birmingham population identified as Muslim, accounting for roughly six percent of the UK population overall in 2017. Similar pictures were captured at the same event in Birmingham in 2019.

For perspective, an archival image similar to the first photograph depicted an Eid al-Fitr prayer service in Surrey a century before, in 1915. The presence of Muslims in the United Kingdom was not new in 2017, and this image was captured years prior to the “1940” image of Birmingham’s Home Guard:

Both images appear to be labeled inaccurately. The top image was most likely taken during a parade in March 1941. The bottom photograph was captured in 2015, not 2017. Those differences are largely semantic, but the broader context is forced and also inaccurate, clearly attempting to push a specific anti-Muslim narrative. The second photograph captured the largest Eid al-Fitr event in all of Europe, during which many traveled to Birmingham specifically to participate. It was not a daily occurrence for thousands of Muslim residents to gather in the park to pray, and in fact it represented a large celebration for the end of Ramadan.

Despite accuracy in the date range and location given for both photographs, they were presented together to elicit a response and to agitate social media users. Using the 2015 reporting’s comparison to Glastonbury, the curation style used could similarly be used by pairing World War II reserve troops alongside festival-goers in those larger events to make the same extremely misleading point.