A February 2021 article published by The Times (UK) bore the headline, "Doctors and experts advise against taking experimental jab." 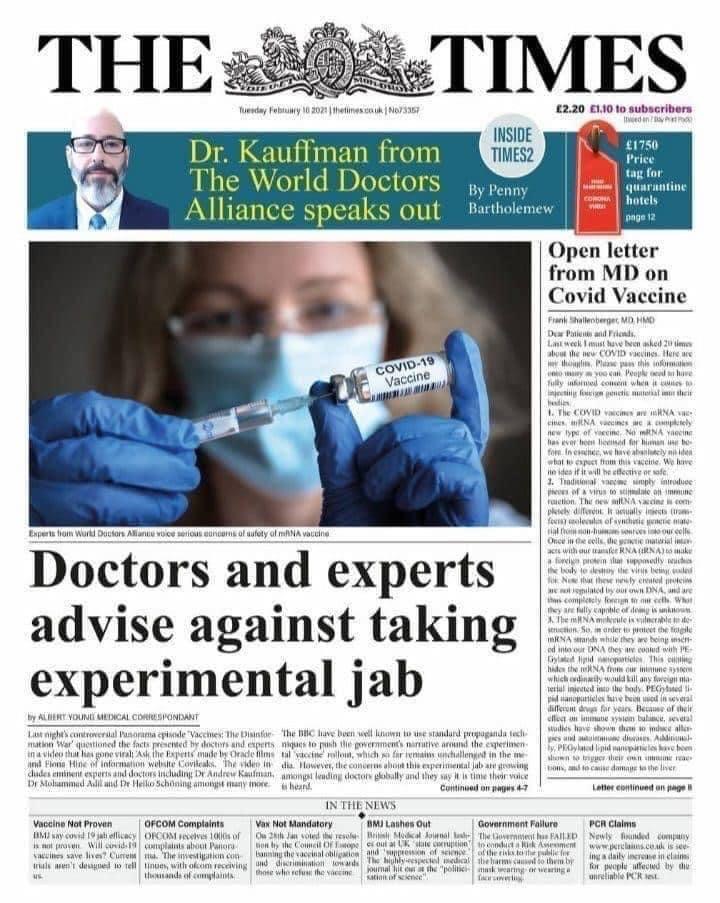 We first spotted the circulating screenshot via a March 3 2021 post on the page “DAWI (Detox, AntiVax and Woo Insanity) 2, Electric Woogaloo.”  That post included a screenshot from the Facebook group “Vaccine Talk: An Evidence Based Discussion Forum”:

The “DAWI 2” page shared the screenshot as a critique of anti-vaccine content. However, we located several contemporaneous posts featuring the same screenshot, apparently spreading without sanction across social media, particularly Facebook.

THE TIMES
Tuesday February 16 2021
Dr. Kauffman from The World Doctors Alliance speaks out (By Penny Bartholemew)
Doctors and experts advise against taking experimental jab
By ALBERT YOUNG MEDICAL CORRESPONDANT
Last night’s controversial Panorama episode ‘Vaccines: The Disinformation War’ questioned the facts presented by doctors and experts in a video that has gone viral; ‘Ask the Experts’ made by Oracle films and Fiona [illegible] of information site Covileaks. The video includes eminent experts and doctors including Dr. Andrew Kaufman, Dr. Mohammed Adil and Dr. Heiko [illlegible] amongst many more.
The BBC have been well known to use standard propaganda techniques to push the government’s narrative around the experimental ‘vaccine’ rollout, which so far remains unchallenged in the media. However, the concerns about this experimental jab are growing amongst leading doctors globally and they say it is time their voice is heard. Continued on pages 4-7
Underneath that, a section titled “In The News” featured six separate “stories,” all related to the pandemic, the vaccine, testing, or masks:
Vaccine Not Proven
BMJ say covid-19 jab efficacy is not proven. Will covid-19 vaccine save lives? Current trials aren’t designed to tell us.

Vax Not Mandatory
On 28th Jan voted the resolution by the Council of Europe banning the vaccinal obligcation and discrimination towards those who refuse the vaccine.

BMJ Lashes Out
British Medical Journal lashes out at UK ‘state corruption’ and ‘suppression of science.’ The highly-respected medical journal hit out at the ‘politicisation of science’.

Government Failure
The Government has FAILED to conduct a Risk Assessment of the risks to the public for the harms caused to them by mask wearing or wearing a face covering.

To the right of the “Doctors and experts advise against taking experimental jab” article was a column titled “Open letter from MD on Covid Vaccine,” attributed to a “Frank Shallenberger, MD, HMD.” It read:

Dear Patients and Friends,
Last week I must have been asked 20 times about the new COVID vaccines. Here are my thoughts. Please pass this information onto many as you can. People need to have fully informed consent when it comes to injecting foreign genetic material into their bodies.

That particular letter was real, in that it was written and shared by Nevada-based chiropractor and “alternative medicine” advocate Frank Shellenberger. It was not published on the front page of The Times on February 16 2021 (nor on any other date), but its inclusion was a clever twist of disinformation, because it adds a certain veneer of respectability and authenticity; people searching for the letter would be likely to find iterations of it circulating elsewhere, and thus conclude it was indeed published in that newspaper on that date.

As for the authenticity of the “Doctors and experts advise against taking experimental jab” headline, it was easily identified as false. For one thing, The Times pointed out the attempted hoodwinking themselves.

For another, it is also easy to double-check using third-party sites. This is the actual front page for the news organization on February 16 2021 — note that not only was the headline not “Doctors and experts advise against taking experimental jab,” it in fact read, “Vaccination is reducing admissions and deaths” and “New figures sugggest jab also cuts transmission,” leaving no doubt that this is disinformation all the way down.