Image depicts the Ku Klux Klan marching with a Trump/Pence banner, in a meme about "all you need to know about why you should vote blue in 2020."

On February 9 2020, a Facebook page called “The Truth Fairy” shared the following image, which purportedly showed the Ku Klux Klan marching with a Trump/Pence banner in support of the election (or re-election) of United States President Donald Trump: 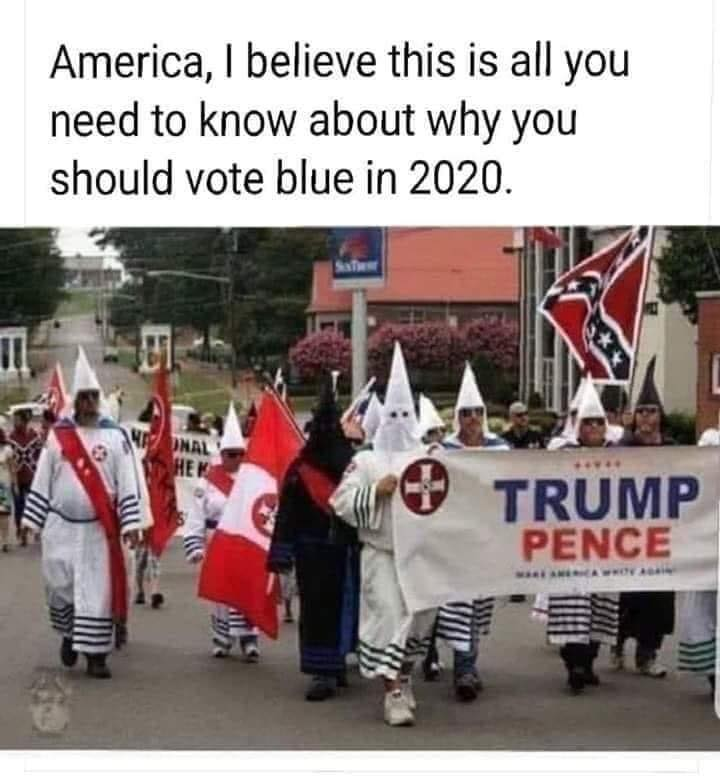 A photograph of people in white hoods carrying a Confederate flag featured a banner reading “TRUMP PENCE” and “MAKE AMERICA WHITE AGAIN.” Above the image, there was text that said:

America, I believe this is all you should know about why you should vote blue in 2020.

The photograph was blurry and displayed a small watermark. Its location was unclear (but a SunTrust Bank sign was visible in the background.) Some of the blurring was suspiciously present on the banner itself, which was of low resolution overall.

A cursory Google search did not invalidate the image, returning only identical iterations of the KKK purportedly marching with a “TRUMP PENCE” and “MAKE AMERICA WHITE AGAIN” banner. The term “ku klux klan 2017” autopopulated with the search, indicating the image had likely been around in some form since at least then: 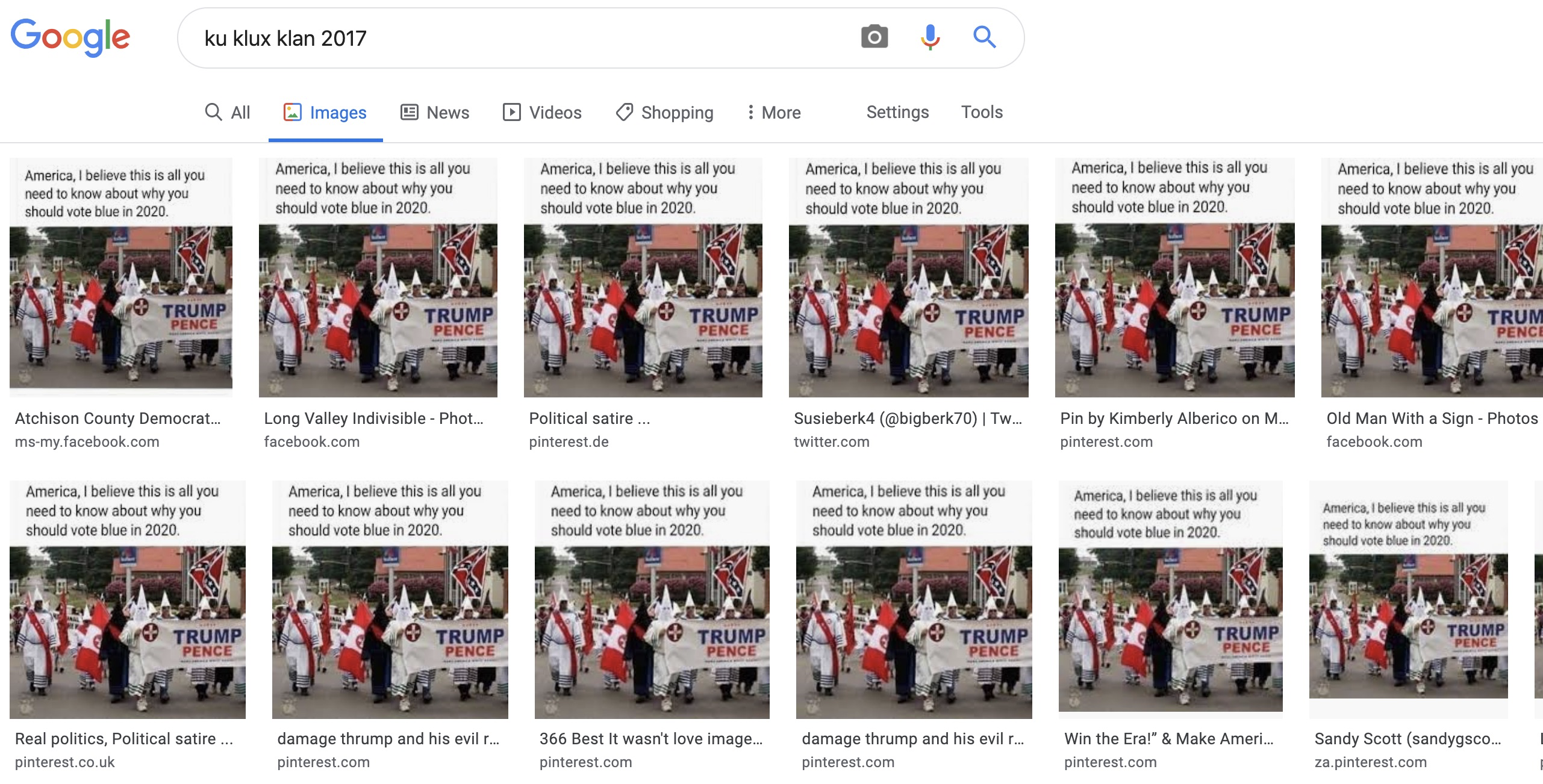 A different reverse search engine told a different story, however; this showed that the image came long before Donald Trump became president. Versions of the photograph appeared on the internet in 2009, six years before Trump had even announced his candidacy: 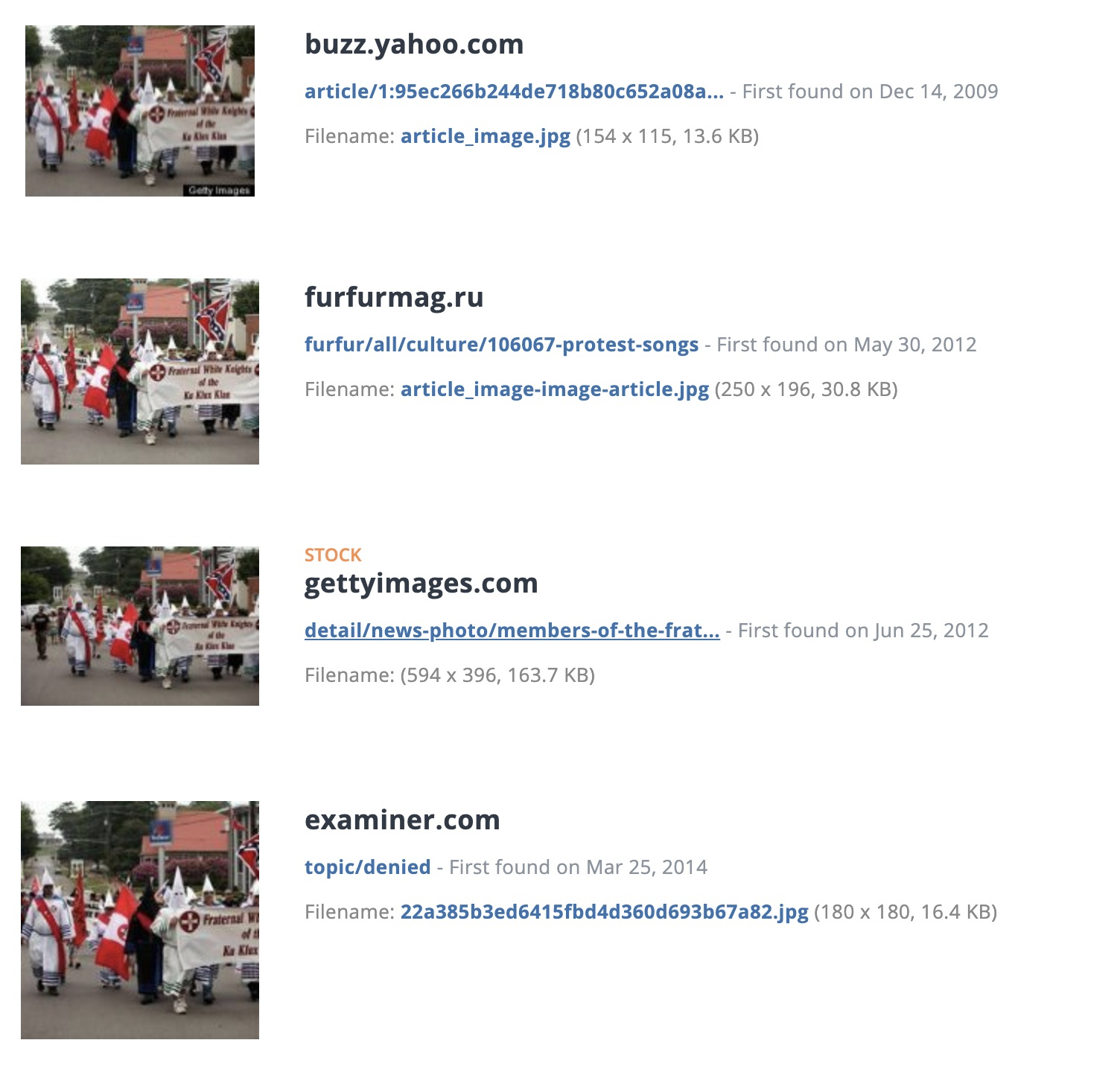 Although the actual banner itself was partially cut off in the frame, it did not bear the names of Trump nor Pence, nor did it say “make America white again.” From what was visible, it appeared to read “Fraternal White Knights of the Ku Klux Klan.”

One of the live links returned in the search was Getty Images, which provided a date and description for the photograph. Chronology notwithstanding, the march had nothing to do with Trump or Pence. That photograph in fact showed an annual Ku Klux Klan gathering in Pulaski, Tennessee, the 11th Annual Nathan Bedford Forrest Birthday March on July 11 2009. Getty Images hosted a larger set of photographs from that same event:

Ku Klux Klan Holds Annual Gathering In Tennessee
PULASKI, TN – JULY 11 [2009]: Members of the Fraternal White Knights of the Ku Klux Klan participate in the 11th Annual Nathan Bedford Forrest Birthday march July 11, 2009 in Pulaski, Tennessee. With a poor economy and the first African-American president in office, there has been a rise in extremist activity in many parts of America. According to the Southern Poverty Law Center in 2008 the number of hate groups rose to 926, up 4 percent from 2007, and 54 percent since 2000. Nathan Bedford Forrest was a lieutenant general in the Confederate Army during the American Civil War and played a role in the postwar establishment of the first Ku Klux Klan organization opposing the reconstruction era in the South. (Photo by Spencer Platt/Getty Images)

A photograph shared by “The Truth Fairy” purportedly showing the Ku Klux Klan or KKK marching with a Trump/Pence banner was clearly doctored. The original photograph was taken in Pulaski, Tennessee in July 2009, years before Trump campaigned or was elected.