A fast-spreading Twitter meme shared by James Woods took aim at a purported statement by Bernie Sanders at the February 19 2020 debate, during which Sanders purportedly claimed that he planned to raise taxes so that people earning $29,000 a year would be taxed at a rate of 52 percent:

For those who can do simple arithmetic, here are some fun numbers on Bernie Sanders’ harebrained socialist schemes: pic.twitter.com/hQ6iwexzz6

The same claim appeared in text form on Twitter and forums, reading:

Bernie Sanders said at the debate that he wants minimum wage to be $15 per hour.

Bernie Sanders wants free health care for all and was asked how he would pay for it. His answer was raise taxes to 52% on anybody making over $29,000 per year.

Several versions ended with “math is fun” or “think before you vote.”

Of first note was that NBC News (which hosted the debate) provided a complete transcript of the debate. In its entirety, the number 29 or $29,000 appeared only three times. The first and sole mention by Sanders was completely unrelated to his tax proposals, and it had to do with his health records. Sanders said:

Second of all, we released the full — my whole 29 years in the Capitol, the attending physician, all of my history, medical history.

The next two mentions of the number “29” came from Pete Buttigieg. Of the two, the first mention by Buttigieg and second overall may have been the source for the rumor:

But I’m actually less concerned about the lack of transparency on Sanders’ personal health than I am about the lack of transparency on how to pay for his health care plan, since he’s said that it’s impossible to even know how much it’s going to cost, and even after raising taxes on everybody making $29,000, there is still a multi-trillion-dollar hole.

In the third and final mention, moderator Chuck Todd referenced Buttigieg’s admiration for Sanders in the form of an essay Buttigieg had written several years previously. At that time, Buttigieg reiterated his previous remarks:

BUTTIGIEG: No. Look, it’s true that I was into Bernie before it was cool.

BUTTIGIEG: He was a congressman at the time [I wrote the essay]. And the qualities I admired then are qualities I still respect a great deal. I never said that I agree with every part of his policy views, then or now. But I appreciate that at least he’s straightforward and honest about them. He’s honest about the fact that taxes will go up on anybody making more than $29,000 to fund his health care plan, although, again, a little bit vague about how the rest of that gets…

SANDERS: You’re not being honest. Premiums would be eliminated.

BUTTIGIEG: But you’re still raising those taxes. And when you do it…

SANDERS: But we’re saving people money because they don’t pay any premiums, out-of-pocket expenses, co-payments, or deductibles. They’re going to be much better off.

Sanders refuted the claim and added that under his plan, any increase in taxes would be offset by a reduction in health care costs, and that his plan would be “saving people money because they don’t pay any premiums, out-of-pocket expenses, co-payments, or deductibles.” Whoever started the text meme shared by Woods attributed Buttigieg’s remarks to Sanders, and then mischaracterized those remarks.

A claim that Sanders said any such thing was Not True, based on the transcript linked above. But does Sanders’ plan raise taxes to 52 percent on people earning $29,000, or $50,000, or more?

On sanders.senate.gov, a document (“OPTIONS TO FINANCE MEDICARE FOR ALL”) appeared to be the source of the misleading claims. On page three of six pages, the plan released by Sanders read:

Emphasis on the final line is ours — according to the actual plan released by Sanders, the 52 percent tax rate was mentioned. However, it was for households with income over $10 million, and not “people making $29,000 a year.”

However, those marginal tax rates in the excerpted section involved people making between $250,000 and more than $10 million. A section on page two proposed a four percent (not 52 percent) tax on households to fund Medicare for All. In the same section, Sanders posited that the average middle class family would save $4,400 under that plan in contrast with current outlays for taxes and health insurance — the same thing he said to Buttigieg at the debate.

4 percent income-based premium paid by households
Revenue raised: $3.5 trillion over ten years.
The typical middle class family would save over $4,400 under this plan.
Last year the typical working family paid an average of $5,277 in premiums to private health insurance companies. Under this option, a typical family of four earning $50,000, after taking the standard deduction, would pay a 4 percent income-based premium to fund Medicare for All – just $844 a year – saving that family over $4,400 a year. Because of the standard deduction, families of four making less than $29,000 a year would not pay this premium.

We also plugged the $29,000 figure into an unofficial site based on Sanders’ plan, BernieTax.com. As an estimate, it returned the following results: 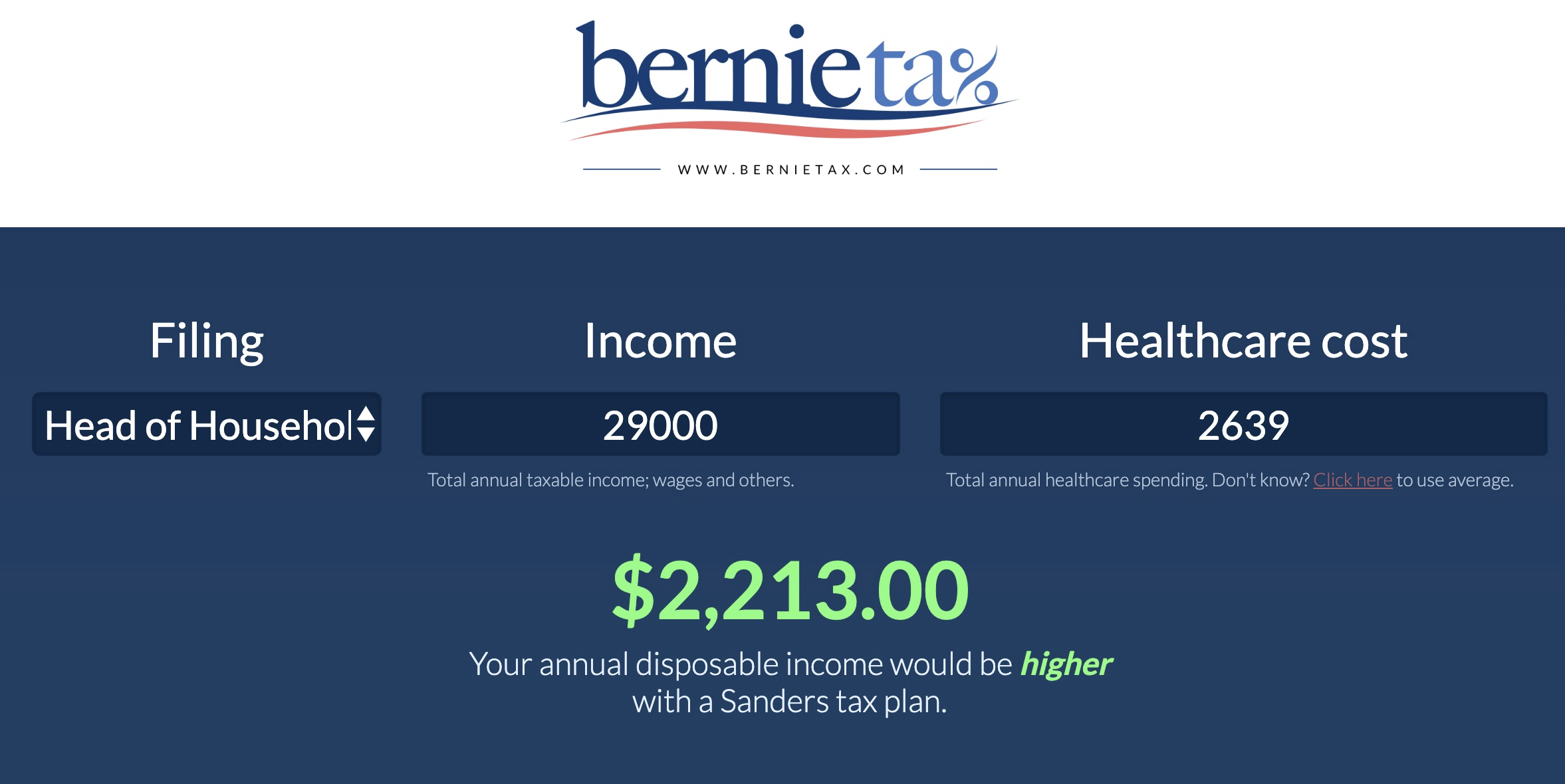 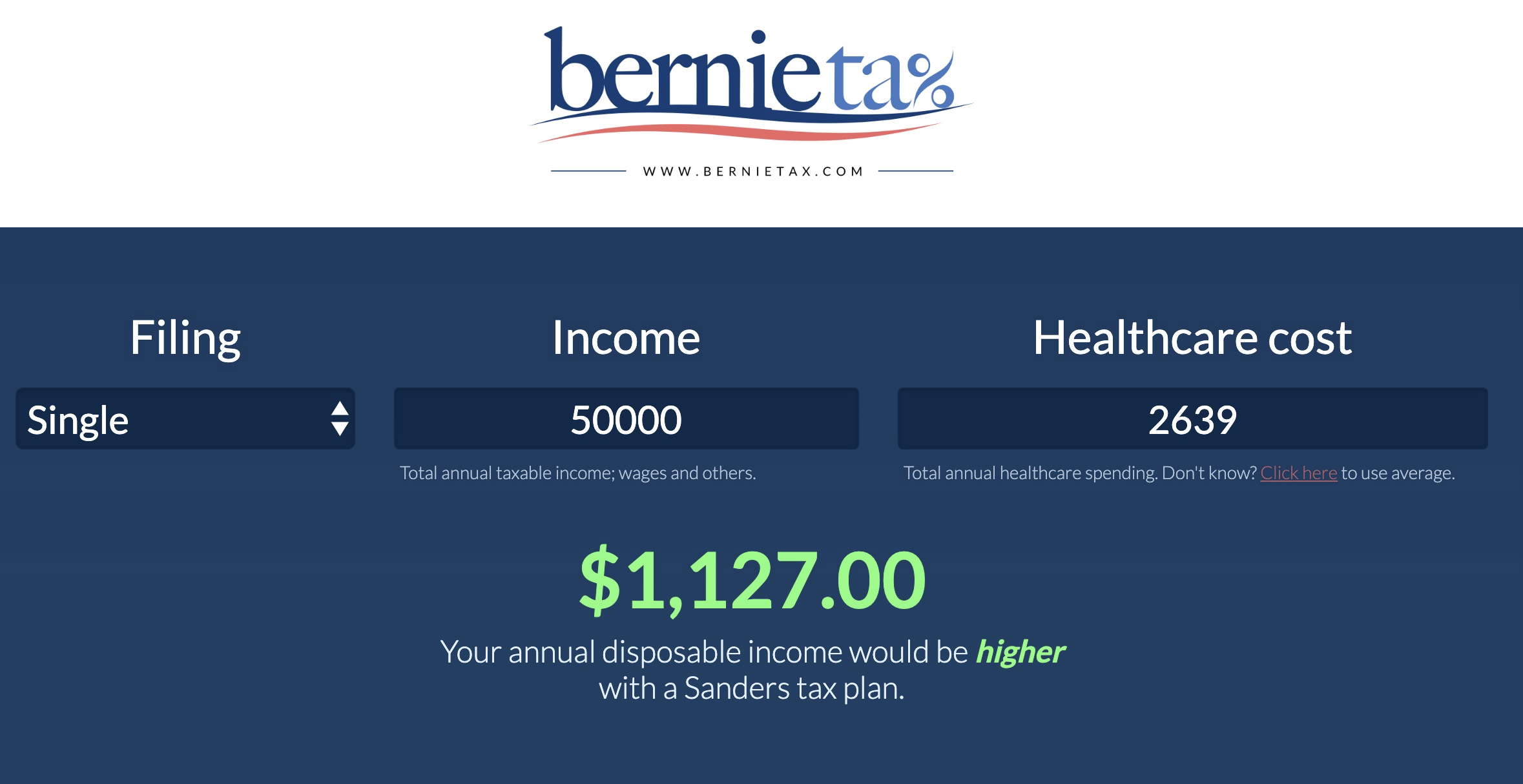 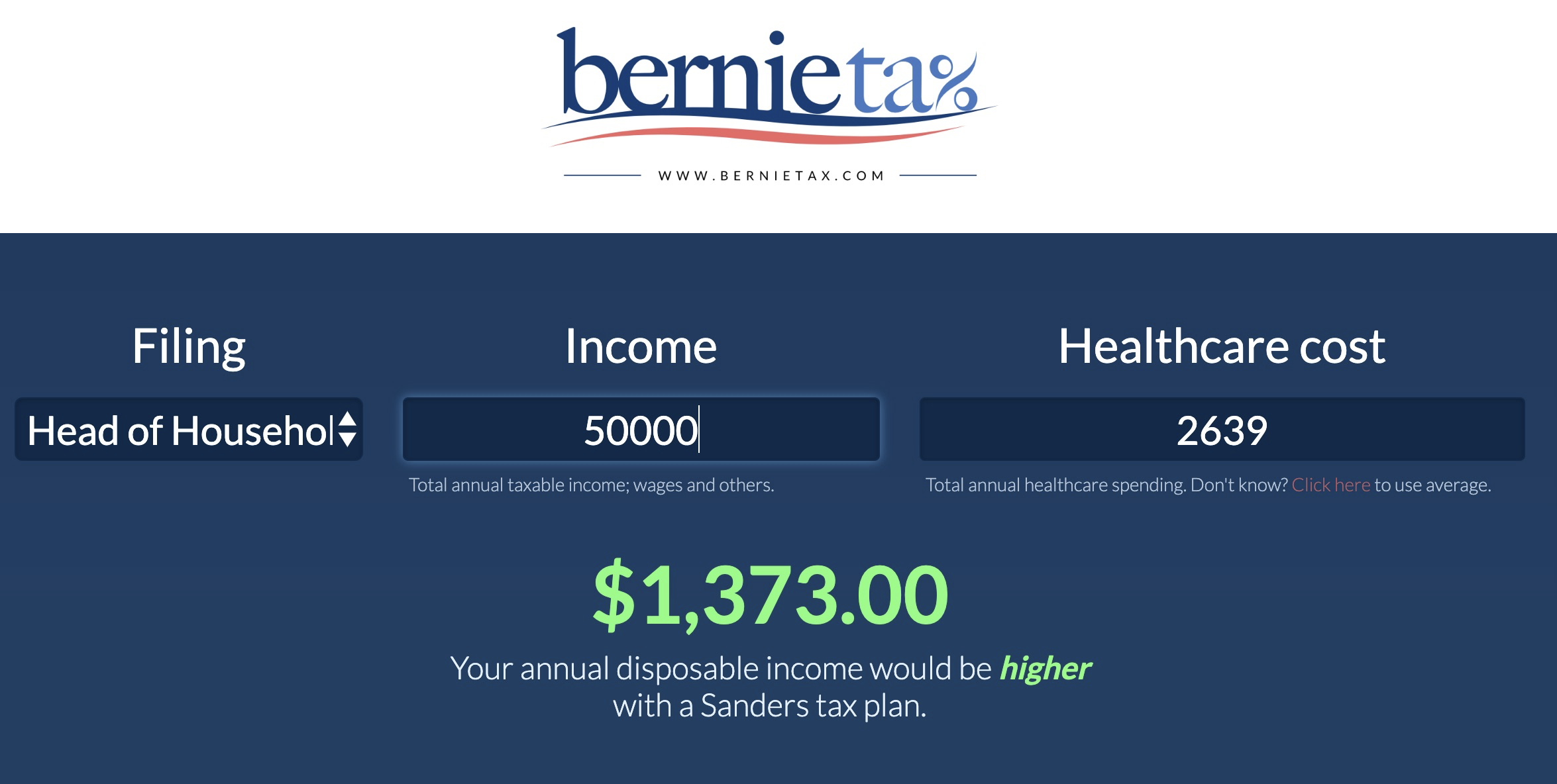 Woods’ meme falsely claimed that at the February 19 2020 Democratic debate, Bernie Sanders said he would “raise taxes to 52% on anybody making over $29,000 per year.” Sanders said no such thing, and the claim bore only passing resemblance to Buttigieg’s quoted remarks above. Sanders’ proposed 52 percent tax was on households making more than $10 million a year, and a four percent tax was proposed for households making more than $29,000 a year. Under that same plan, Sanders estimated the same tax as $844 on a family of four earning $50,000, and the same family would, under that plan, save $4,400 in healthcare expenses to 2020 rates.