The Australian "Gympie-Gympie" plant causes such intense pain that touching it is a likely death sentence.

While the damage caused by the plant species Dendrocnide moroides has been recounted in various outlets, one graphic spreading in August 2019 adds apocryphal claims to the stories around it.

The graphic shows a photograph of the plant, commonly known as the “Gympie-Gympie,” with a caption reading:

The world’s most poisonous plant is Gimpy Gimpy [sic]. IT is found in Australia. Merely touching it is so painful that it has led many animals as well as humans kill themselves. The pain is described as a mixture of an acid burn and electric shock. Mostly anyone who touches it prefer to commit suicide, than bear the pain. 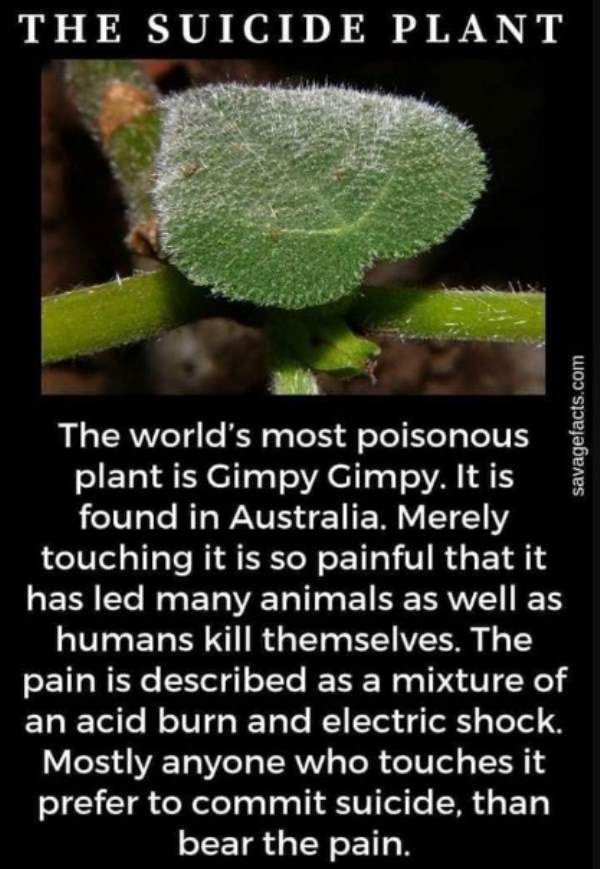 It is true that a mere touch of a Gympie-Gympie leaf’s hairs can result in searing pain; in a September 2018 story, scientist Marina Hurley described the plant’s touch as being “like being burnt with hot acid and electrocuted at the same time.” She wrote:

An intense stinging, burning pain is felt immediately, then intensifies, reaching a peak after 20 – 30 minutes.

The hairs can remain in the skin for up to six months, with stings recurring if the skin is pressed hard or washed with hot or cold water.

Not only do you feel pain from where you are stung, if it is a really bad sting, within about 20 minutes your lymph nodes under your arms swell and throb painfully and feel like they are being slammed between two blocks of wood.

The intense throbbing pain from both the sting and from your lymph nodes can last anywhere from 1-4 hours, depending upon what species you touched, the amount of skin that was stung, and how hard you came into contact with the plant.

However, most reports of deaths — self-induced or otherwise — caused by the plant appear to be apocryphal or unproven, such as those recounted in a 2009 Australian Geographic story about Hurley’s research around the closely related Gympie-Gympie tree (Dendrocnide excelsa). A former Australian servicemember wrote to Hurley in 1994 that after encountering the Gympie-Gympie while training during World War II, one comrade went “as mad as a cut snake” from pain after being stung and another shot himself after mistakenly using it to wipe himself::

North Queensland road surveyor A.C. Macmillan was among the first to document the effects of a stinging tree, reporting to his boss in 1866 that his packhorse “was stung, got mad, and died within two hours”. Similar tales abound in local folklore of horses jumping in agony off cliffs and forestry workers drinking themselves silly to dull the intractable pain.

He’s had too many stings to count but Ernie Rider will never forget the day in 1963 that he was slapped in the face, arms and chest by a stinging tree. “I remember it feeling like there were giant hands trying to squash my chest,” he said. “For two or three days the pain was almost unbearable; I couldn’t work or sleep, then it was pretty bad pain for another fortnight or so. The stinging persisted for two years and recurred every time I had a cold shower.”

“It can certainly be painful and could potentially last up to weeks or a couple of months of fairly intense pain,” said John Downs, a medical toxicology fellow at the Virginia Poison Center at Virginia Commonwealth University. “But I couldn’t find any solidified accounts of anyone committing suicide to try to end the pain. What I did find is that these are not uncommon to find in Australian emergency departments and can be treated pretty readily there.”

One study published in December 2013 in the Journal of Wilderness and Environmental Medicine found that up to that point only one human death had been reported in connection with the plant, in 1922.

While this particular plant is native to Australia — it was first named the “Gympie bush,” as is the nearby region of Gympie, Queensland, after an indigenous name for the stinging tree — Downs did note that some species found in the United States can cause hives if touched in a similar fashion, though with nowhere near the amount of pain. He also advised readers researching poison-related claims to contact local poison control experts for more accurate information.