A video shot in San Diego shows tanks being brought into the city for use by the military.

In another case of social media users and disreputable blogs stoking fear via disinformation amid the COVID-19 pandemic, footage of a routine shipment of tanks in two states has been interpreted  — and then disseminated — as an omen of something more ominous.

The original tweet, posted on March 20 2020, showed footage of a row of tanks being shipped via train alongside the caption, “Tanks have arrived in San Diego.” It has been shared thousands of times on the platform and regurgitated by other countless more dubious accounts. 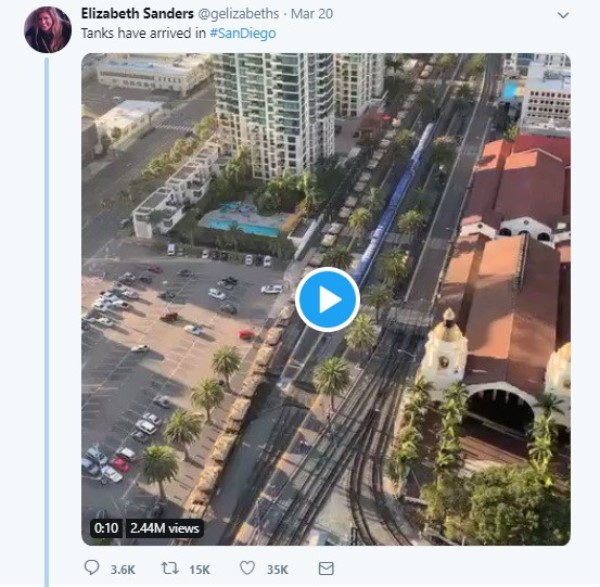 Sights such as this video are not as unusual as the casual reader might think. San Diego, which has several military bases and a very large concentration of military personnel, often ships vehicles by train; and as Popular Mechanics reported, while it’s difficult given the quality of the video to tell exactly what the vehicles in it are, shipments by rail are quite common all over the United States and have been for many years:

The U.S. Army and U.S. Marine Corps move heavy equipment by rail across America every month, and maybe every week. M1A2 Abrams tanks and M2A3 Bradley fighting vehicles typically travel long distances by rail because a train can carry hundreds of vehicles at once, and because it reduces wear and tear on heavy trucks that otherwise carry them around. A single U.S. Army division has about 700 Abrams and Bradleys and coordinating a cross-country movement of hundreds of trucks, each hauling a single 50- to 70-ton fighting vehicle, would be a logistical nightmare.

Nonetheless, the tweet was then picked up by a suspicious blog, “Entertane.com,” that merely recycled it and presented it as a stand-alone post (and adding the modifier “National Guard” to the “tanks” claim): 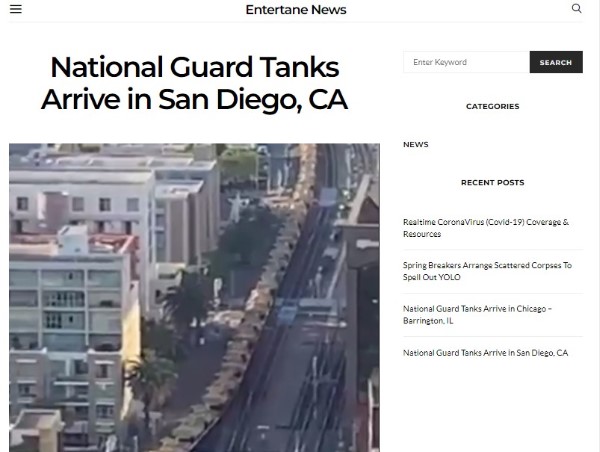 The blog utilized the same tactic a day earlier, regurgitating a tweet containing a claim that tanks had been spotted heading toward Chicago: 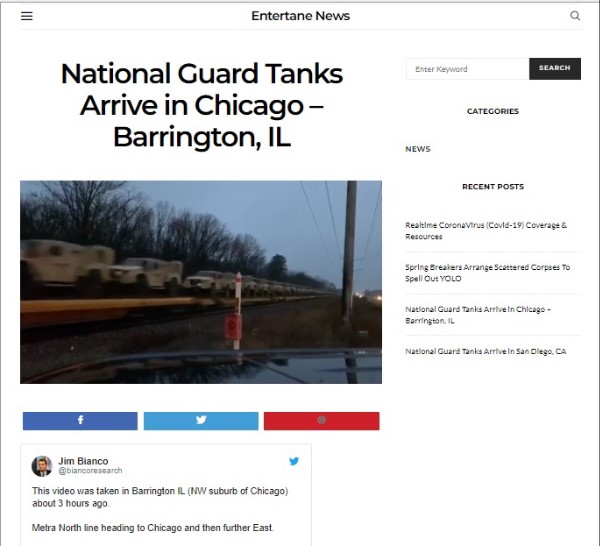 The Illinois claim was quickly refuted by the Pentagon, which also clarified that what are on the train in this video are not tanks, but tactical vehicles intended to replace or augment standard-issue Humvees:

To confirm what others have pointed out: these are new Joint Light Tactical Vehicles being transported by @USArmy Materiel Command from the factory in Oshkosh to Fort Bragg, NC. These deliveries by train to our bases nationwide are not infrequent and have nothing to do w COVID-19 https://t.co/6RNYfgAYhV

“Entertane News” should not be considered a reliable source. We noticed that it also republished a story by the Christian conservative humor site the Babylon Bee, but without labeling it as satire: 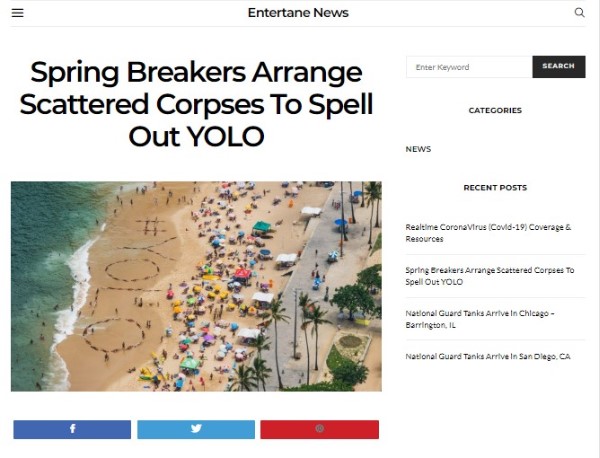 Although it linked to the site as a “source,” Entertane did not divulge that the original post was not meant to be taken seriously. Nor — given their track record — should any post on Entertane.