If you can't speak when calling 999 (the UK's version of 911), pressing 55 will alert the operator to your emergency.

In January 2020, a Facebook photograph of a printed sign purportedly provided valuable advice to callers of 999, several countries’ version of the United States’ 911 — claiming that for “silent help,” callers impeded from speaking could dial “55” to alert the service to an emergency: 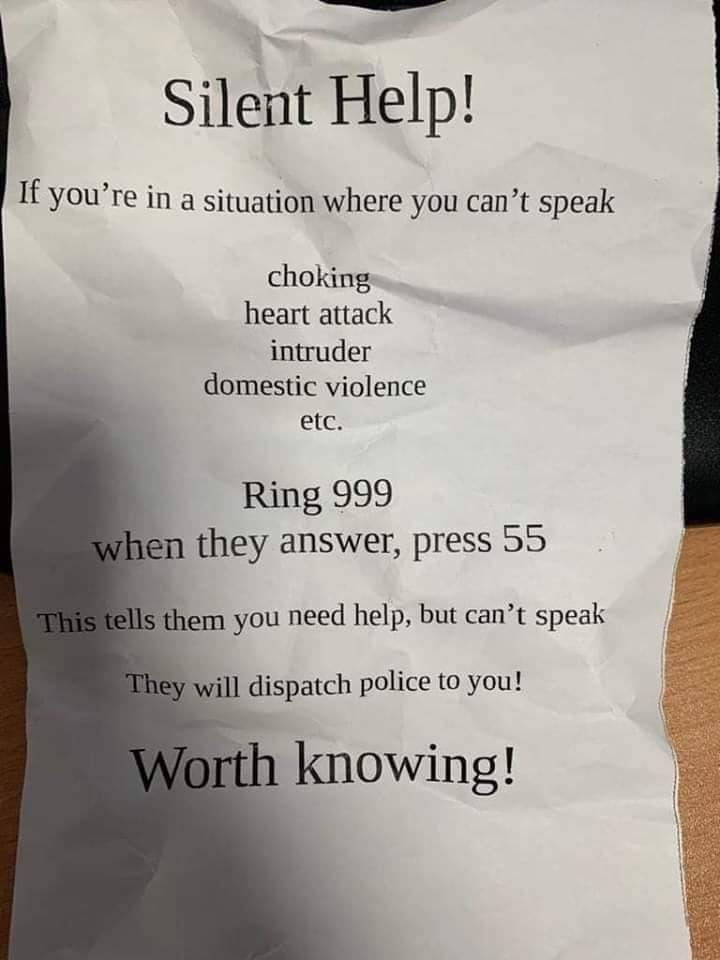 A crumpled printout depicted in the image read:

If you’re in a situation where you can’t speak
choking
heart attack
intruder
domestic violence etc.

This tells them you need help, but can’t speak
They will dispatch police to you!
Worth knowing!

In the advice, scenarios in which a person dialing emergency services via 999 or 911 might be unable to speak were listed as examples — medical events such as choking or a heart attack, or imminent danger of violence, such as domestic abuse or a home intruder. According to the claim, people in either circumstance could be assured help would arrive simply by dialing 55, an action which would trigger the arrival of police.

One minor issue was immediately obvious involving the examples. The first two represented immediate, life-threatening medical events. A person choking or having a heart attack might benefit from law enforcement, but paramedics were more likely an appropriate service to send. Likewise, dispatched police might not be aware of on-scene dangers and unclear on whether they ought to enter cautiously due to a violent individual, or whether the caller was in immediate lethal danger due to a medical event. As described, the “dial 55” advice appeared flawed.

Another issue with the spread of the advice on the internet was its explicit reference to 999 without any region specific. In the UK, 999 is indeed the number for emergency services. But that’s true in several other countries, many of which might not feature the “dial 55” stipulation (if it were true anywhere). Presumably, callers in 999 countries would assume the advice applied to their country:

As it turns out, there is a lot of more detailed information about the “999, dial 55” advice found commonly on the internet. However, that advice is often prefaced by several very important caveats anyone planning to use the advice would need to know.

According to the West Yorkshire Police, the claim has a grain of truth to it, but it’s widely misunderstood — a circumstance that could exacerbate rather than lessen danger:

There is a misconception that the police will always attend if you stay silent after calling 999 – this is not correct.

When you dial 999 anywhere in the UK, your call is answered by telephone operators from BT, who will then direct your call to the most appropriate emergency service.

Each day the 999 service receives large numbers of accidental 999 calls, particularly from mobile phones. BT’s operators will attempt to confirm there is an emergency by asking the normal questions in order to receive a response. If suspicious noises are heard, the call will be put through to the police or the caller will be asked to press/dial 55 which will also route the call to the police.

The BT operator will pass on to the police any information they have been able to establish and the police Customer Contact Centre Agent will then also attempt to assess if there is an emergency and the location of the caller.

IMPORTANT: West Yorkshire Police will NOT automatically have details of the location (particularly for mobile phones) so we can’t automatically send police to your location.

West Yorkshire Police emphasized the final line above, indicating police will not always have location data on 999 calls, a circumstance particularly relevant when it comes to mobile phones. A large share of 999 calls are likely placed from cellular phones, making that information extremely important for anyone exposed to the “999, dial 55” advice. That same police department indicated that operators are aware that not all callers may speak, but inputting touchpad numbers is not the full extent of operators’ efforts to gather information:

West Yorkshire Police’s Customer Contact Centre Agents are very skilled in seeking information from callers who may not be in a position to communicate effectively, so for example tapping the handset in a way that answers the call handler’s questions can be utilised, or skilled use of closed questions (yes or no) enables the call handler to effectively get the most suitable response to the call.

In April 2019, the BBC covered misperceptions about silent 999 calls and the relevance of dialing 55:

The Independent Office for Police Conduct watchdog warns it is “not true” that a silent 999 call alone will automatically bring help.

Callers are then led through a series of prompts and asked to press 55 to confirm there is a genuine emergency.

The system has been in operation since 2002 but police say many callers don’t understand, or use it correctly.

The system, called Silent Solution, filters out thousands of accidental or hoax silent 999 calls made daily – but it also could lead to genuine calls being terminated if the callers do not respond to the prompts.

In that reporting, the outlet referenced a “silent 999 call” which went unanswered, leading to the death of a domestic violence victim:

The Independent Office for Police Conduct’s campaign is being supported by the family of Kerry Power, 36, who was killed by her ex-partner in Plymouth, in December 2013.

She had made a silent 999 call but did not respond to the BT operator and so was transferred to Silent Solution.

As 55 was not pressed, the call was terminated and Devon and Cornwall Police were not notified of Kerry’s call.

In that instance, the victim was informed about the option to make a silent 999 call, but not advised on further steps. Her call was subsequently dropped. An article published at the same time by The Independent carried information possibly more useful to silent 999 callers. Instead of dialing 55, those callers also had the ability to text details of their emergency, allowing for dispatch of appropriate services:

It is possible to text, rather than call, the emergency services.

EmergencySMS is similar to the police’s Silent Solution and allows deaf, hard of hearing and speech-impaired people in the UK send an SMS text message to the UK 999 service where it will be passed on to the police, ambulance, fire rescue or coastguard.

In order to use the service, you must first register your mobile phone number with the emergency services. To do this, text “register” to 999. You will then receive a message confirming that you have been registered with the service.

To text 999 in an emergency, you will need to text which emergency service you require, briefly explain the problem and where the problem is happening.

“Give the name of the road, house number, postcode, or nearby landmark, if possible,” Action on Hearing Loss explains.

Other information from April 2019 issued by the Cambridgeshire Constabulary described the actual purpose of the “999, dial 55” rumors. According to that item, the service existed primarily to prevent silent 999 calls from being automatically disconnected:

When you dial 999 anywhere in the UK your call is answered by telephone operators, who will then direct your call to the most appropriate emergency service.

Most people will be surprised to know just how many accidental 999 calls are answered by operators in the UK every single day. Police operators will try to distinguish if the call is genuine or what is commonly known as a ‘pocket dial’ by answering a series of questions. If there are slight noises such as breathing that lead the operator to think someone is in fact on the other end of the line and cannot talk, the call taker will ask the individual to dial 55 to make it clear they cannot talk.

Dialling 55 will then send the call through to the police, who can try to locate the caller and send out assistance if it is believed the call is an emergency.

A May 2019 piece in The Sun also alluded to the functionality of the “dial 55” part, and how it ought to be understood by any prospective emergency callers:

A police spokesperson told the Express and Echo: “Please do not think that just because you dial 999 that police will attend.

“We totally understand that sometimes people are unable or too afraid to talk, however it must be clear that we will not routinely attend a silent 999 call.

“There must be some indication that the call has not been mis-dialled.”

Police expressed their awareness of callers who are unable to speak or state their emergency, but also indicated that a high volume of “pocket calls” placed by cell phones necessitated additional confirmation. Largely, police emphasized secondary or non-verbal confirmation as confirmation the call was placed intentionally — not as a sole signal of danger. The purpose of dialing 55, coughing, or one-word responses was to validate the call was made deliberately — not to signal distress. Operators were trained to recognize such scenarios, but their ability to deduce those risks appeared situational.

Essentially, a popular January 2020 Facebook post advising users calling 999 to dial 55 for a “silent” call was decontextualized to a point of posing risk to those exposed to the advice. A long-circulating, related rumor that silent 999 calls resulted in police dispatch have had fatal consequences, and in some cases, callers who remain silent might be asked to dial 55 (or cough, or make another affirmative noise) to prevent automatic disconnection of the call. In many cases, dialing 55 would have no effect, or callers would be asked to validate the call in a different fashion.