After a person's death, embalming their corpse is not required by law and the bereaved are allowed to hold funerals inside a home.

Pointed advice in a popular Facebook meme are solid advice for consumers facing the tough decisions that come with the bereavement process, two experts told us.

“People make the mistake of walking into the funeral home and treating the funeral home director almost like he was your minister,” said Joshua Slocum, executive director of the advocacy group the Funeral Consumers Alliance (FCA). 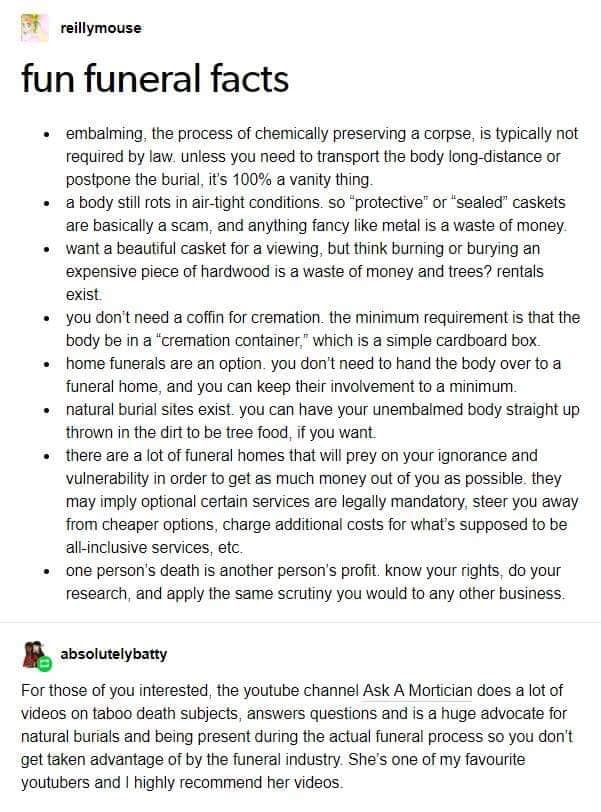 “The meme is great!” said mortician and activist Caitlin Doughty, whose YouTube channel Ask A Mortician is listed as a resource for readers.

It’s a clear distillation of the points myself and my colleagues have been trying to get the public to understand for years. I love it anytime this information can get out there to folks.

While it includes arguments for consumers to know their rights, the post makes some specific claims:

Doughty covered natural burials in a December 2017 video, confirming that they are legal across the United States.

In the video, she explained that natural burials — in which unembalmed corpses are wrapped in a bio-degradable shroud or put inside a casket made of biodegradable material, then buried three or four feet in the ground — can be less harmful toward the ground and water supply around it than a regular cemetery burial.

“The pathogens present in a corpse buried in a shallower natural grave are killed off quickly and efficiently, leaving little to no chance of contamination,” she said. “When a corpse is buried closer to the surface of the Earth in a shroud or bio-degradable casket it has access to oxygen flow.”

The increase in access to oxygen, Doughty explained, allows bacteria to create enough heat as it breaks down the body’s tissues to kill off most, if not all, of the pathogens present in the body at the time of death.

In a separate statement to us, Doughty offered advice for anyone more curious about investigating natural burials.

“Simple as this sounds, your best tool may just be the search term ‘natural’ or “green burial” and then your city,” she said. “‘Green burial Cleveland’ or ‘Natural burial Tacoma.’ That’s a great place to start your research into the different options in your area.”

Doughty also covered home funerals in a July 2018 video in which she explained that those types of services provide the bereaved with both 24-hour access to the deceased and more leeway overall, though there are some requirements attached.

If the deceased passed away at a hospice or nursing home, Doughty said, their loved ones still have the option of taking them home for the purposes of holding a funeral there. If they died while receiving hospice care at the home, a hospice nurse or doctor will report the death. But in the event of an unexpected death, she added, family members must report the event to the authorities before holding any sort of service.

“The police will report the death to the coroner,” Doughty explained. “Don’t go straight into the magical home funeral without notifying the authorities, or it goes from ‘beautiful ritual’ to ‘concealment of a crime.'”

Slocum, who co-wrote a book covering regulations on funeral homes around the US, also vouched for the claims in the meme, noting that several states require embalming, refrigeration, or cremation of the deceased party’s body to be conducted within 48-72 hours or a “reasonable period” following the person’s passing.

According to the FCA:

Embalming is rarely required by law. In fact, the Federal Trade Commission and many state regulators require that funeral directors inform consumers that embalming is not required except in certain special cases. Embalming is mandated when a body crosses state lines from Alabama and Alaska. Five other states—California, Idaho, Kansas, Minnesota and New Jersey—require embalming when the body leaves those states by common carrier (airplane or train).

Slocum also emailed us specific tips for those preparing to deal with funeral arrangements:

By law, Slocum said, funeral homes are required to provide prospective clients with a list of their prices at the beginning of any discussion regarding possible services. But he said that it is not uncommon for practitioners to ignore that mandate.

As the Los Angeles Times reported in October 2015, a series of undercover inspections by the FTC revealed that 27 out of 100 funeral homes across six states failed to list their prices as required.

Unfortunately they don’t always get followed. The only way that Americans can protect themselves from overspending or being talked into a funeral that’s beyond their budget: we have to not be willing victims. You cannot rely on government regulations to protect you from this. You have to be an active customer.

Doughty did note that there are funeral directors who agree with the claims in the meme and promote alternative services to their clients, and she also urged people to shop around before preparing services for the departed.

“Remember: it’s not disrespectful to ask questions, to call around, to see what different funeral homes offer. If it’s too difficult for you right after a death, perhaps ask a trusted friend to do it,” she said. “You can save yourself a lot of money and ensure you’re getting exactly what you’re looking for by doing so.”