A retiring doctor’s act of generosity earned him national media attention and created an online buzz — while also inadvertently underlining gaps in reporting from some of the news organizations telling his story.

Dr. Omar Atiq’s decision to waive outstanding debts for around two hundred of his former patients was covered by ABC’s Good Morning America (GMA) and national news outlets including CBS News and CNN.

However only GMA’s story included a second-party confirmation that Atiq waived around $650,000 in patients’ debt:

Bea Cheesman, president of RMC of America, the billing company that worked with Atiq to forgive his patients’ debts, called his decision a “very kind gesture.”

“Dr. Atiq is a very caring individual and he’s always been extremely easy to work with as a client,” Cheesman told “GMA.” “I think personally that it’s just a wonderful thing that he and his family did in forgiving this debt because the people with oncology bills do have more challenges than the bulk of the population.”

Cheesman further confirmed Atiq’s decision to us via email. We also contacted the University of Arkansas for Medical Sciences — where Atiq is now working as a professor after closing his practice at the Arkansas Cancer Clinic in Pine Bluff — seeking more information.

“I saw patients over the years who just didn’t have anything or who went bankrupt trying to pay for their treatment,” Atiq told GMA. “In many ways it seems like a totally unfair situation.”

CNN included a photograph of one of the cards he sent to patients informing them that their debt had been waived. It read:

I hope this note finds you well. The Arkansas Cancer Clinic was proud to serve you as a patient. Although various health insurances pay most of the bills for majority of patients, even the deductibles and co-pays can be burdensome. Unfortunately, that is the way our health care system currently works. Arkansas Cancer Clinic is closing its practice after over 29 years of dedicated service to the community. The clinic has decided to forego all balances owed to the clinic by its patients. Happy Holidays. 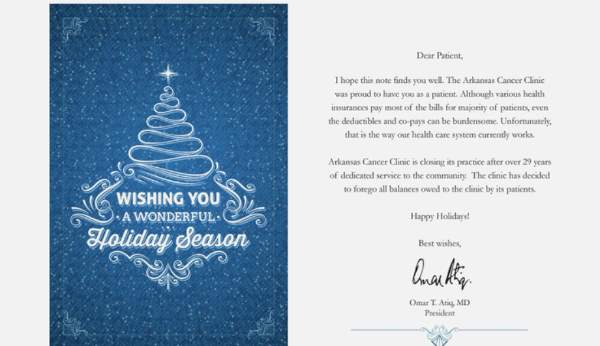 The network also reported that former patients “transitioned to a hospital” to continue receiving treatment.

The Arkansas Democrat Gazette reported that Atiq, who was the first non-white president of the Arkansas Medical Society, contacted the group’s current executive vice president David Wroten for advice before waiving the patients’ debts.

Atiq’s good deed has also been chronicled in a meme posted on Facebook by the “online newsletter” Weird World: 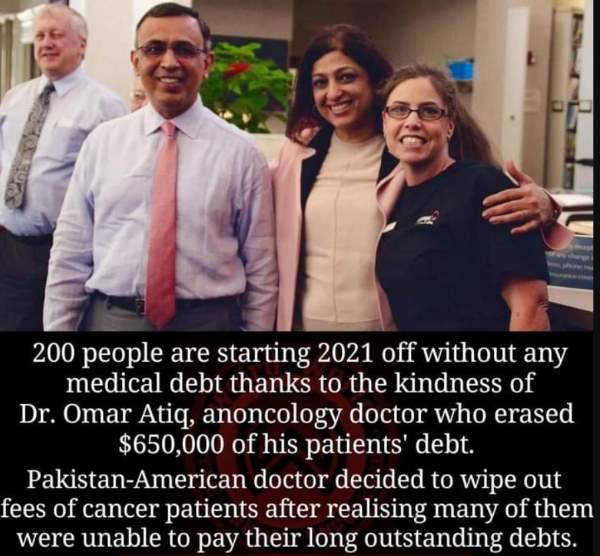 The post has been shared on the platform more than 2,000 times since January 3 2021 and has also amassed more than 62,000 views on the photo-sharing platform Imgur.