"Governor Ron DeSantis has made voting easier in certain Florida counties battered by Hurricane Ian – but only Republican-leaning ones."

On October 18 2022, two posts on Imgur indicated that Florida’s Republican Gov. Ron DeSantis “made voting easier” for counties reeling from Hurricane Ian — with the caveat that the provisions were granted only to “Republican-leaning” areas.

One of the two posts featured a screenshot of what appeared to be a news article, with no date or news organization visible in the image: 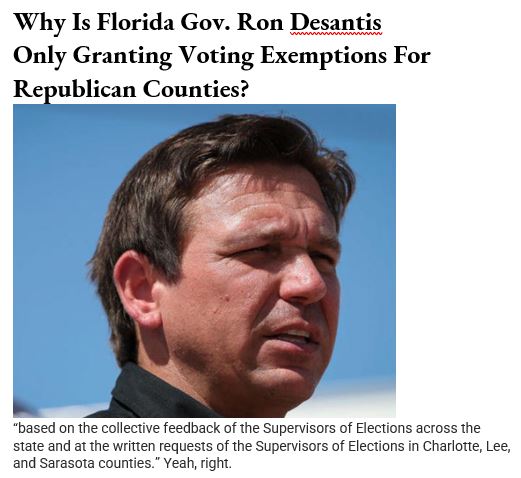 “Governor Ron DeSantis has made voting easier in certain Florida counties battered by Hurricane Ian – but only Republican-leaning ones.” https://t.co/njRg3gCkIH

A Google News search for articles about expanded voting access in Florida after Hurricane Ian initially led to two news articles, one from CNN, and one from NPR. CNN’s reporting did not mention the political skew of areas selected for broader voting access, but acknowledged that DeSantis made no such provision in 2020:

Florida Gov. Ron DeSantis on [October 13 2022] extended early voting in the counties hit hardest by Hurricane Ian as officials in southwest Florida scramble to ready themselves for an election less than a month away [on November 8 2022].

In an executive order, DeSantis allowed Lee, Charlotte and Sarasota counties to set up additional early voting sites and lifted Election Day rules that require people to vote at their assigned precinct. Additionally, residents there can now request the county to send a mail-in ballot to an address different from the one on their voter file.

During the 2020 election, DeSantis declined to make similar voting accommodations due to the pandemic, despite requests from local election officials. In a letter to DeSantis sent in April of that year [2020], the association that represents Florida supervisors of elections asked the Republican governor for flexibility to create additional voting locations and to allow people to vote at any designated polling site through Election Day.

Likewise, NPR’s coverage simply identified the counties selected by DeSantis in his executive order, and did not report any ideological element to the decision:

The governor’s order allows Charlotte, Lee and Sarasota counties to designate additional early voting sites, and then extend those sites through Election Day. These sites mean voters in affected areas will be able to cast ballots at any of these vote centers, as opposed to only being able to vote at their local precinct on Election Day. This allows local officials to have to find fewer locations to open on Election Day.

The Lee County elections supervisor told NPR last week [in October 2022] that dozens of Election Day precinct sites were not up and running.

Per the order, officials are required to publicly inform voters of any changes they make.

The order also allows voters in those counties to request by phone that their mail ballot be mailed to an address that isn’t currently included in their vote-by-mail request. The change is meant to make mail voting easier for people who were displaced from their homes.

We located an October 13 2022 Politico.com article similar to the reporting excerpted above. However, it contained a passing mention of voter registrations in one of the counties:

The three counties covered by DeSantis’s executive order are home to more than 1 million active registered voters, with more than 450,000 of them registered as Republicans. Lee County provided a 62,000-vote margin to DeSantis in the 2018 election when he barely edged Democratic nominee Andrew Gillum.

DeSantis is widely expected to win reelection this year and has led his Democratic opponent, Charlie Crist, in polling and money.

DeSantis’ executive order would allow the election supervisors in those counties to set up so-called super-voting centers instead of trying to maintain polling places for individual precincts. Early voting, which under law is supposed to wrap up the Sunday before Election Day, would be extended all the way to Nov. 8 [2022]. And the executive order would allow supervisors to move drop boxes from previously announced locations.

One of the Imgur screenshots showed a screengrab of an October 17 2022 piece published by The Root via Yahoo News. It was titled “Why Is Florida Gov. Ron Desantis Only Granting Voting Exemptions For Republican Counties?”, and linked to a paywalled Washington Post article (“DeSantis changes voting rules for some counties hit by Ian, sparking criticism.”)

It was published on October 13 2022, and reported that the accommodations were directly contradicted to “[then] recently enacted voting laws pushed by DeSantis and passed by the GOP-led state legislature” limiting voter access to the polls:

More than 1 million voters in Charlotte, Sarasota and Lee counties will have more time to get to the polls for early voting in the upcoming general election and will have more ways to file a mail-in ballot under the order the Republican governor signed Wednesday [October 12 2022].

Noting that “voting rights advocates” had requested accommodations prior to DeSantis’ executive order of October 12 2022, the article referenced several organizations’ request for “an emergency order to make voting easier in all 24 counties considered to be disaster areas” in the wake of Ian in Florida. It continued, providing an example of counties devastated by the hurricane and excluded from the executive order:

Some of what the groups requested — including expanding early-voting days and locations — was included in the order DeSantis signed on Wednesday [October 12 2022], but only for three counties.

More than 450,000 voters in Lee, Charlotte and Sarasota are registered as Republicans, compared with 265,000 Democrats and nearly 290,000 affiliated with no party.

One of the two Imgur posts linked to the tweet embedded above. In the tweet, Uhlfelder linked to The Guardian‘s October 14 2022 article, “Anger as DeSantis eases voting rules in Republican areas hit by hurricane.” It cited the Washington Post and quoted voting rights activist Jasmine Burney-Clark:

Voting rights groups had previously asked the governor to extend the statewide voting registration deadline, which ended on Tuesday [October 11 2022], and to add more early voting days, as well as implement other accommodations.

DeSantis complied – but only for the three Republican counties.

“Tens of thousands of Floridians have been displaced, and [the October 12 2022] executive order fails to meet the moment and ensure voting access for all Florida voters,” said Jasmine Burney-Clark, founder of voter rights organization Equal Ground, in a statement. “Instead, Governor DeSantis is politicizing a natural disaster.”

The Washington Post indicated that while three counties were granted voting accommodations, several more were “considered to be disaster areas.” That assertion was supported by a September 29 2022 article (“President Joe Biden approves major disaster declaration for 9 Florida counties after Hurricane Ian”) from Floridian outlet WPTV:

President Joe Biden has approved a major disaster declaration for nine Florida counties in the aftermath of Hurricane Ian.

A Florida Division of Elections webpage, “Voter Registration – By County and Party,” provided voter registration data for Florida’s counties. Some of the counties that skewed Republican were small (like Hardee, with under 15,000 registered voters in total). The Washington Post mentioned Orange County as an affected “blue” county granted no exceptions; Hillsborough was one of the nine counties above, and it had 342,075 registered Democrats to 288,919 registered Republicans.

On October 18 2022, two separate Imgur posts claimed Florida Gov. Ron DeSantis (R) “made voting easier in certain Florida counties battered by Hurricane Ian – but only Republican-leaning ones.” A Washington Post story noted that hard-hit Orange County was “granted [no] exceptions.” Hillsborough County was one of nine counties included in a “major disaster declaration” on September 29 2022, and was not included in the executive order. Florida state election data indicated that Hillsborough was home to 342,075 registered Democrats and 288,919 registered Republicans, and all three counties in the order — Charlotte, Lee, and Sarasota — were both populous and primarily home to Republican voters.