Despite fears of “deepfake” videos and other high-tech ways disinformation could potentially proliferate in the very near future, the stories that still get the most traction are often decidedly low effort.

Take, for example, the case of a May 2019 story with the provocative headline “Panel of 16 Judges Agrees: Barr Has Enough to Indict Clinton and Obama.” This originated from a satire site (TatersGonnaTate.com), one of many in a network of related pages run by hoax and prank aficionado Christopher Blair that only publish stories with no basis in fact — but which are evidently figurative red meat to a certain subset of the American population:

A panel of 16 judges convened yesterday to process the information available to Attorney General Barr and their conclusion was unanimous: There is plenty of evidence to indict Barack Obama and Hillary Clinton for Conspiracy to Create a False Conspiracy, a 2nd-degree felony with a 10-year mandatory minimum.

The judges all agreed that the initial dossier narrative used to obtain a wiretap of the Trump campaign was most likely bogus and that the conclusions inferred from any evidence gathered from them is, therefore, fruit of the poisonous tree and not admissible in court.

The Trump Administration was quick to issue a statement through Director of Information and Propaganda, Art Tubolls:

“We are as pleased as ever that we are once again shown to have never done anything outside the law — ever. At this point, President Trump is innocent of so many things it will be difficult to justify how he could possibly be guilty of anything.”

It’s a brilliant statement. It makes perfect sense, and it tested very well with the base. Circular logic makes politics much easier for the common American.

This story put more effort to fool people than it needed to, however, since most clearly did not click on the page itself to see the clear “Satire and/or Conservative Fan Fiction” label on the story, right beneath the headline:

Naturally, as FactCheck.org points out, disinformation sites with names like “Conservative Flash” and “Oregon News Press” immediately picked up the “story” and stripped it of its disclaimer. However, the original fooled plenty of people, up to and including a very popular iteration on what appears to be an official Facebook page for Texas Agricultural Commissioner Sid Miller (along with the commentary, “Then let’s get after it!”): 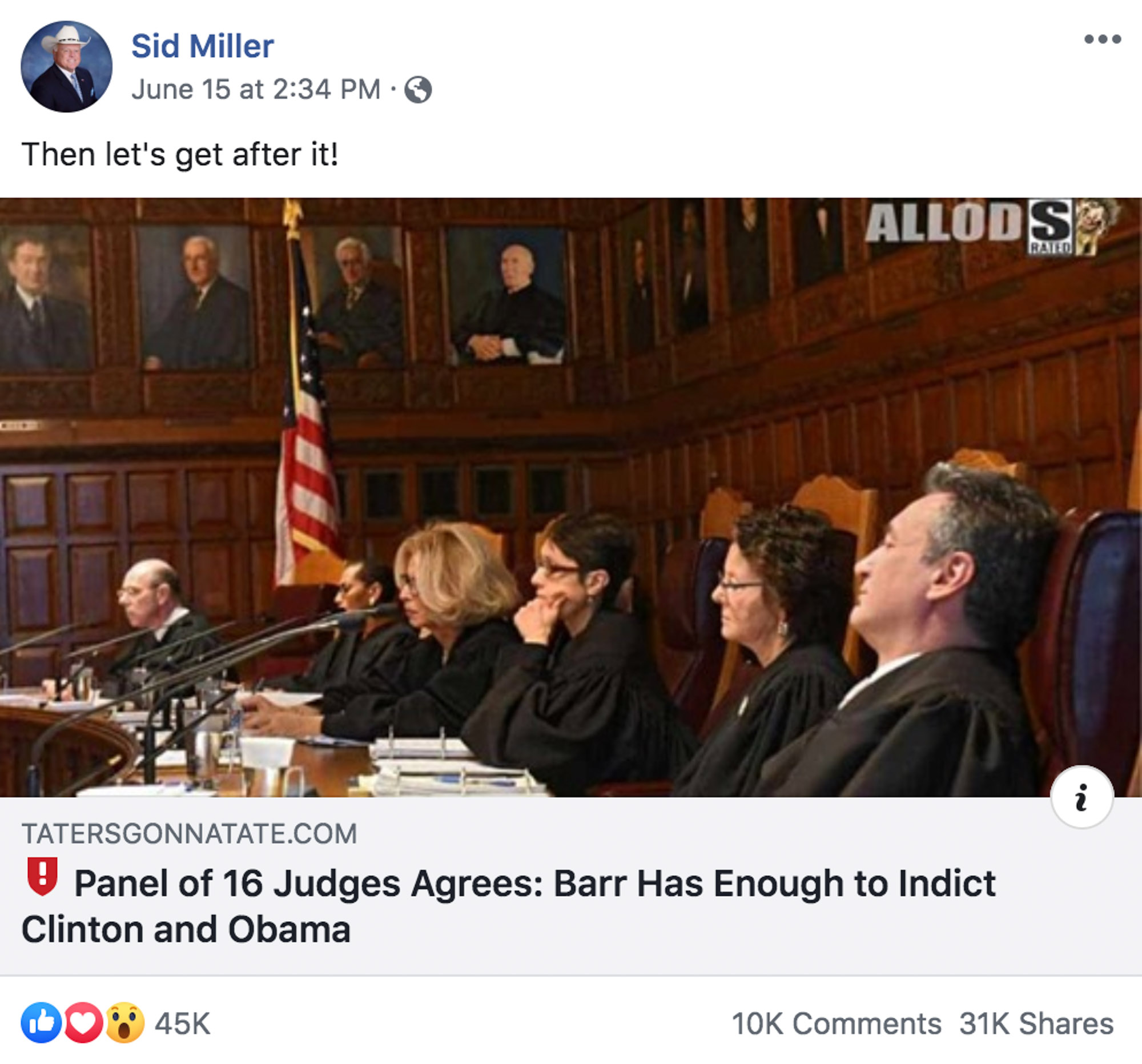 This is not the first time Miller has shared an obviously false but provocative story on social media. The San Antonio Current detailed another instance, this time in late 2017:

On Sunday, Miller posted a story by a Blogger.com website (yes, the same site that hosted your super secret blog diary in 2004) about President Donald Trump removing a federal judge from the “22nd court of criminal appeals” for trying to implement Sharia law in the United States. There is no 22nd court of appeals. This never happened.

It’s a favorite fear among right-wing extremists to believe Muslims are trying to take over the U.S. with Sharia law, a set of guiding Islamic principles. Like scripture from the Bible, Sharia laws are interpreted very differently among Muslims — and extremists have used the laws to promote child marriage, stoning, and domestic violence.

By Tuesday, however, Miller had changed his comment to “Well it looks like I may have been duped. This may be fake news, but I still think Sharia law has no place in the United States of America.”

The story would have been easy to trace back to its origins with a simple web search for a portion of its text, and even readers who somehow missed the label could likely easily find Taters Gonna Tate’s “About Us” page, which makes the site’s aims even more clear:

Everything on this website is fiction. It is not a lie and it is not fake news because it is not real. If you believe that it is real, you should have your head examined. Any similarities between this site’s pure fantasy and actual people, places, and events are purely coincidental and all images should be considered altered and satirical.