More Americans have been killed by guns than have died in all the wars that have occurred since the United States was founded.

On December 7 2018, the Facebook page Change The Ref shared this meme (text below): 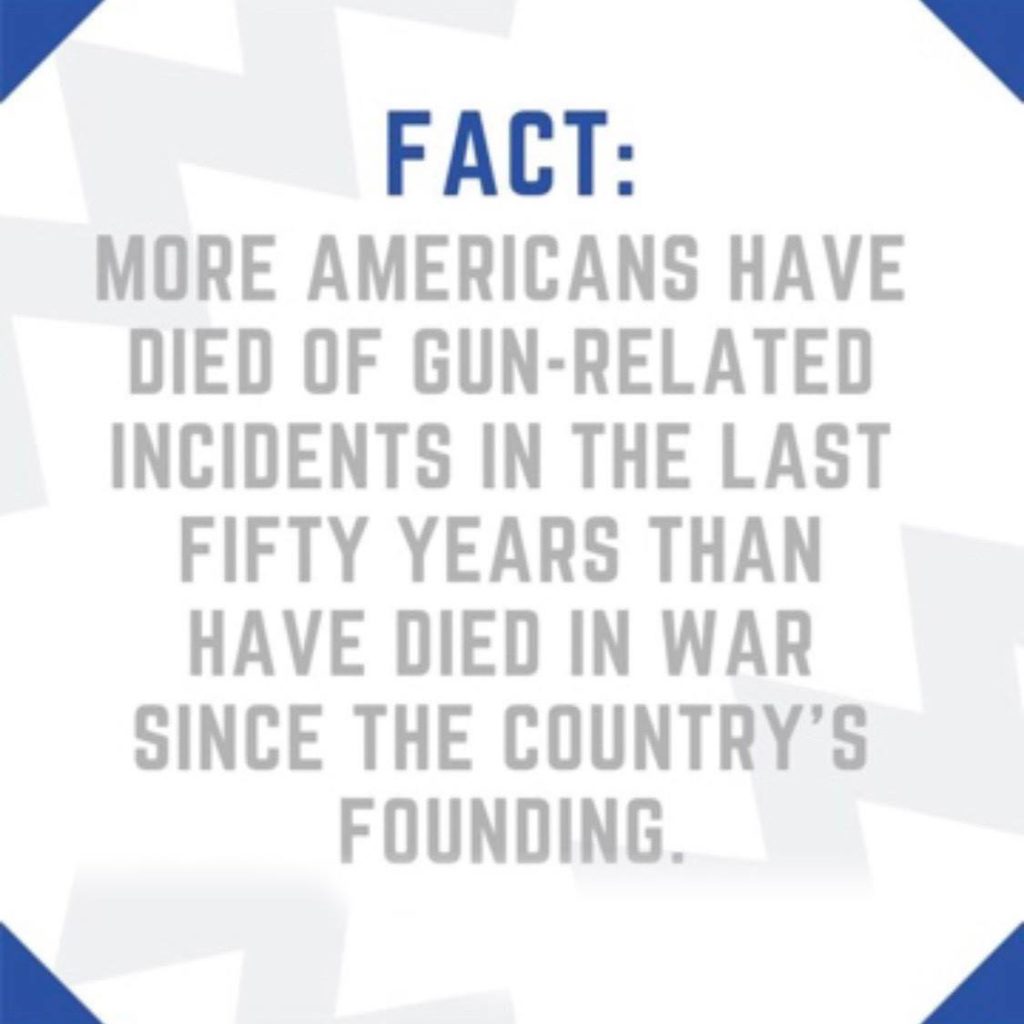 FACT: MORE AMERICANS HAVE DIED OF GUN-RELATED INCIDENTS IN THE LAST FIFTY YEARS THAN HAVE DIED IN WAR SINCE THE COUNTRY’S FOUNDING.

A caption with the image read:

#FckThat Fact of the Day: Did you know that more Americans have died of gun-related incidents in the last Fifty years than have died in war since the country’s founding? smh… #FckThat / If its the last thing we do, CHANGE WILL COME! #changetheref

No links to an article or statistics were provided alongside the meme in its caption, nor did the image feature any such reference.

However, after the Las Vegas mass shooting on October 1 2017, NBC News’ “More Americans Killed by Guns Since 1968 Than in All U.S. Wars — Combined” supplied data from the Department of Veterans’ Affairs and the Centers for Disease Control (CDC):

Since 1968, more than 1.5 million Americans have died in gun-related incidents, according to data from the U.S. Centers for Disease Control and Prevention. By comparison, approximately 1.2 million service members have been killed in every war in U.S. history, according to estimates from the Department of Veterans Affairs and iCasualties.org, a website that maintains an ongoing database of casualties from the wars in Iraq and Afghanistan.

PolitiFact revisited the claim in August 2015, after first tackling it in 2013:

In a column published shortly after the on-air slayings of two TV journalists in southwestern Virginia, the New York Times’ Nicholas Kristof offered some “data points” about the pervasiveness of gun violence in the United States.

One of them was: “More Americans have died from guns in the United States since 1968 than on battlefields of all the wars in American history.”

That sounded familiar. Really familiar. As it turns out, the web version of Kristof’s column sourced a PolitiFact article from Jan. 18, 2013, that fact-checked commentator Mark Shields’ claim that since 1968, “more Americans have died from gunfire than died in … all the wars of this country’s history.” (Shields used the year 1968 because it was the year presidential candidate Robert F. Kennedy was assassinated by gunman Sirhan Sirhan.)

We rated the claim True.

Two and a half years later, we wondered whether the statistic still held up, so we took a new look at the data.

Tables provided by both PolitiFact and NBC News were nearly identical, but with some key differences. NBC included a thousand deaths during “Indian Wars” between 1817 and 1898; PolitiFact did not. NBC included about a quarter of a million fewer deaths for the Civil War than PolitiFact. And NBC News referenced 54,246 and 90,220 deaths in the Korean and Vietnam wars, respectively; PolitiFact provided those numbers as 36,574 and 58,220.

NBC’s most recent count of deaths involving Americans in the Iraq and Afghanistan wars stood at 6,929 as of October 2017. The same source (icasualties.org) included 50 additional deaths as of December 2018 (6,979). In PolitiFact’s 2015 count, that number was 6,857. The overall difference between war statistics in August 2015 and December 2018 was 122 casualties. The higher count of fatalities estimated still stood at about 1.4 million. (PolitiFact noted, “Where possible, we’ve used the broadest definition of ‘death’ — that is, all war-related deaths, not just those that occurred in combat,” likely accounting for the slightly different numbers.) Finally, statistics from the Congressional Research Service update in September 2018 on war deaths are available here [PDF.]

Tallying all deaths from gun-related causes (suicide, homicide, and accidental discharge among them) wasn’t entirely straightforward. Data provided by the CDC didn’t seem to exist in a single set — its search tool’s range extended from 1999-2015 or 2016. The same held for war deaths. Nearly all examinations of the two data sets drew from historical data for early war deaths, and fluid statistics for more recent wars in Iraq and Afghanistan.

Gun deaths from 1968 forward were also a changing number. In 2015, PolitiFact tallied 1,516,863 deaths from firearms between 1968 and 2015, the last year of which was based on estimates. In October 2017, NBC News reported that [s]ince 1968, more than 1.5 million Americans have died in gun-related incidents, according to data from the U.S. Centers for Disease Control and Prevention.” Despite the two-year difference, both worked with the number 1.5 million, derived from CDC statistics. PolitiFact estimated gun deaths in 2014 and 2015 to reach the following figure:

Using the same statistics for deaths in the United States between 1968 and 2018, the most recent numbers were as follows: