This is part of an ongoing series about how communities can fight back and protect themselves against weaponized disinformation.

On September 20 2021, shocking photographs and accompanying video made the rounds on news networks and social media appearing to show border agents on horseback whipping asylum-seekers on foot as they ran in terror:

As the Haitians tried to climb onto the U.S. side of the river Sunday afternoon, the agent shouted: “Let’s go! Get out now! Back to Mexico!”

The agent menacingly swung his reins like a whip, charging his horse toward the men in the river who were trying to return to an encampment under the international bridge in Del Rio after buying food and water in Ciudad Acuña, Mexico.

One migrant fell as he tried to dodge, others shielded their heads with their hands.

After a few minutes the agents retreated, allowing the migrants to return to the camp, where over 10,000 are waiting for the chance to open an asylum claim in the United States.

It took nearly no time at all for the distraction and derailing attempts to begin. The pattern, as with all weaponized narratives, becomes easier to see if you look for the mechanisms behind the topics. The attempt to derail or distract is especially clear those around mass shootings, when aggrieved gun enthusiasts complain en masse that journalists reporting on hideous death and destruction perhaps misreported a minor detail around the gun manufacturer, using the structure of a fact-check in some cases to boot.

In this case, it manifested in a weaponized discussion over one point: whether border agents were abusing asylum-seekers by whipping them with long reins, rather than using actual whips (quickly followed by an announcement by the Biden adminstration that horses patrols would no longer be used at that particular crossing): 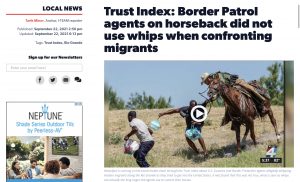 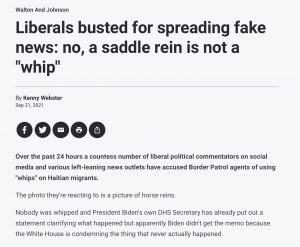 This is a Distraction attempt, and it works, as the name indicates, to distract the public from information that is too big or shocking to conceal. It is a highly effective way to get people who are rightfully enraged over horrors to expend their energies that might be used to bring about lasting change on arguments over details that are either unimportant or completely unrelated.

It is probably one of the least clever and most effective ways to push a narrative — by simply changing the topic of the discussion with emotional pleas, heartrending or frightening imagery, or in its lowest-effort version, focusing on minor details of a story with heavy emotions attached to it. This sucks up time, energy, and space in the discussion, and can re-route the outrage sparked by an event or a report into online quagmires of arguments, with no clear end or resolution, all by design.

While this may seem like an overly simplistic and not very effective way to change a narrative, it is actually easy, cheap, difficult to pin down, and had a lot of utility for disinformation purveyors to take up space that might otherwise be occupied by thoughtful, nuanced discussion — the case even before the technique was further weaponized by social media algorithms and personality targeting.

It is a huge field, possibilities are endless, and disinformation purveyors are reflexive and opportunistic, which makes it impossible to predict what exactly will be used to distract the public. The Center for Media and Democracy’s site Sourcewatch.org mentions several different distraction subgroups for their specific example, which was the disinformation and propaganda around the U.S.-led war in Iraq in 2003: Nationalism, straw man, scapegoat, phenomenon, broadening the issue, marginalization, demonization of the opposition, and “Googlewashing,” a term which we feel can be replaced by simply “firehosing.”

As social scientist Herbert Simon said during a talk he gave on the new information economy all the way back in 1971, human attention has its limits, despite how well we may feel we can multitask; that means that in more information-rich environments, such as the world of 2021, we have to adjust our systems — personal, social, cultural — to accomodate:

Information processing is at the heart of executive activity, indeed at the heart of all social interaction. More and more we are finding occasion to use terms like “information,” “thinking,” “memory,” and “decision making” with twentieth-century scientific precision. The language of the scientific culture occupies more and more of the domain previously reserved to the common culture.

Derailing is a more extreme version intended to jolt the targeted narrative out of the regional or global discussion in order to change the topic or blunt or mute the emotional heft a specific story might carry. It generally requires heavy doses of shocking optics or stories and an engaged media corps.

Derailing can be more difficult to get going, but when it works it can potentially sweep the entire discussion clean of the previous topic. This can sometimes happen organically, such as when there is an unanticipated major disaster or an unexpected mass casualty event, but in a media ecosystem riddled with weaponized disinformation campaigns, it becomes a strategy. (A good recent example of the effectiveness of such a tactic might be the week the entire world’s social media platforms spent talking about Nicki Minaj’s cousin’s friend’s testicles, which culminated in a legitimate international incident in which Trinidad and Tobago’s health minister was forced to publicly deny that any such incident was reported.)

Finally, Distraction has a secondary effect similar to Firehosing, in that it can be used to affect the ability of people to know what is and is not true:

How to Fight Disinformation — Part I: Firehosing

A simple system from  Graphika lead and disinformation specialist Ben Nimmo also touches on the concept of “distraction” as part of what he calls “Disinformation’s Four Ds,” or known techniques employed by botnets or disinformation purveyor trolls:

Dismiss
Dismiss is the first and is by far the most common technique for a threat actor to deploy. The threat actor will say “don’t listen to them because” and then throw out an insult about the source. The attempt is to silence the entity speaking out and insult them to sew distrust in the source.

Distort
Distort is an easy concept to understand. If a person sees that the fact doesn’t suit their preferred story, they will make up their own facts to retell the narrative.

Distract
If a conversation is uncomfortable or unfavorable, then someone can attempt to change the subject. A person can do that by starting a conversation about something else. Another method is to accuse the accuser of being guilty of the same thing. This technique can draw a false comparison between the critic and the one being criticized while also changing the subject.

Dismay
Dismay means to try and scare people off. This technique is often used when there is a policy debate. Using dismaying rhetoric can warn against dire consequences of an action hoping they will not pursue their line of inquiry or achieve a previously stated goal.

Forewarning is the best defense against all of these techniques. As in every aspect of disinformation campaigns, knowing that attacks can take this form is one of the most helpful ways of inoculating against them.

You may want to argue with people being loudly and smugly wrong online. There is a definite utility to such arguments. In the case of a major distraction or derailing attempt, however, remember that the main goal is to exhaust you and that you are not arguing with somebody who is acting in good faith. Instead, refuse to engage with that aspect of the discussion and stay on the actual topic. Remember, the more you type, the information you give social media platforms which they can then use to influence or manipulate your worldview. Parlay the emotions evoked by reports or events into real-world actions — public pressure or protests, for example — instead of online arguments, and stick with people you know to be credible and who have some degree of demonstrated expertise in the subject matter being discussed (particularly when it is a topic as prone to disinformation attacks as border and immigration.)  Spectacle can interfere with memories of events, but spectacle quickly falls away — whereas reality tends to have staying power.