A viral tweet stating "If $15/hr is too much for minimum wage then $85/hr is too much to pay our senators to literally do nothing" showed the House of Lords, not the United States Senate.

A February 23 2021 tweet asserting that “If $15/hr is too much for minimum wage then $85/hr is too much to pay our senators to literally do nothing” immediately spread in viral form, quickly migrating as a screengrab to a popular post on Reddit’s r/WhitePeopleTwitter (and r/antiwork):

$85 an hour to sleep on the job from WhitePeopleTwitter

A search of Facebook indicated that the tweet was popular there too, returning at least 91 shared screenshots: 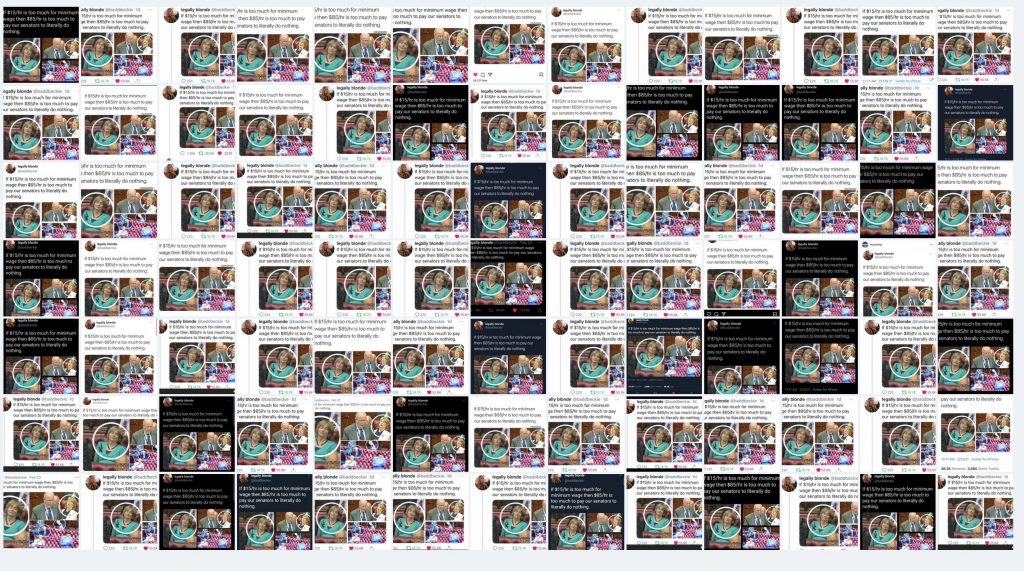 Information visible on the screenshot identified the Twitter user (@baddbeckie), and a date of February 23 2021.

On Archive.is, we located a saved copy of the original (and very popular) tweet, published and then apparently deleted. At the time it was archived, it had been shared more than 21,000 times: 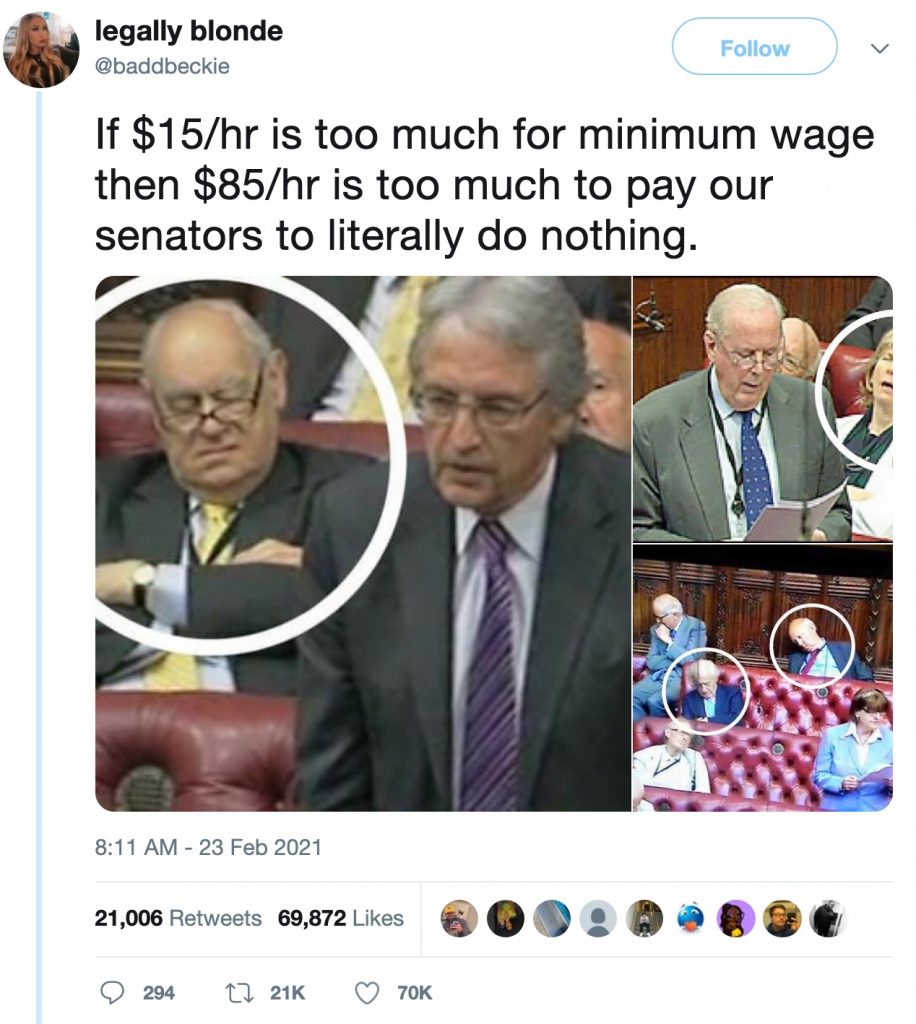 In the comments of the February 25 2021 tweet by @baddbeckie, somebody asked what had happened to the original tweet. In response, @baddbeckie stated that the images in question in the viral tweet were indeed from the UK’s House of Lords:

The amount of people telling me to correct myself when I have, and the fact that people made me feel like I was misleading people because I mistakenly put the UK’s House of Lords.

A reverse image search of one of the images of a sleeping woman returned a March 2008 BBC article about the “sleeping” incident.

@baddbeckie’s viral tweet addressed an ongoing debate about raising the United States’ federal minimum wage from $7.25 in February 2021, where it has languished for many years, to $15.

During the week of February 22 2021, discourse about a $15 minimum wage weaved in and out of the news cycle:

According to a 2018 Congressional Research Service report on Senators’ salaries [PDF]:

The compensation for most Senators, Representatives, Delegates, and the Resident Commissioner from Puerto Rico is $174,000.

The only exceptions include the Speaker of the House (salary of $223,500) and the President pro tempore of the Senate and the majority and minority leaders in the House and Senate (salary of $193,400).

A Senate.gov page disclosing Senate salaries over the years showed that senators retained the annual salary of $174,000, which was raised in 2009 (the same year of the previous minimum wage hike to $7.25 an hour) from $169,300 in 2008 and $165,200 in 2007. Senators were paid annually versus hourly, but a rough calculation using an the typical 40 hour workweek over 52 weeks a year returned the following result:

Although Senators didn’t necessarily do 40-hour workweeks in the standard sense, the calculation of $83.65 was fairly close to the $85 mentioned in the viral, deleted tweet.

A viral February 22 2021 tweet by @baddbeckie asserted that “If $15/hr is too much for minimum wage then $85/hr is too much to pay our senators to literally do nothing”; that user deleted the popular original tweet because the appended images depicted members of the UK’s House of Lords, not United States lawmakers. Screenshots of the tweet continued spreading on Facebook and Reddit, and the tweet fell largely into the realm of opinion. However, the reference to a $15 minimum wage made it newsworthy, and the $85 an hour wage cited was reasonably close to the $83.65 figure we roughly calculated.