if you misspell berniesanders.com as berniesander.com, you get redirected to a donation page for Joe Biden's presidential campaign (the logo for which was obscured for mobile users.)

On March 10 2020, a Twitter user shared a Reddit thread about a purported redirect from “BernieSander.com” (versus “BernieSanders.com”) to a campaign donation page for Joe Biden:

The thread, which was shared on March 9 2020 to r/SandersForPresident, included a brief video screen capture. In it, someone misspells “BernieSanders.com” as “BernieSander.com,” and lands on a page asking for donations to Biden’s campaign:

So if you misspell berniesanders.com as berniesander.com, you get redirected to a donation page for the Biden campaign from SandersForPresident

Not only will it go there, if you do this on mobile it’s setup to jump you lower on the page to the donation section so that you don’t see any of the information at the top

Although it might not be immediately apparent, what the user claimed here is that opening the page on mobile oriented the page so that only the donation field was visible. That means that people intending to donate to Sanders who accidentally typed in “BernieSander.com” might have been accidentally donating to Biden while intending to donate to Sanders, and if the person’s mobile device saved the misspelled “BernieSander.com” instead of the correct “BernieSanders.com,” they could conceivably and inadvertently give multiple donations to the Biden campaign.

To test the claim, we opened “BernieSander.com” on two separate iPhones. Although the “Biden 2020” logo was visible for a split second during load time, the ActBlue page did load as described by the user, obscuring the campaign logo at the top of all ActBlue donations pages. Text above the dollar amounts did say, “Your contribution will benefit Joe Biden” — but the page was markedly different on mobile versus desktop: 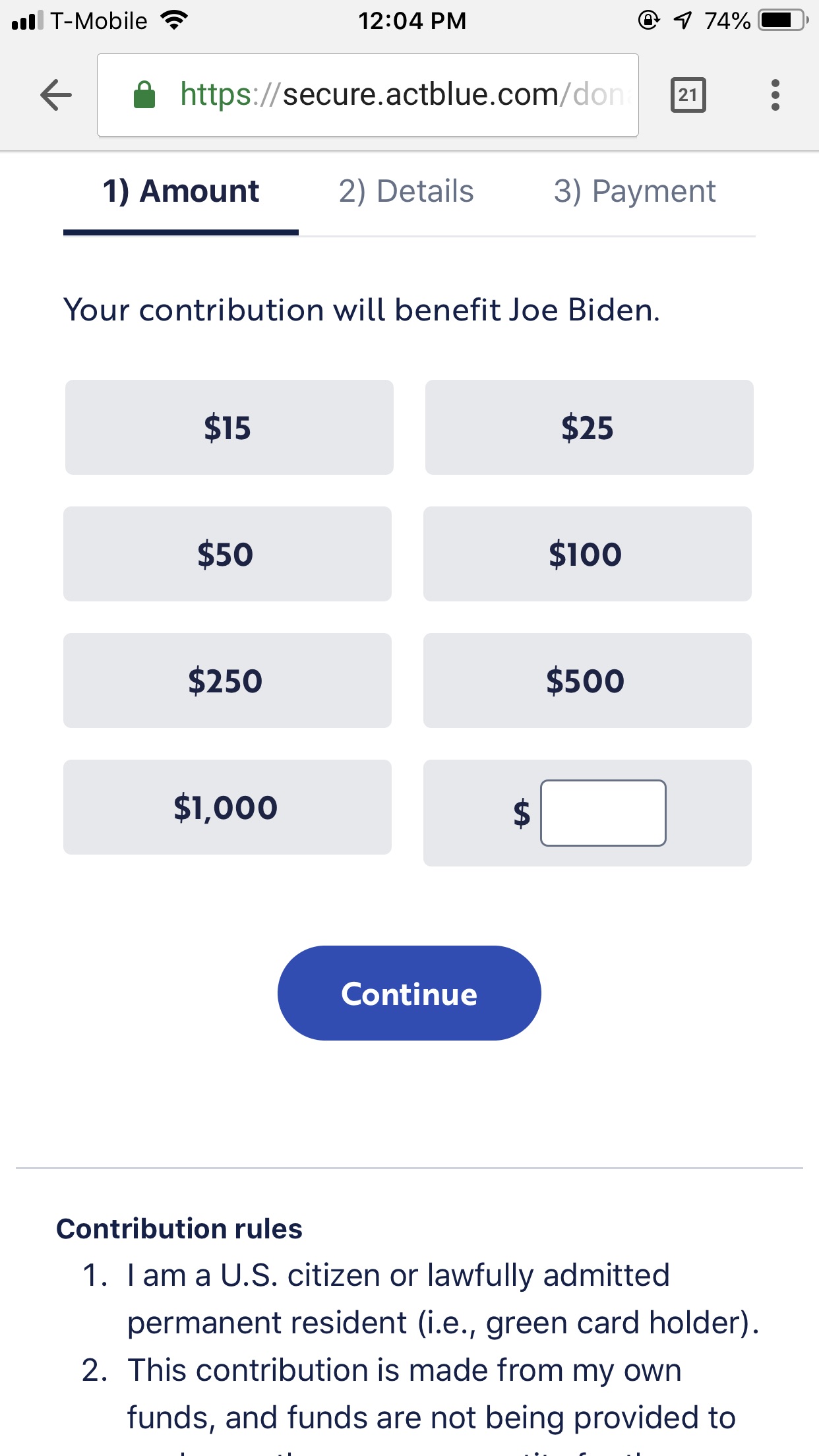 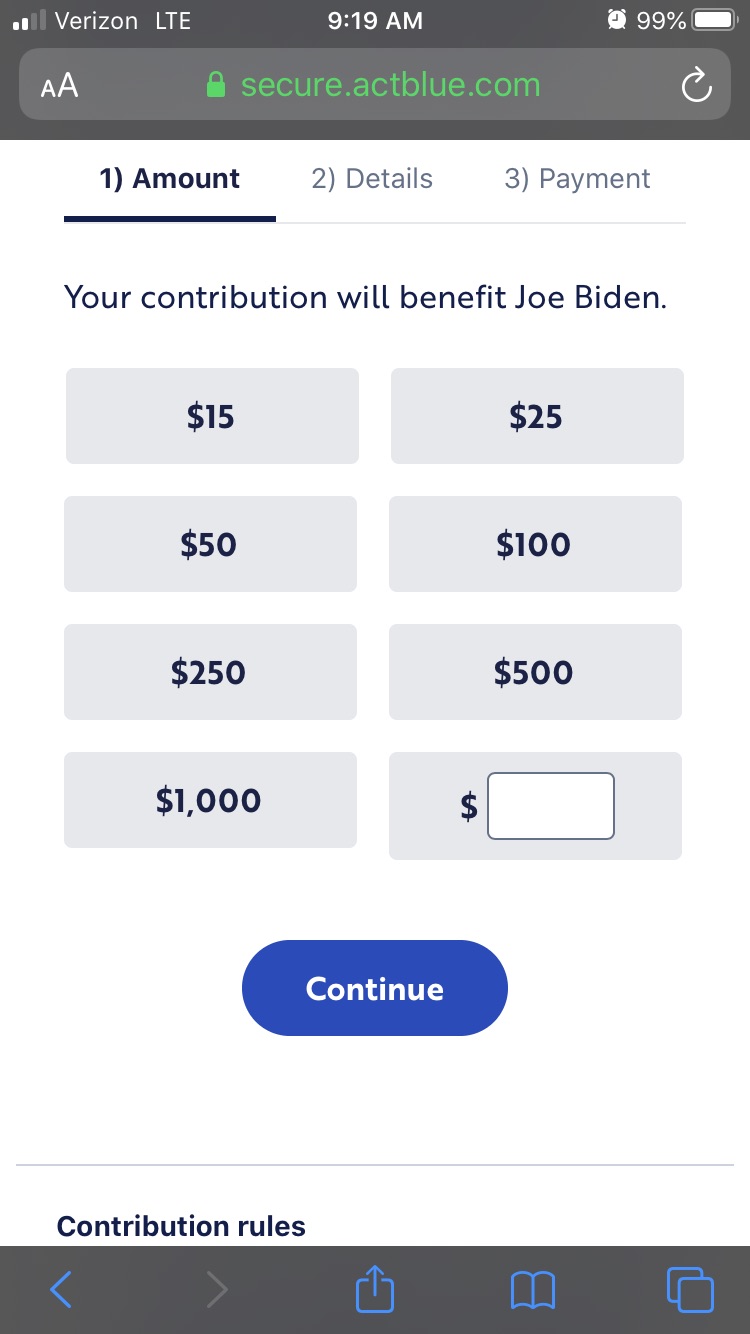 Another user described the tactic as “typosquatting,” a form of domain squatting specific to mistyped addresses:

Typo-squatting is an unfortunate reality many large organizations deal with on a daily basis. One thing we can do is report this domain as ‘suspicious’ at places like Symantec Bluecoat (https://sitereview.bluecoat.com/#/). There are many organizations that uses services like bluecoat for content filtering who block domains categorized as ‘suspicious’ outright. The turn around time can be pretty quick on these.

Yet another commenter noted that anyone could have created the page — which is true — adding that the original poster might even have done so in an “inside job” to reap karma on Reddit:

No proof that Biden’s campaign did it, anyone of you could have. Could have been OP for all we know. Seriously it’s not hard to do this type of thing, anyone with the money (and the domain name) could do this.

We looked up the domain registration, which was anonymous; BernieSander.com was registered in 2015, and the domain changed on February 24 2020: 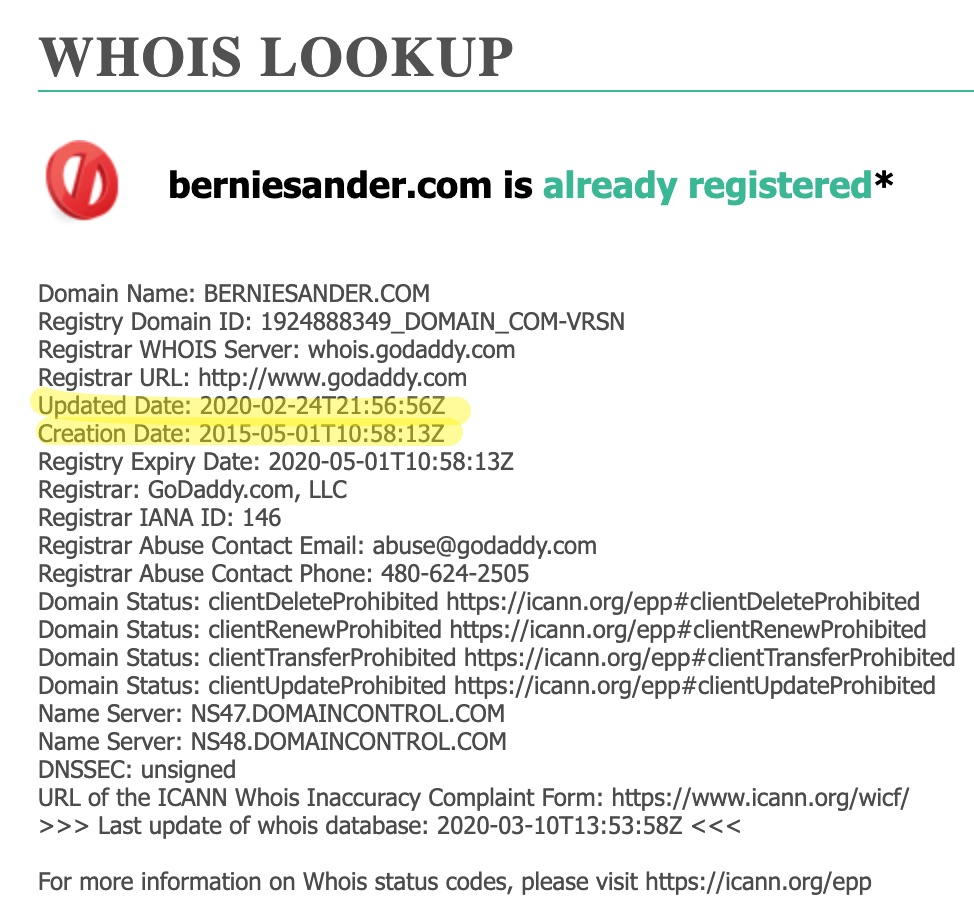 As far as the original poster’s possible involvement, the same person appeared to be chagrined when others suggested registering Biden-related domains for Sanders:

“Hey how about we don’t pull the same asshole move? We should be above that”

“If we have to resort to unethical means to secure the nomination then we are just as morally compromised as they are.

“Bernie has always run a clean campaign, and we should strive to follow that example”

It is definitely true that people misspelling Bernie Sanders’s name to open BernieSander.com were directed to a donation page for Joe Biden’s campaign as of March 10 2020, and that domain was anonymously registered. It is additionally true that users on mobile devices (arguably likelier to misspell URLs) viewed a version of the page that did not immediately show Joe Biden’s campaign logo. However, we are not certain of who may have created the page or how successful this effort has been. We contacted ActBlue to ask for more details and whether it was possible to find out how much had been donated through the redirect, but we have not yet received a response.