On April 14 2021, Imgur user ButtBot9900 shared a screenshot of a tweet by an account called @LAPDParody, which claimed there were only “18 days in 2020” where American police officers “didn’t kill anyone at all.”

No date was visible on the tweet, and ButtBot9900 sarcastically titled it “Wow 18 whole days out of 365.”

The tweet was real, and it was originally tweeted on April 12 2021 (one day after an officer in Brooklyn Center, Minnesota shot and killed 20-year-old Daunte Wright; she has been charged with second-degree manslaughter):

The media always focuses on when police kill. But there are plenty of days when we don’t. For example in 2020 there were 18 days when police officers didn’t kill anyone at all.

In full, it read:

The media always focuses on when police kill. But there are plenty of days when we don’t. For example in 2020 there were 18 days when police officers didn’t kill anyone at all.

Originating with the account “Los Angeles Police Department Parody” (@LAPDParody), the tweet was clearly using satire to make its point. However, no citation for the claim was included on either the original Twitter thread nor the Imgur iteration.

On Imgur, u/Ngugi commented suggesting the claim might be hyperbole, despite (or perhaps because of) its odd specificity:

It is a parody account, just for the record.

The amount of people not realizing this is a parody account despite parody being clearly in the name is why the world is fucked.

Commenters frequently seemed to infer (based on the nature of the account) that the statistic was in fact fabricated:

Source of this is made up.

On the “parody” comment, ten people replied — one of whom, u/bobismeisbob, provided a possible source for the claim:

The stat is true (just below the big map)

That user linked to a source for the claim, visible on the landing page for MappingPoliceViolence.org: 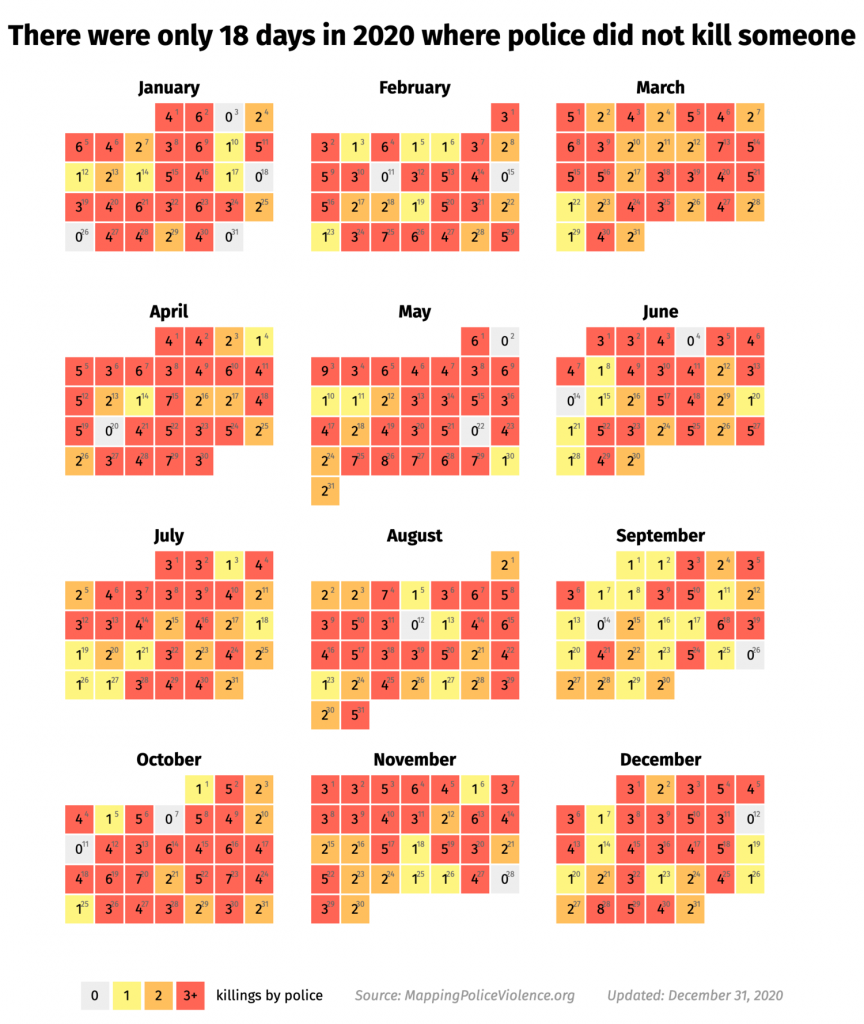 MappingPoliceViolence.org indicated that their data was updated on December 31 2020. On a separate page, “About The Data,” the site’s operators explained the project and indicated their belief that it captured approximately 92 percent of incidents since 2013 in which a police officer killed somebody:

Law enforcement agencies across the country have failed to provide us with even basic information about the lives they have taken. And while the Deaths in Custody Reporting Act mandates this data be reported, its unclear whether police departments will actually comply with this mandate and, even if they do decide to report this information, it could be several years before the data is fully collected, compiled and made public.

We cannot wait to know the true scale of police violence against our communities. In a country where at least three people are killed by police every day, we cannot wait for police departments to provide us with these answers. The maps and charts on this site aim to provide us with some insights into patterns of police violence across the country. They include information on over 8,000 killings by police nationwide since 2013. 97 percent of the killings in our database occurred while a police officer was acting in a law enforcement capacity. Importantly, these data do not include killings by vigilantes or security guards who are not off-duty police officers.

This information has been meticulously sourced from the three largest, most comprehensive and impartial crowdsourced databases on police killings in the country: FatalEncounters.org, the U.S. Police Shootings Database and KilledbyPolice.net. We’ve also done extensive original research to further improve the quality and completeness of the data; searching social media, obituaries, criminal records databases, police reports and other sources to identify the race of 90 percent of all victims in the database.

We believe the data represented on this site is the most comprehensive accounting of people killed by police since 2013. Note that the Mapping Police Violence database is more comprehensive than the Washington Post police shootings database: while WaPo only tracks cases where people are fatally shot by on-duty police officers, our database includes additional incidents such as cases where police kill someone through use of a chokehold, baton, taser or other means as well as cases such as killings by off-duty police. A recent report from the Bureau of Justice Statistics estimated approximately 1,200 people were killed by police between June, 2015 and May, 2016. Our database identified 1,104 people killed by police over this time period. While there are undoubtedly police killings that are not included in our database (namely, those that go unreported by the media), these estimates suggest that our database captures 92% of the total number of police killings that have occurred since 2013. We hope these data will be used to provide greater transparency and accountability for police departments as part of the ongoing campaign to end police violence in our communities.

MediaBiasFactCheck.org, a resource for evaluating the reliability and possible biases of a number of data sources and outlets, did not maintain an entry for MappingPoliceViolence.org. However, the site was listed on their “Sources Pending” page, and a preliminary classification for any listed website:

MappingPoliceViolence was coded as a “9,” indicating that it did not fall into the “Questionable (fake, extreme bias)” category, nor did it rate a “1” for “Conspiracy.” Beyond that, the site did not yet have a rating.

Further, MappingPoliceViolence.org was used as a citation in published research, such as an April 2019 study in the American Journal of Public Health (AJPH), titled “Validating the National Violent Death Reporting System as a Source of Data on Fatal Shootings of Civilians by Law Enforcement Officers,” and a November 2015 analysis in the journal PLoS One.

In January 2020, Atheendar Venkataramani (@atheendar) tweeted about having used the site as a citation for a paper published in medical journal The Lancet. Venkataramani once again referenced the source of the data:

A few weeks ago, Nix & Lozada posted a @SocArXiv paper critiquing our @TheLancet paper on police killings (using Mapping Police Violence data by @samswey et al.). We stand by our empirical strategy and our substantive findings. Here is our response. https://t.co/yWk8tJSO0G

A few weeks prior, Sinyangwe addressed the same criticism mentioned by Venkataramani on Twitter, in a post to Medium.com, saying in part:

As [the rebuttal] paper asserts, cases involving police violence — and the information made publicly available about the circumstances behind them — are not always clear-cut to code or evaluate. This is true for us and for anyone doing this work — including for other groups that compile similar data, such as the Washington Post’s Fatal Force project. The goal of Mapping Police Violence database is to understand killings by police in every form that they take. While 9 in every 10 incidents in our database are fatal police shootings, the remainder of cases reflect situations that involve other types of police use of force and police pursuits that are often more complicated to evaluate. Moreover, there is no universal definition of what constitutes “unarmed” in the context of an incident of police violence. For example, if someone is holding a spoon are they unarmed? What about a fork or screwdriver? How do you factor in the way they’re using the object at the time? This is why we have always articulated clearly our methodology on our site, reflecting how we’ve managed the complexity of coding these incidents. After re-examining the 93 cases they cite as “misclassified” in their paper, we believe the vast majority of these cases to be properly coded as unarmed while the remaining cases reflect ambiguities inherent to performing analyses of often incomplete and conflicting police data.

MappingPoliceViolence has also been cited by data analysis site FiveThirtyEight.com in a piece titled “The Government Finally Has A Realistic Estimate Of Killings By Police.” A June 2020 fact-check from PolitiFact.com asserted:

The Centers for Disease Control and Prevention and FBI keep tabs on deaths resulting from interactions with police, but both sources provide incomplete data that takes years to record.

More reliable data comes from the Washington Post and projects such as Mapping Police Violence and Fatal Encounters.

Those numbers are higher than the Washington Post’s in part because Mapping Police Violence tracks police killings more broadly and includes officers who are off duty.

In 2019, among those who were unarmed when they encountered police, there were five black people and 12 white people who died from tasers, beatings or other uses of force by police, according to Mapping Police Violence’s data. Off-duty officers killed four unarmed blacks and five unarmed whites. Those deaths won’t show up in the Washington Post data.

Another reason Mapping Police Violence counted more unarmed people killed by police is that it considered victims in possession of toy guns, BB guns, airsoft guns or rocks to be unarmed. The Washington Post’s database doesn’t include those people in its unarmed tallies.

In 2019, at least eight black people and 16 white people were killed by police while in possession of a toy weapon or something similar, according to Mapping Police Violence.

MappingPoliceViolence.com was also cited in the first sentence for Wikipedia’s “Police use of deadly force in the United States” entry.

Ultimately, the site has been cited by at least three peer-reviewed journal articles or papers. Fact-checkers also use their data while determining the veracity of claims about officer-involved deaths, and frequently, MappingPoliceViolence.org was described as more comprehensive due to their inclusion of broad circumstances, such as off-duty killings.

The Imgur post and original @LAPDParody tweet (often dismissed as solely satire) claimed that “in 2020 there were 18 days when police officers didn’t kill anyone at all.” That claim was derived from MappingPoliceViolence.org, a data source used in the course of serious inquiry and academic research.