A September 28 2021 Imgur post (below) purportedly contrasted the state of Alabama with the Republic of Ireland in “Covid stats”; it appeared to be a screenshot of a post to r/Ireland from the same day:

With the exception of the Reddit post’s last line (“… get the vaccine,”) both posts were identical. Eight bullet points contained four separate statistics:

Imagine what it would be with no vaccine. Anybody who is still holding out – get the vaccine.

According to the list, Ireland and Alabama had similar populations as of 2019, at 4.9 million people each. But Ireland’s vaccination rate was provided as 90 percent, far higher than Alabama’s 51.8 percent. Ireland’s seven-day average for COVID-19 deaths was said to be four to Alabama’s 119, and Ireland’s number of ICU patients was listed as 65 to Alabama’s purported 660.

Real-time statistics around pandemic-related issues, such as rates of vaccination, are often difficult to pin down. Reuters’ live pandemic statistics tracker for Ireland read as of September 29 2021:

Ireland has administered at least 7,207,797 doses of COVID vaccines so far. Assuming every person needs 2 doses, that’s enough to have vaccinated about 72.9% of the country’s population.

However, a September 22 2021 Irish Times article (“Covid-19 Vaccine Tracker: How many people have been inoculated in Ireland?”) reported:

Over 80 per cent of people in Ireland aged over 18 are now fully vaccinated, with over 90 per cent in receipt of at least one dose.

The Reddit post said that 51.8 percent of adults in Alabama were vaccinated as of late September 2021. A September 24 2021 WVTM editorial stated:

While we do now have 41.4% of our population fully vaccinated compared to 30% at the start of the summer, we remain well below the threshold needed to control the pandemic.

Ireland’s “fully vaccinated” figure (72.9 percent) differed from its “at least one dose” figure (over 90 percent). We located a dashboard for Alabama’s vaccination rates, but it did not have a percentage listed; 2,442,638 Alabama residents received at least one dose of a vaccine.

BIRMINGHAM, Ala. (WBRC) – A little more than half of Alabama’s total population now has at least one dose of a COVID-19 vaccine.

According to the CDC, 50.8 percent of the state’s population is now at least partially vaccinated.

According to the post, Ireland’s seven-day average death rate was four to Alabama’s 116.

Google’s pandemic dashboard provided the exact same figure for Alabama, 116, on September 29 2021 (citing the New York Times, where the figure was listed as 99). It is possible that the rate, which was averaged, was accurate at the time the post was shared: 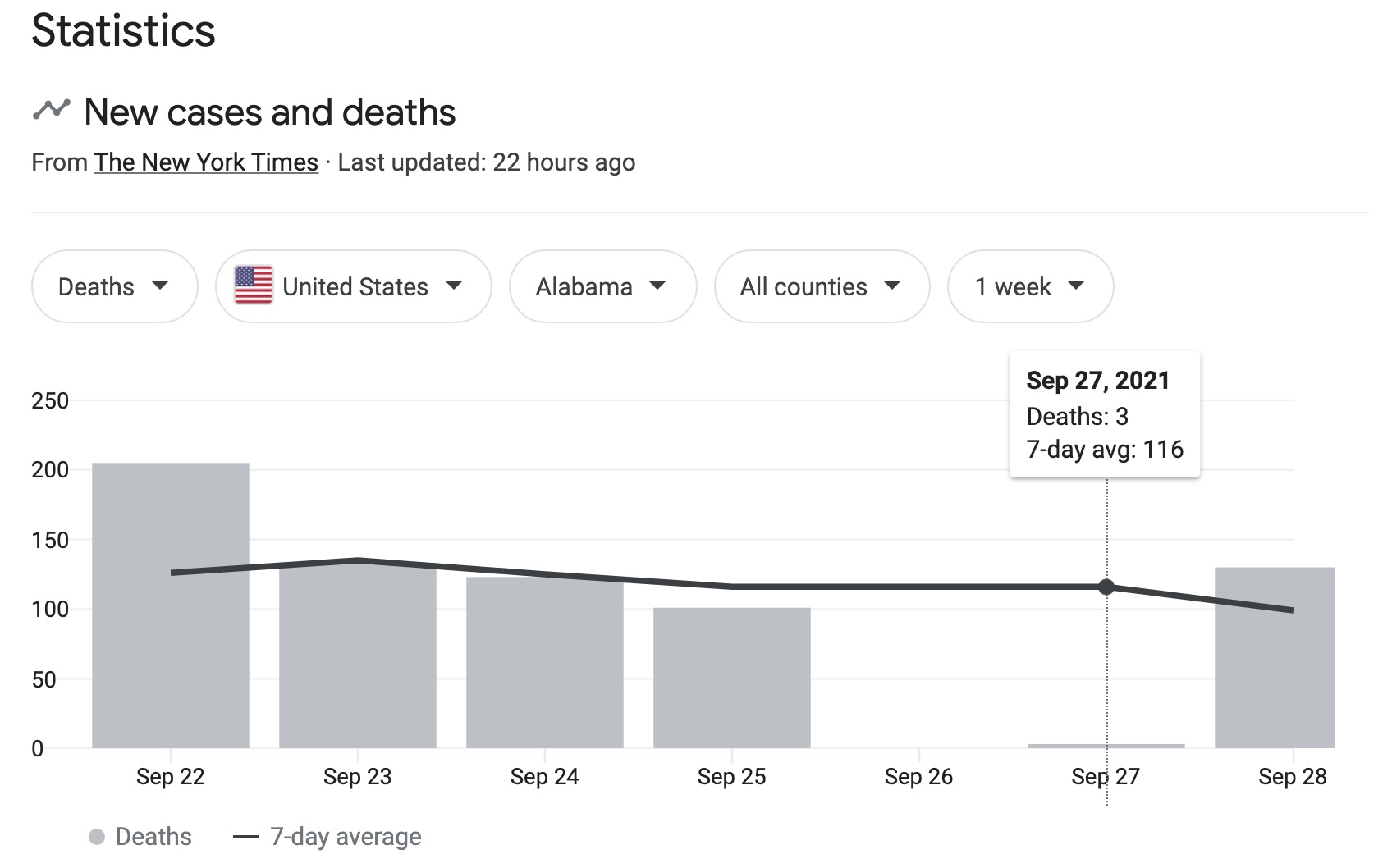 Google’s dashboard listed “four” as the figure as on September 29 2021: 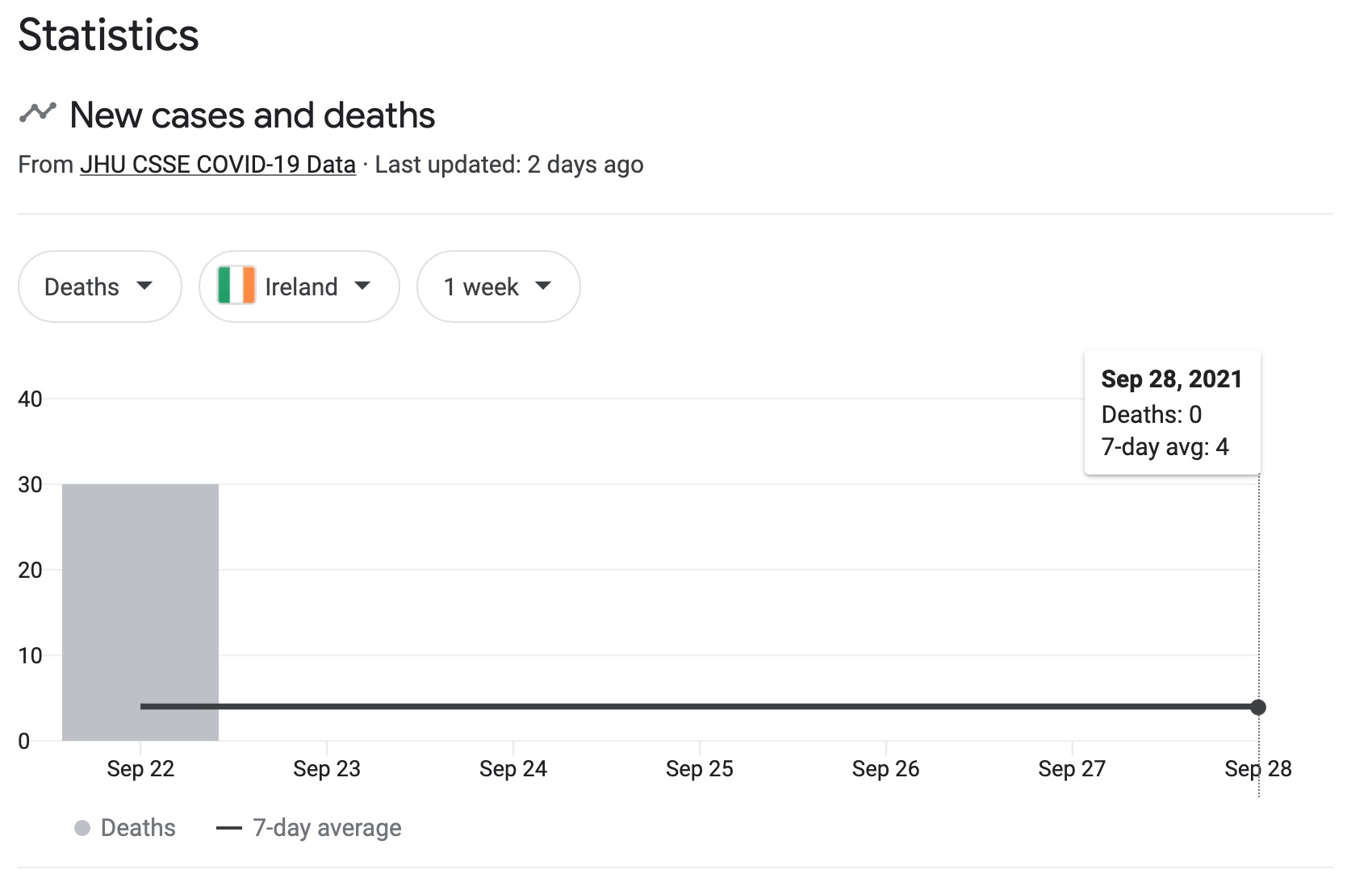 Broadly, the seven-day mortality rate was accurate when fluctuations were considered.

A fourth and final statistic was a bit trickier to pin down — the number of patients in intensive care units (ICUs) in late September 2021. Purportedly there were 65 in Ireland and 660 in Alabama.

After some digging, we located a dashboard from the Irish government listing COVID-19-related hospitalizations and ICU admissions. As of September 29 2021, the dashboard indicated:

That particular figure (60) was close to the 65 cited in the post, and could have differed due to admissions changes between when the post was shared and when the dashboard was updated. Similarly, a University of Washington state-by-state dashboard indicated a range of ICU beds “needed” in Alabama.

On September 29 2021, the number of ICU beds dipped to 573 from 703.5 one week earlier, with an average of just under 640. Without an exact source for the figure, it was difficult to verify it precisely. 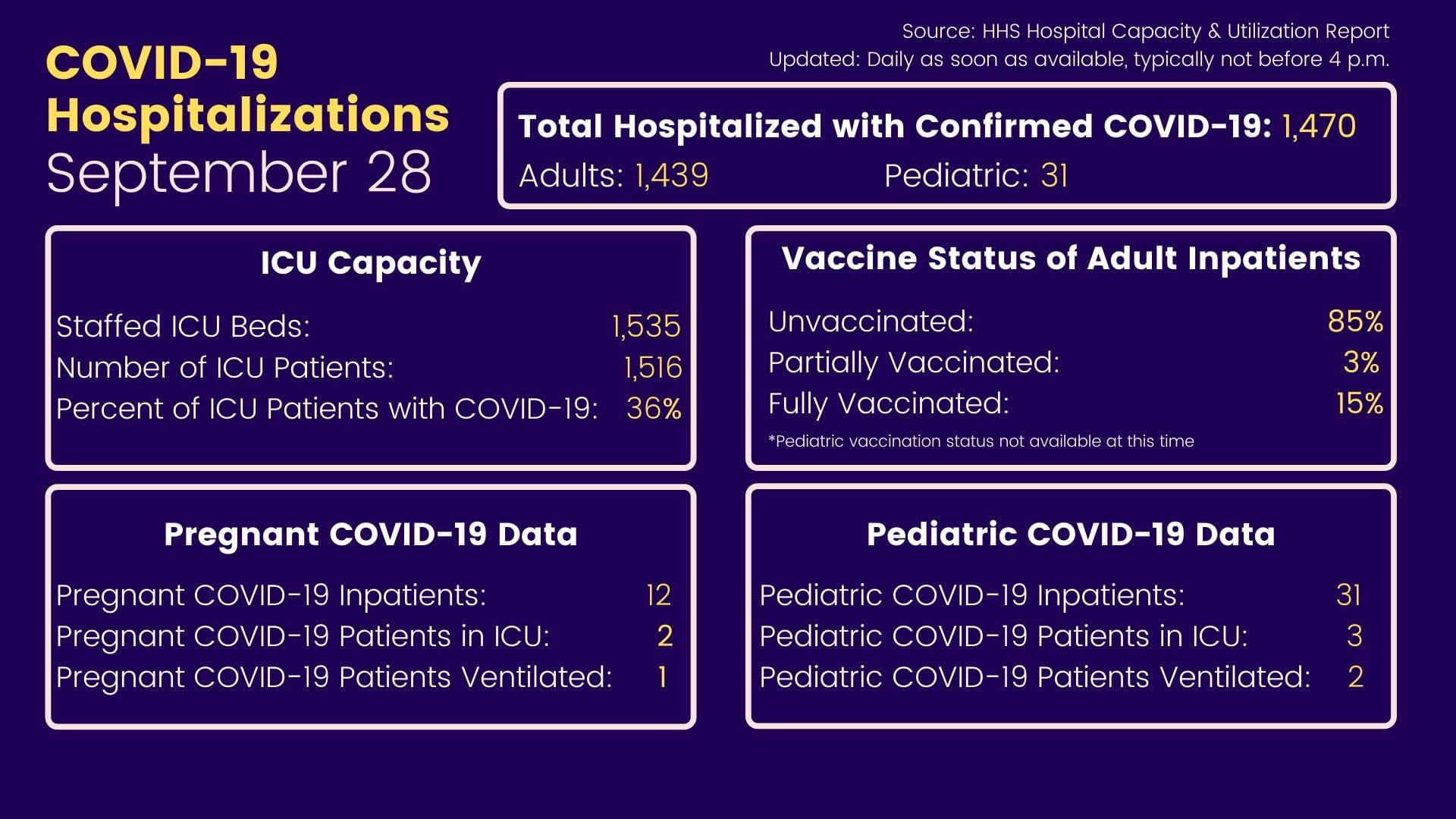 A Reddit post contrasting “Ireland Covid stats versus… Alabama” was largely accurate — but the original poster did not provide sources for the data, nor did they provide a range of dates for when the figures might be accurate. The figures we located typically aligned with the numbers in the post, with the final figure (COVID-19 patients in ICUs) the most difficult to validate.