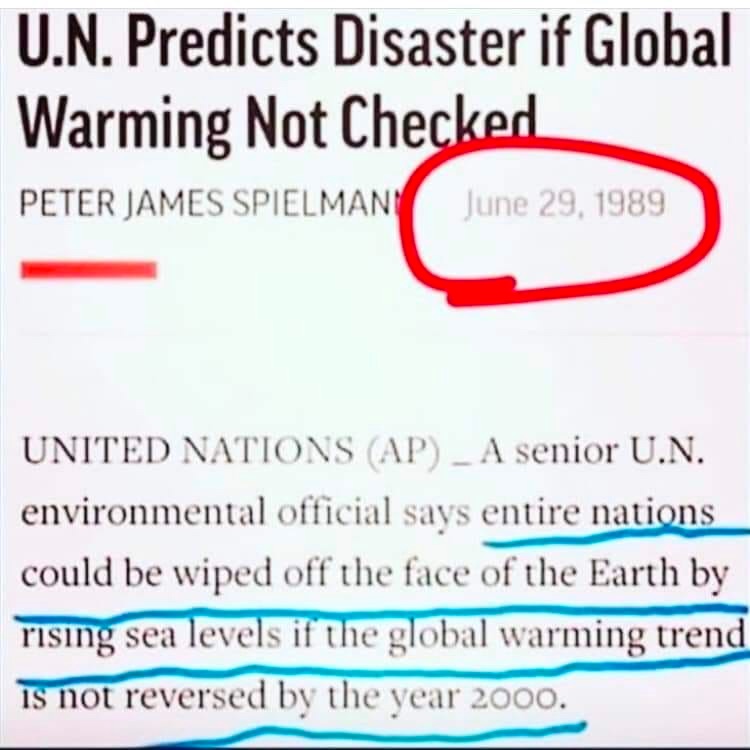 In the screenshot, text from an unlinked Associated Press article’s headline and first sentence was visible (with indicated emphasis), reading:

UNITED NATIONS (AP) _ A senior U.N. environmental official says entire nations could be wiped off the face of the Earth by rising sea levels if the global warming trend is not reversed by the year 2000.

The screenshot is authentic. It was captured from a June 29, 1989 article by Peter James Spielmann. As the excerpt showed, the headline referenced a United Nations prediction, and the first sentence attributed the prediction to a UN official, continuing:

Coastal flooding and crop failures would create an exodus of “eco-refugees,” threatening political chaos, said Noel Brown, director of the New York office of the U.N. Environment Program, or UNEP.

He said governments have a 10-year window of opportunity to solve the greenhouse effect before it goes beyond human control.

As the warming melts polar icecaps, ocean levels will rise by up to three feet, enough to cover the Maldives and other flat island nations, Brown told The Associated Press in an interview [in June 1989].

The most conservative scientific estimate that the Earth’s temperature will rise 1 to 7 degrees in the next 30 years, said Brown.

The difference may seem slight, he said, but the planet is only 9 degrees warmer now than during the 8,000-year Ice Age that ended 10,000 years ago.

Although the screenshot was authentic and unaltered, the implication of emphasis on the date and timeframes described was done so in a way that readers might infer Brown’s predictions did not come to pass. In 1989, the portion excerpted above described a thirty-year period, which concluded in 2019.

But a June 2018 piece in The Guardian marked a slightly different thirty-year prediction, one that came just before the 1989 Associated Press report:

Thirty years after a former Nasa scientist sounded the alarm for the general public about climate change and human activity, the expert issued a fresh warning that the world is failing “miserably” to deal with the worsening dangers … [Former NASA climate scientist James] Hansen provided what’s considered the first warning to a mass audience about global warming when, in 1988, he told a US congressional hearing he could declare “with 99% confidence” that a recent sharp rise in temperatures was a result of human activity.

Since this time, the world’s greenhouse gas emissions have mushroomed despite repeated, increasingly frantic warnings about civilization-shaking catastrophe, from scientists amassing reams of evidence in Hansen’s wake.

Hansen’s frustrations temper any satisfaction at largely being vindicated for his testimony, delivered to lawmakers on 23 June 1988.

Wearing a cream-coloured suit, the soft-spoken son of Iowan tenant farmers hunched over the microphone in Washington to explain that humans had entered a confronting new era. “The greenhouse effect has been detected and it is changing our climate now,” he said.

Afterwards, Hansen told reporters: “It is time to stop waffling so much and say that the evidence is pretty strong that the greenhouse effect is here.” He brandished new research that forecast that 1988 was set to be the warmest year on record, as well as projections for future heat under three different emissions scenarios. The world has dutifully followed Hansen’s “scenario B” — we are “smack on it”, Hansen said last week — with global temperatures jumping by around 1C (1.8F) over the past century.

In the original AP article, the paper said that as of 1989, the “most conservative scientific estimate that the Earth’s temperature will rise 1 to 7 degrees in the next 30 years.” In 2018, Hansen said temperatures had elevated by about one degree in the past century.

On the subject of the measurable effects of climate change, Axios also examined the period between Hansen’s testimony and 2018:

Three decades have passed since then-NASA scientist James Hansen testified before the Senate Energy committee and alerted the country to the arrival of global warming [in 1988].

Why it matters: The predictions of the world’s leading climate scientists have come true, with dire consequence for the planet.

In a February 2019 Vox article, journalist and author of The Uninhabitable Earth: Life After Warming David Wallace-Wells posited of the current effects of climate change:

It’s bad. The future looks pretty dark from where we are now. So we are a little north of 1.1 degrees C of [average] warming above the preindustrial baseline, which is the historical temperature conditions that we measure global warming against. And already at 1.1 degrees, we’re seeing a lot of really extreme climate events.

Last year in the summer of 2018 in the Northern Hemisphere you had this unprecedented heat wave that killed people all around the world. You had the crazy hurricane season. In California, wildfires burned more than a million acres. And we’re really only just beginning to see these sorts of effects.

If we continue on the track we’re on now, in terms of emissions, and we just take the wildfire example, conventional wisdom says that by the end of the century we could be seeing roughly 64 times as much land burned every year as we saw in 2018, a year that felt completely unprecedented and inflicted unimaginable damage in California.

And we see trajectories like this in basically every area of potential climate impact — from impact on agricultural yields, to public health issues, to the relationship between climate change and economic growth, climate change and conflict. On virtually every conceivable metric, things are going to get considerably worse. And if we don’t change course rapidly, they’re going to get catastrophically worse.

The UN says we’re on track to get to about 4 degrees or 4.3 degrees of warming by the end of the century if we continue as we are. I don’t think that we’ll get there, this century at least. I think that we’ll take enough action to avert that. But I think it’s really important to know what it would mean to land there, because that is a much more reasonable anchor for our expectations.

Material published by the Union of Concerned Scientists revised in November 2016 detailed observable changes to the worldwide climate:

The globe is warming. In 2013, the Intergovernmental Panel on Climate Change (IPCC) concluded in its authoritative fifth assessment report that “Warming of the climate system is unequivocal, and since the 1950s, many of the observed changes are unprecedented over decades to millennia. The atmosphere and ocean have warmed, the amounts of snow and ice have diminished, sea level has risen, and the concentrations of greenhouse gases have increased”. They also stated that “Human influence on the climate system is clear.” How did they reach those sobering conclusions?

Scientists from NASA and other research institutions around the world have been routinely collecting temperature data from a wide number of locations all over the planet. Their records of Earth’s average temperature go back to the 1880s, the earliest year for which reliable instrumental records were available worldwide. The National Climatic Data Center (NCDC), which is part of the National Oceanic and Atmospheric Administration (NOAA), has maintained global average monthly and annual records of combined land and ocean surface temperatures for more than 130 years. These data show that temperatures have climbed to more than 1.8°F (1°C) above pre-industrial levels as of 2015, and the long-term global upward trend is clear and unambiguous (Figure 1)

The June 1989 Associated Press article “U.N. Predicts Disaster if Global Warming Not Checked” was authentic and accurately presented in a May 2019 Facebook post. But the implication that these prognostications about climate change had not come to pass was not accurate, as experts continued to identify events (such as extreme weather, wildfires, and coastal flooding) as previous predictions that had been validated in the thirty years since.