On August 10 2020, a Facebook user shared the following picture, purportedly taken in Seattle the previous month and showing detritus left behind by the “environmental left”:

Alongside a blurry image of a trash-filled street, the user wrote:

Seattle. Brought to you by the environmental Left.

Some commenters replied, suggesting the image was accurately labeled and described:

Yup! Total hypocrites. And I doubt they will get charged.

The post was one of several involving the same photograph, occasionally captioned: 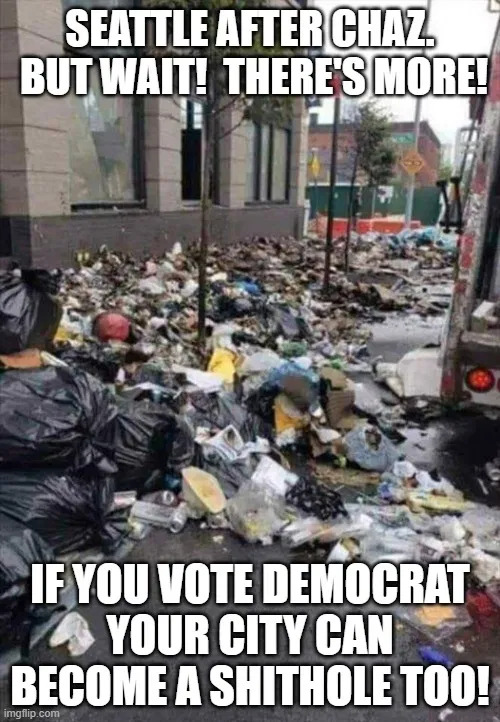 In the post above, the photograph included white text, which read:

If you vote Democrat your city can become a shithole too!

The poster appeared to be implying that the area depicted in the photo was Seattle’s CHAZ (or CHOP), a temporary “autonomous zone” created during protests in the wake of George Floyd’s death:

The Capitol Hill Autonomous Zone (CHAZ), also known as Free Capitol Hill, the Capitol Hill Occupied Protest, or the Capitol Hill Organized Protest (CHOP), was an occupation protest and self-declared autonomous zone in the Capitol Hill neighborhood of Seattle, Washington, United States. The zone, originally covering six city blocks and a park, was established on June 8, 2020 by George Floyd protesters after the Seattle Police Department (SPD) left its East Precinct building, and was cleared of occupants by police on July 1, 2020.

On August 13 2020, Brooklyn blog Greenpointers addressed the viral image, explaining that it actually showed the aftermath of a “trash fire” in Greenpoint, Brooklyn. Greenpointers also addressed a popular Twitter iteration from former comedian Drew Hastings — deleted after their post was published:

Hastings’s tweet is one of many social media posts that have repackaged the likely aftermath of a trash fire on the corner of West and Huron Streets in Greenpoint as a scene from Seattle’s protests. The image has spread throughout Twitter, Facebook and meme websites since early July [2020], shortly after police re-entered Capitol Hill, a neighborhood in Seattle.

Jared Lauridsen, a resident of Brooklyn, recently noticed the photo circulating on Facebook among his more conservative friends back home in Alabama. He was immediately skeptical.

“I suspected it was NYC due to the street sign,” he said in a message to Greenpointers.

After recognizing what he thought was an MPG Parking Garage sign (a parking garage chain in Greenpoint and other parts of the city), he found the building depicted in the photo via a quick search on Google Maps.

“I explained to my friend that it was not Seattle but didn’t get a response,” he said.

Manny Lorras, a tenant in the building complex near the corner of West and Huron Streets, confirmed that the image is “1000%” of the building on that corner. He also thinks it “has to be” the trash fire that occurred on that street on June 2 [2020] of this year.

It appears that the image’s poor quality and blurry features may have originated with a June 2 2020 video shared to Instagram by @Greenpointers:

As Greenpointers noted, the image of “Seattle” trashed by “the environmental left” seemed to begin circulating in early July 2020; the video above was shared on June 2 2020. It was also clear that the images filmed in Greenpoint, Brooklyn, was the site of the disarray — not Seattle’s CHAZ or CHOP.