Image depicts mass shooters in 2019, the majority of whom are not white men.

Two days after the August 3 2019 mass shooting in El Paso, Texas — in which the suspect expressed a range of violent white supremacist views — an image was posted to Reddit’s r/conspiracy (archived here) purportedly showing a diverse range of mass shooters from 2019:

The treacherous mainstream media has created this false narrative and focused massive amounts of blame on ‘white nationalists’ being responsible for the increasing numbers of mass shootings in this country. It’s just not true. from conspiracy

One notable aspect of the image labeled “Mass Shooters 2019” (“Every person charged with or arrested for shooting 4+ people in a single incident”) was a portion of text at the bottom of the image, unreadable even when the graphic was enlarged. It was clearly captured from an earlier image, presumably with that particular text not obscured.

On a 4Chan /pol/ thread, we located what appears to be the original, clearer image; thread here, archived here. The oldest version of the “Mass Shooters 2019” image that we could find was bordered with extremely racist language — which was cleaned up before it began appearing on Reddit, Facebook, and Twitter.

The original poster shared the image in the Reddit thread above, writing that the claim was a way to “play that game” (discussing race and mass shooting) more efficiently:

Thank you to whoever made this picture. This should be spread all over the place.

People want to use mass shootings as a way to shit on white people. Well, if they insist on bringing race into it, we can play that game better than they can. 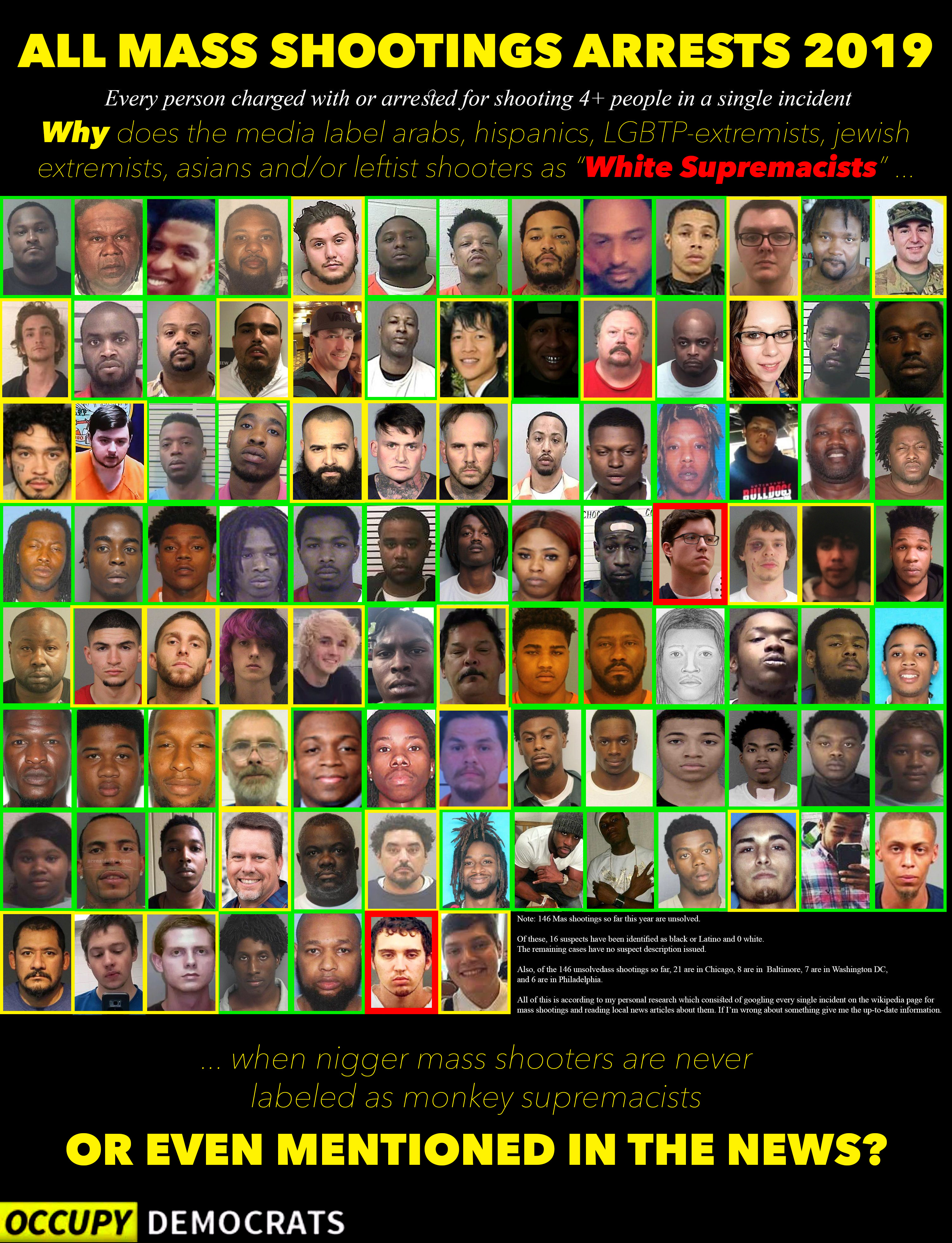 In small white text, the creator of the image wrote in either badly spelled or broken English:

Of these, 16 suspects have been identified as black or Latino and 0 white.

Also, of the 146 unsolvedass shootings so far, 21 are in Chicago, 8 are in Baltimore, 7 are in Washington DC, and 6 are in Philadelphia.

All of this is according to my personal research which consisted of googling ever single incident on the wikipedia page for mass shootings and reading local news articles about them. It I’m wrong about something give me the up-to-date information.

The emphasis here is ours. We were then able to track down the image creator’s supposed basis for the chart — the Wikipedia page “List of mass shootings in the United States in 2019.”

A separate, central issue is what is defined as a mass shooting in the United States overall. In the media, the definition of “mass shooting” is notoriously difficult to pin down — and significant debate with the intent to broaden or narrow that definition for various reasons is ongoing.

One widely-cited piece of research from 2015 [PDF] defines a mass shooting as “shootings where four or more people are killed.” According to an NBC News report, the federal government defines a mass killing as “three or more deaths in a single incident occurring in a public place.” A separate report from ABC News notes that the Federal Bureau of Investigation has no definition for “mass shooting,” but defines a “mass killing” as as an incident in which “three or more people, not including the suspect, are killed.”

There is also the National Mass Violence and Victimization Resource Center (NMVVRC), which references perhaps the most accepted definition of a mass shooting. On their site, they describe a mass shooting as an incident in which “four or more victims are murdered with firearms, within one event, and in one or more locations in close proximity.”

So far, several factors seem to “define” a mass shooting: among them, three to four victims killed by firearm (not including the shooter), and in a public place. Moreover, mass shootings are defined by the exclusion of factors. Those factors broadly seem to be: domestic violence, gang violence, and the commission of crime. Mass shootings are understood to be a specific event during which a shooter targets strangers or acquaintances in a public place — not a home, and not as a secondary act in the commission of a larger crime.

Enter the Gun Violence Archive, which has a broader definition in the presumable purpose of shining a light on the impact of gun violence versus mass shootings alone:

The Gun Violence Archive defines a mass shooting as an incident where four or more people are shot, not including the shooter. Because of that definition, the archive’s tally includes 129 shootings in which no one died.

“We do not have a generally accepted definition of mass shooting in the United States, which leads the Gun Violence Archive’s numbers to be inflated because it is based solely on a body count and not context,” said Jaclyn Schildkraut of the State University of New York in Oswego. “There are qualitative differences in a person who kills their family versus what took place in El Paso and Dayton this weekend.”

Interestingly, that anti-gun perspective seems to dovetail bizarrely with the racist viewpoint espoused in the chart —` circling back to the Wikipedia list of Mass shootings in 2019 and its unusually broad scope as compared to the broader understanding of what “counts” as a mass shooting.

The meme-maker stated that he or she individually “Googled” the incidents listed on Wikipedia’s page, presumably after the August 3 2019 El Paso Walmart shooting (which left 22 dead and dozens more injured) and the subsequent Dayton, Ohio shooting.

Of additional note is that behind the Wikipedia page is a “History” tab and a “Talk” page, both of which provide insight into the edits appended to the page at any given time. On August 4 2019, the day after the El Paso shooting (and presumably around the time the meme was created), one Wikipedia editor created a new “Talk” heading about criteria for inclusion — indicating that the number of “mass shootings” listed leapt from 20 to over 250 in one day:

One day later, another Wikipedia editor objected to edits being applied to the page and the general inclusion criteria:

Context is king, and relevant.
This article is missing context, per event. When the general public wants to know about mass shootings, most people do not care about gang violence, family murders, etc. (Note, emotions have no place in scientific data collection) There is a difference between a someone going out and shooting random strangers in public locations with group gatherings and targeted murders. To clarify – a gang member doing a “drive-by” intending to kill a specific person, or persons; or a person who has had a psychotic break and murders their family; or a person who is robbing/mugging a store or small group of people.

Although edits in the page’s history showed identical or similar iterations of the page in recent days, it is clear that a lot of “edit warring” was taking place behind the scenes. Among notes for dozens of edits to the page on August 4 2019 were:

Most of these are not “mass shootings” they are targeted incidents of rage. Out of the 250, around 5 actually qualified as “mass shootings”. Several were attributed to gange violence which should not be included in this statistic.

Removed the line: “Oh, look it’s wikipedia. Where anyone can edit. Therefore it’s not reliable.”

In other words, the definition for mass shooting on one specific Wikipedia page formed the basis of the meme’s conclusions, and that definition was not one used by almost all sources for a mass shooting — the bulk of incidents included were crimes, domestic violence, or gang activity cherry-picked to prove or disprove a specific point.

Using Wikipedia as the metric as the meme-maker described led to a list of “mass shootings” in which the number of fatalities was zero. More than half of the list were zero-fatality mass shootings.

By contrast, the vast majority of the dozens of “mass shooters” in this meme were not among the perpetrators responsible for the actual mass shootings in the United States in 2019 by any definition.