Chances are you’ve seen some version of this purported Durex advertisement in heavy circulation at some point during the COVID-19 pandemic, featuring and comparing a face mask with a condom:

The screenshot above included commentary from a separate post, “Durex have smashed it with this lockdown advert.”

Protect Yourself & Your Loved Ones

It was clear that the purported Durex advertisement enjoyed considerable exposure on social media, spreading on Twitter:

Durex absolutely nailed it with this ad! pic.twitter.com/nVCnBA834Y

We noticed that earlier versions of the purported Durex advertisement frequently featured languages other than English, and some initial iterations looked less like Durex’s branding:

At the same time the meme was circulating, Durex’s various region-specific accounts were sharing advertising campaigns which referenced the COVID-19 pandemic.

On May 19 2020, the global account @Durex promoted their #LetsNotGoBackToNormal campaign — but it didn’t include the image of a mask and a condom side by side:

When this is all over, let's not go back to normal. Normal just wasn't good enough.#Durex #LetsNotGoBackToNormal pic.twitter.com/5E3Uo00BaY

On May 28 2020, TheDrum.com explored Durex’s coronavirus messaging, and a “disruptive” strategy that went a lot deeper than the mask/condom analogy. That coverage explored Durex’s advertising efforts and the brand’s concurrent research into sex and the pandemic:

As countries around the world outline plans to ease lockdown restrictions and people begin to look toward some semblance of normality, Durex’s most significant lockdown push has boldly asked people not to go back to ‘normal’ when it comes to sex.

Pointing to ‘norms’ such as shaming women who carry condoms, or men not wearing them because they don’t like the ‘feel’, the brand argues that the current crisis represents a unique chance to reset what ‘normal’ looks like.

The push is being delivered across owned channels and social, as well as further executions over the coming weeks. OOH mockups have been widely shared online too.

“Pre-normal before Covid-19 was one in five women enjoying their first sexual experience. It was a million STIs every day. It was LGBTQ people feeling all sorts of anxieties and pressures. Normal was not good. So we want to challenge those conventions.”

That coverage didn’t mention masks at all, and it also didn’t include a reference to iterations of the meme with Durex’s branding in languages other than English. Other advertising industry sites covered Durex’s COVID-19 advertising at length, but always without the mask and condom meme.

Durex’s various, verified and country-specific accounts continued sharing pandemic-related advertising in June and July 2020. However, @Durex on Instagram did not share the advertisement in the meme, instead posting more in-depth content about sex and COVID-19:

With less physical contact, your sexual satisfaction may have decreased. Durex believes everyone deserves good sex! Get the best tips and advice for me-time here https://www.durex.co.uk/blogs/explore-sex/everything-you-ever-wanted-to-know-about-masturbation

Because it's the most satisfying place to be in right now! #StayingInIsEffingGood

On July 2 2020, Durex USA’s Facebook page shared a post that did reference condoms as well as face masks: 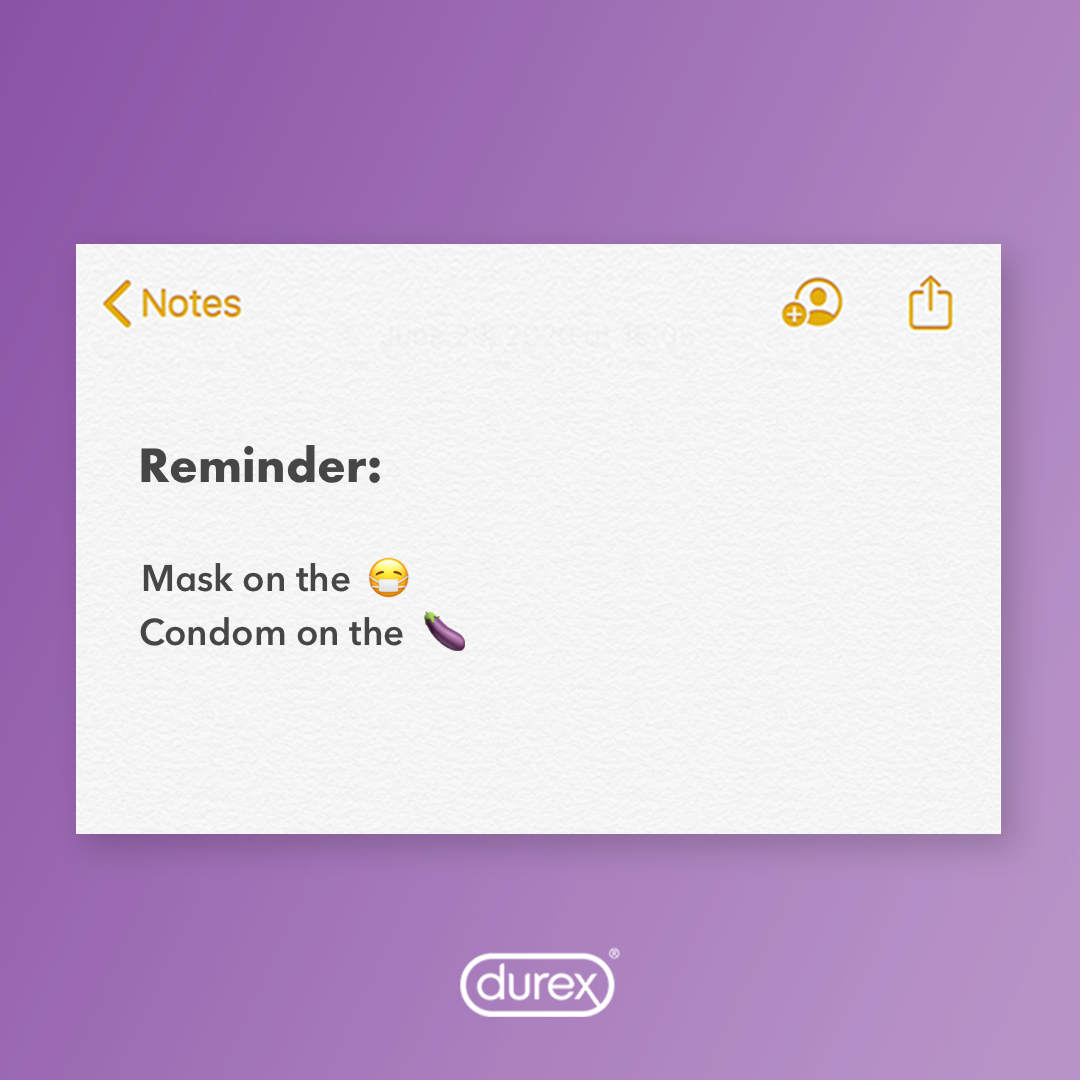 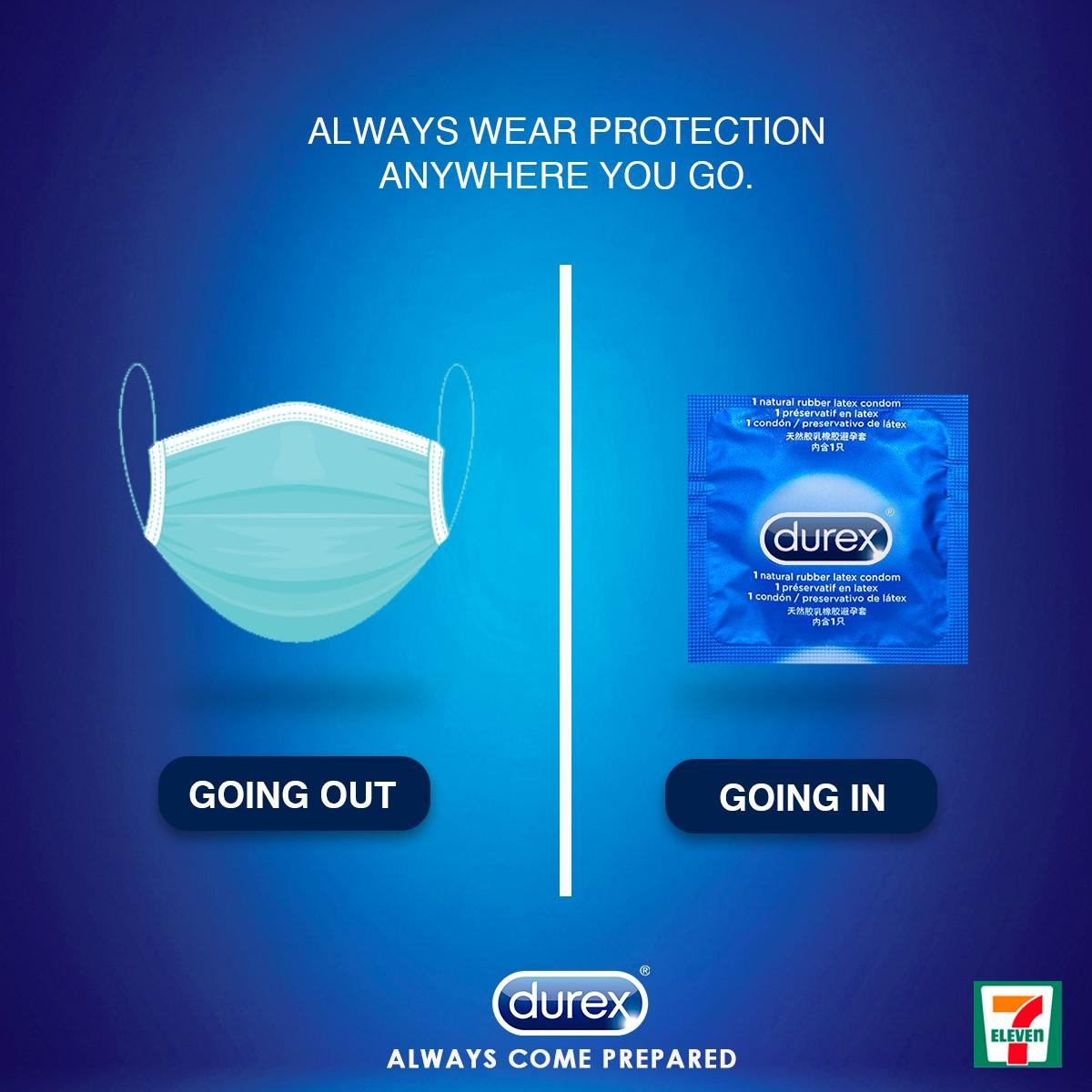 At first glance, it looked like the advertisement was partly “memed” into existence. But an “about” section on @DurexPH’s Facebook page explained that it was created by fans:

Intense Passion (Durex Philippines) Facebook fan page is a platform for fans to share, discuss and to get to know more about Durex, its benefits and effects. Contents which are posted by fans do not necessarily reflect the opinion of Durex Philippines …

Although variations on that artwork are still spread as a “condom ad,” the imagery was in fact a creative work and not an advertisement as such.

A COVID-19 themed, purported condom advertisement labeled “Durex have smashed it with this lockdown advert” featuring a comparison between a condom and a mask spread in June and July 2020, but it didn’t appear to be the work of Durex or any agency working on their behalf. Durex did create pandemic-specific advertisements, but the campaign did not feature masks, and it had a completely different hashtag and focus. The creator of the image remains unknown, but Durex never seemed to claim the image for itself despite its global popularity — making it unlikely that it was specifically commissioned or endorsed by the company.