Italy will stop caring for elderly patients who are infected with novel coronavirus strain COVID-19.

As Italy grappled with the spread of COVID-19,  American Facebook users took that as their opportunity to insult a national health service. “Italy has decided NOT to treat their elderly for this virus !!!! That, my friends, is Socialized Healthcare!!!!”one such user wrote on March 14 2020: 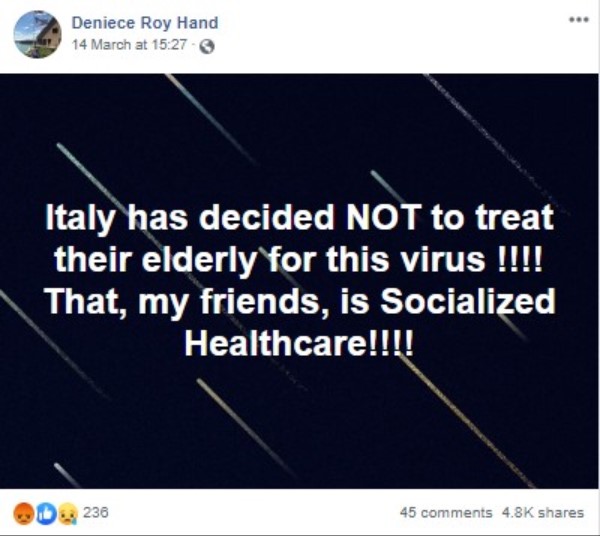 The post produced the usual amount of “funny” responses:

But in reality, the post is a distortion of the effect of the disease on Italy, which reported 24,747 cases and 1,809 deaths as of March 15, 2020, a 25 percent increase in fatalities over the day before. According to Reuters, a quarter of the country’s population is age 65 and older, the highest percentage in Europe.

The post was an apparent response to guidelines issued by the Italian College of Anesthesia, Analgesia, Resuscitation and Intensive Care (SIAARTI) predicting an increase in patients requiring intensive care “of such magnitude as to cause an enormous imbalance between the real clinical needs of the population and the actual availability of intensive resources.”

The group also acknowledges that the pandemic presents extraordinary circumstances forcing providers closer to practicing “catastrophe medicine,” where the regular criteria of first-come first-served for patients may not apply and therefore, providers should try to prioritize patients with the “greatest life expectancy.” According to SIAARTI:

It may be necessary to place an age limit on entry into intensive care. It is not a question of making choices merely of value, but to reserve resources that could be very scarce to those who are primarily more likely to survival and secondarily to those who can have more years of life saved, with a view to maximizing of benefits for most people.

But what Hand’s post also failed to consider was that similar choices were also being discussed in capitalist countries, such as the United States, where — as the Washington Post reported — 3,244 infections and 62 deaths had been confirmed as of March 15 2020.

According to the newspaper, pandemic strategy plans in several states, many of them written in the aftermath of the SARS outbreak of 2002 and Hurricane Katrina a year later, address the question of rationing care:

Hospital officials and doctors interviewed in several states emphasized that rationing is a last resort, and they have begun to experiment with other ways to increase capacity.

Initially, they said, patients probably would be transferred from more crowded, urban facilities such as Johns Hopkins in Baltimore and the University of Pennsylvania Health System in Philadelphia, which routinely operate at 80 to 90 percent capacity, to community or rural hospitals that may have more intensive care beds.

If the number of victims surges beyond that capacity, they say, they may try novel approaches such as having two patients on one ventilator. Tubing for ventilators, which is usually thrown out, could be sanitized and reused. Other types of hospital equipment, such as those used for sleep apnea, could be repurposed as makeshift ventilators. Only if those strategies fail and the sick continue to exceed capacity would rationing protocols be put into place.

However, approaches vary by state and even by hospital.

“Most plans include a list of serious conditions that would exclude someone from getting a ventilator if rationing were in effect, and many conditions are more common in the elderly, such as severe cardiac issues, kidney failure and metastatic cancer,” the report said.