A painting depicting J. Marion Sims' experiments on enslaved Black women is on display at the Alabama state Capitol.

Amid the removal and re-evaluation of statues commemorating historical figures in June 2020, a Facebook post that spread widely in June 2020 conflated a statue of a gynecologist who experimented on enslaved Black women with a painting depicting him alongside one of those women.

The post by comedian Earthquake (a.k.a. Nathaniel Stroman) features a cropped photograph of the painting, which depicts Sims and two other men observing a woman identified as Lucy. Stroman’s post, which has been shared more than 70,000 times on Facebook, states:

This painting hanging in the state capital of #Alabama take a long look at it. #JamesMarianSims – who perfected his surgical techniques by operating Without anesthesia on enslaved #blackwoman because he believed black women Didn’t Feel Pain. he described the experimental surgeries on his enslaved subjects as “So painful, that none but a woman could have borne them. After perfecting the techniques on black enslaved woman with out anesthesia in America, Sims went on to offer the procedure in Europe to wealthy white women who were sedated. This man is arguably the most famous American surgeon of the 19th century. I see him no different than Josef Megele both pure monsters.I hope everyone who goes to the gynecologist will close their eyes for a moment and honor these enslaved black women. I cannot, Cannot fathom the pain these black women endured under this man’s hands. And that painting…. who should be honored? The irony is also in their clothes. Some people, society look at people’s status, respect even on how one is dressed. The one who should be honered and respected is the one who owns no shoes. 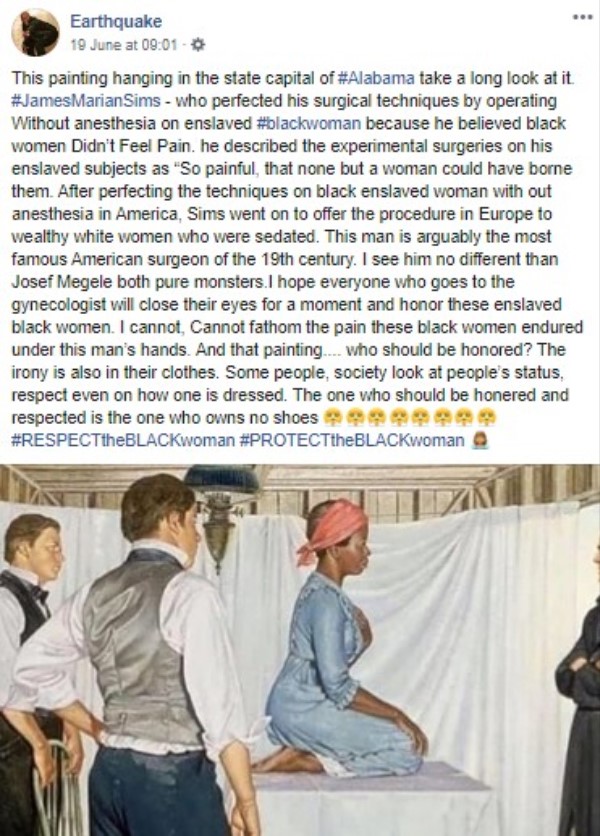 There is no record of the painting being on display at the Alabama State Capitol building. The full version of the painting shows Sims standing in front of Lucy, while two other women identified as Anarcha Westcott and Betsy watch from behind a makeshift curtain: 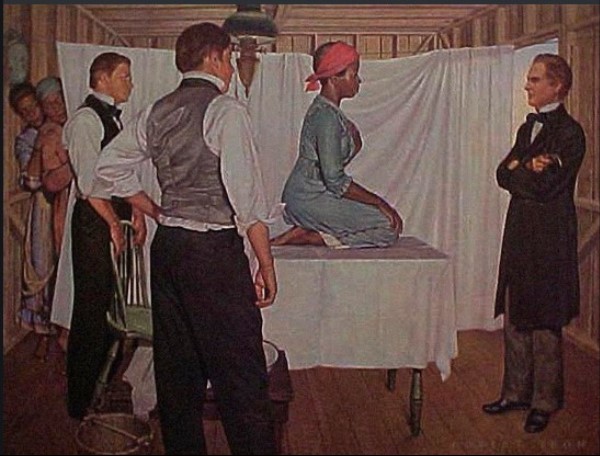 Robert A. Thom’s painting is part of the series “Great Moments in Medicine,” which he did on commission by the pharmaceutical company Parke-Davis & Co. between 1948 and 1964. In 2007 Pfizer (which had acquired the collection of 45 paintings after buying out another company, Warner-Lambert) gave it to the University of Michigan Museum of Art, where they have been archived.

The accompanying text for the painting, composed by Parke-Davis pharmacist George A. Bender, reads:

Little did James Marion Sims, M.D., (1813-1883) dream, that summer day in 1845, as he prepared to examine the slave girl, Lucy, that he was launching on an international career as a gynecologic surgeon; or that he was to raise gynecology from virtually an unknown to respected medical specialty. Nor did he realize that his crude back-yard hospital in Montgomery, Alabama, would be the forerunner of the nation’s first Woman’s Hospital, which Sims helped to establish in New York in 1855. Dr. Sims, who became a leader in gynecology in Europe as well as in the United States, served as president of The American Medical Association, 1875-1876; and was honored by many nations.

However, the museum’s description of the piece adds more context:

By way of blinded valorization, Bender’s text sterilizes Sims’ years-long experimentation on the bodies of “Anarcha, Betsy, Lucy and about nine other unidentified enslaved women and girls” from 1844 to 1849. Eclipsed by Bender’s mythical-heroic account of Sims was the agonizing pain suffered by the patients experimented on before the wide use of anesthetics. At the same time, the enslaved labor responsible for the very construction of Sim’s “crude back-yard hospital” is rendered invisible. As Bender drew heavily upon Sims’ memoir to craft his captions, he, much like Sims, also failed to acknowledge the fact that the enslaved female patients were expected to continue their servitude even as patients. These women not only cooked, cleaned, and cared for the Sims family, but effectively kept the Alabama hospital running, serving as Sim’s surgical nurses throughout the five-year period of their “treatment.”

Like Bender’s caption, Thom’s illustration also lionizes Sims, who stands with his arms folded at the head of the hospital scene. The illustration reproduces a racist, medical gaze, as it prompts the observer to join the ranks of other visiting surgeons who ogle Lucy as a medical object of curiosity. Through proper contextualization and careful visual study, we might challenge this supposed “great moment in medicine” and consider the contradictions of “scientific achievement” and the entanglements of violence, slavery, and medicine.

While there is no record of the painting of Sims and Lucy being displayed at the Capitol, a separate painting showing Sims standing near Westcott and calling him one of the “medical giants of Alabama,” was on display at the University of Alabama-Birmingham before being removed in 2006. In 2017, Dr. Vanessa Gamble — a physician and historian at George Washington University — reaffirmed in a radio interview that Sims performed thirty surgeries on Westcott alone in the course of his experimentation, which was conducted without anesthesia:

There was a belief at the time that black people did not feel pain in the same way. They were not vulnerable to pain, especially black women. So that they had suffered pain in other parts of their lives and their pain was ignored.

Sims is credited with discovering a surgical technique that could repair the condition known as vesicovaginal fistula, as well as the first successful gallbladder surgery, and the first artificial insemination procedure that resulted in a pregnancy, although it resulted in a miscarriage and was described by The Atlantic as “an ethical nightmare.”

While there is no painting of Sims at the Alabama State Capitol, a statue of him first erected there in 1939 still stands, despite calls for its removal. A separate statue honoring Sims in New York City was taken down in April 2018. A separate monument to Sims is still on display outside the State House in his native South Carolina.