The Marvel character Jane Foster had never been depicted as the superhero Thor prior to the 2022 film "Thor: Love and Thunder."

In an example of using memes to fight pop culture disinformation, a graphic circulating on the platform Imgur refutes the misconception that Natalie Portman’s appearance in an upcoming Marvel Studios movie is a modern concession to “woke” politics.

Portman is set to reprise her role as Jane Foster in the July 2022 movie “Thor: Love And Thunder.” This version of the character was introduced as a scientist, but the film’s trailer reveals that she has seemingly acquired the mystical hammer Mjolnir and the powers associated with the mantle of Thor (played by Chris Hemsworth):

As is often the case, the idea that a superhero can be portrayed by someone other than a white cis-het male has become easy online fodder.

“Marvel has decided to ruin every male character for the ‘MESSAGE’ and became M-She-U (a term given by fans because of Marvel’s woke agenda),” one woeful blog reads. “The problem is not that Women are getting much more recognition but Marvel has ruined its movies and TV Shows by downgrading Male Characters and sacrificing story and quality for the ‘Agenda’.”

The graphic contrasts online takes bemoaning Portman’s return to Marvel films (also known as the Marvel Cinematic Universe, or “MCU” for short) with the actual cover page to Marvel Comics’ “What If” No. 10, first published in May 1978. 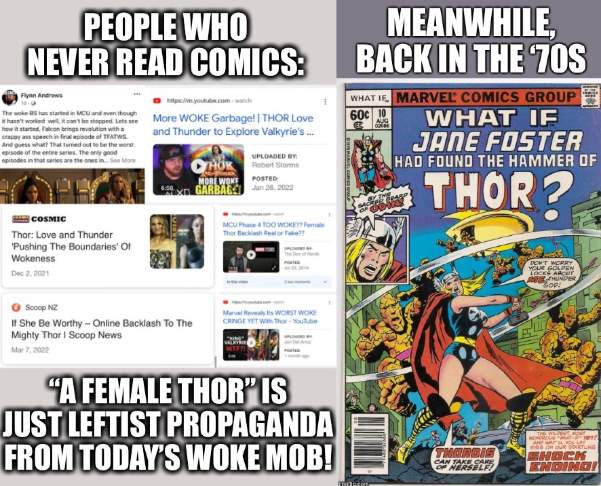 The anthology series told single-issue stories set in various alternate histories of the Marvel Comics universe. This particular issue, “What If Jane Foster Had Found The Hammer of Thor?” shows Foster not only discovering Mjolnir (Thor’s customary weapon) but becoming a warrior for Asgard in her own right under the name Thordis. The story concludes with her marrying Thor’s father Odin while Mjolnir is passed down to Donald Blake and re-aligning this history with primary canon, in which Blake acts as Thor’s tether to the Earth realm.

Foster herself took on the mantle — and the name — of Thor in primary Marvel canon (or the 616 universe, as it is known) in the series “Thor,” first published in October 2014: 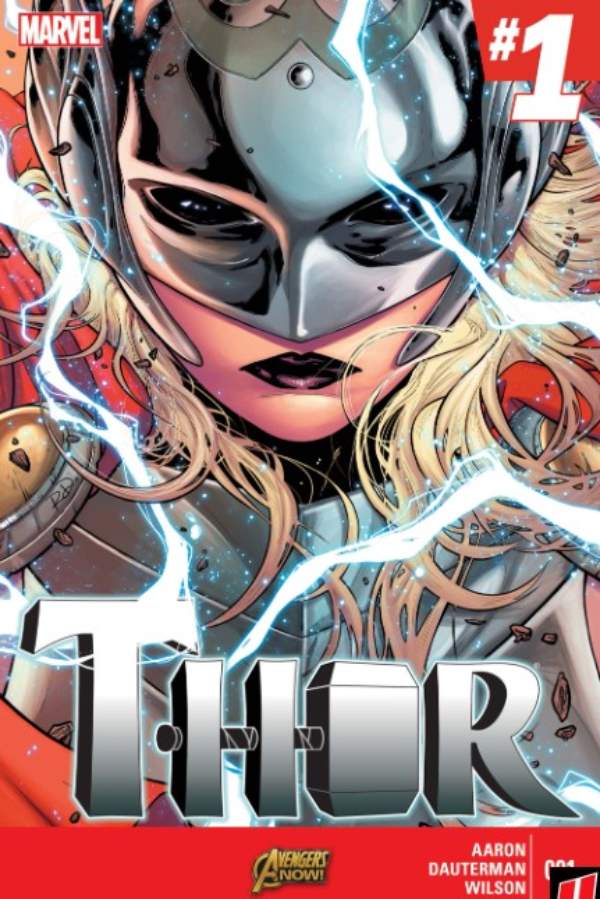 In this series, however, the power came at a price; readers learn that the process of Foster transforming into Thor impedes her ongoing cancer treatment.

At the time, some “fans” reacted negatively to the idea of a woman taking on the Thor name. The E! Network’s website reported that its own comments section was replete with complaints: 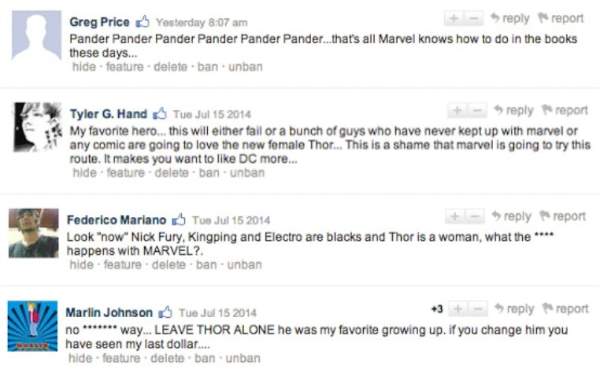 “I hate all this manipulation of characters just to appeal to everyone,'” one anonymous commenter griped. “They suddenly want to change already written characters races and sex and that’s just not cool.”

Jason Aaron, who wrote the series, told the Washington Post in response:

I think a lot of people who were taking that [view] on it, who claimed to be big-time Thor fans, they didn’t seem to know too much about what the character had been up to for the last several years. If they’re freaking out that much just because Thor is a woman, I think they’ve missed some of the lessons that maybe the character has been trying to teach them over the course of the last 600 issues.

Portman’s casting as Foster in “Love and Thunder” was announced in 2019. It is unclear whether this version of Foster will also be a cancer patient on top of a hero.

“You don’t want Natalie coming back and playing that same character who’s walking around with science equipment,” director Taika Waititi told Empire magazine. “You know, while Thor’s flying around, she’s left on Earth, tapping her foot going, ‘When’s he going to be back?’ That’s boring. You want her to be part of the adventure.”