On January 9 2022, a top post on Reddit’s r/all claimed that farmers in the United States had won the “right to repair” John Deere equipment; the post originally appeared on r/news:

An Imgur post shared on the same day featured a headline about John Deere and the “right to repair.” Both posts hinted at a victory — perhaps in court — which sounded like it had firmly granted owners of John Deere equipment the ability to service as they saw fit: 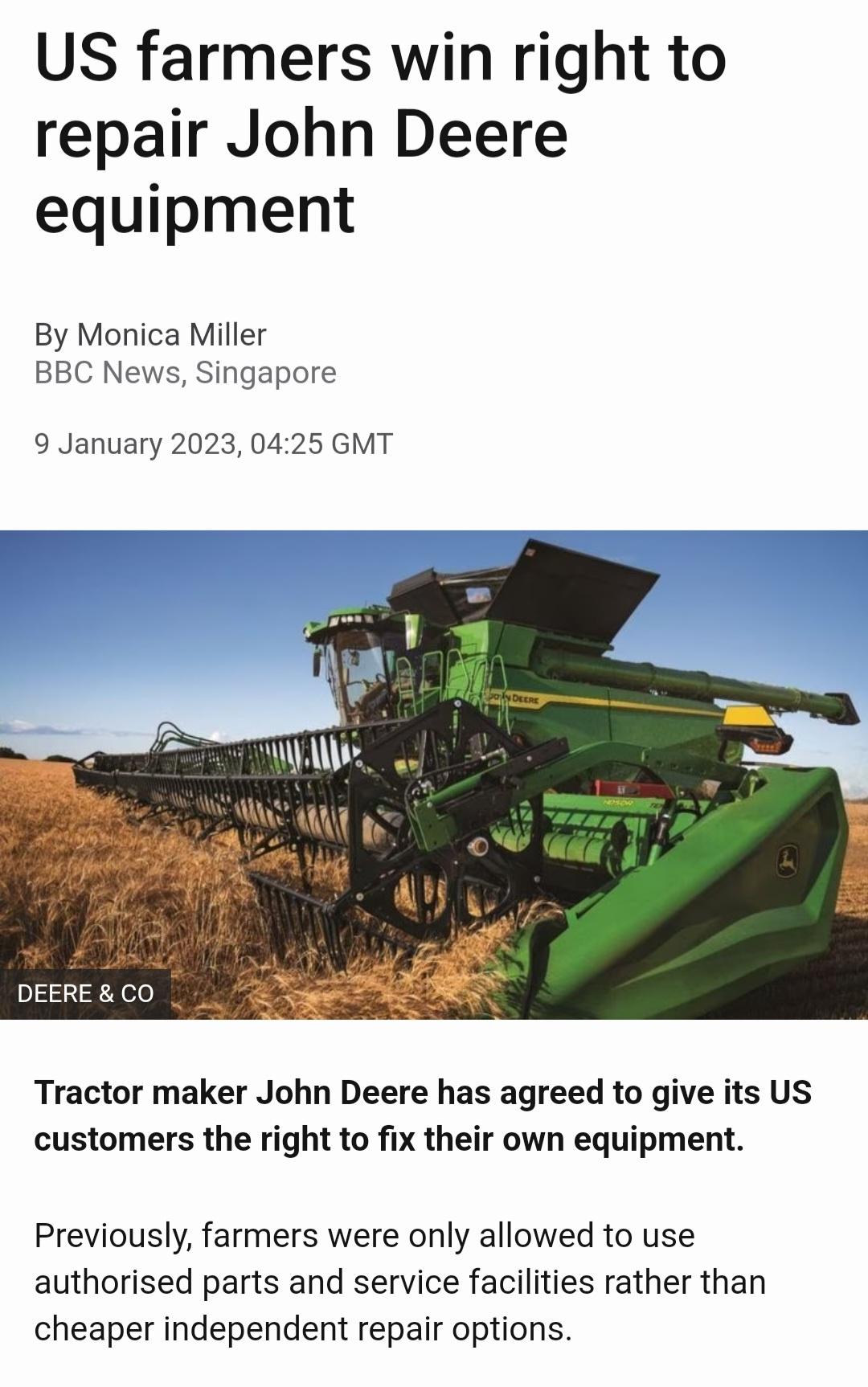 On the surface, news about tractor repair did not seem relevant to modern technology; the claim needed some background context.

What is ‘Right to Repair’ in the Context of John Deere Equipment?

“Right to repair” as a concept appeared intermittently in the news in the years leading up to the January 2023 John Deere news story.

A July 2021 article by the New York Times‘ consumer-centric subdomain Wirecutter began with an example about a very common “right to repair” related problem:

Imagine that you spent over a thousand dollars on your laptop just a few years ago, but now it barely holds a charge. Without a new battery, you’re tethered to an outlet, which is both wildly inconvenient and not the point of a laptop. But it turns out that a new battery is impossible to install anyway, so you feel forced to drop another grand on a new laptop, even though your old one works perfectly fine otherwise. This is actually a near-universal experience, whether it involves a laptop, a phone, or a car.

As products get more difficult to repair, a growing right-to-repair movement has been pushing for legislation that requires access to repair tools. [In July 2021], President Joe Biden signed an executive order that pushes the Federal Trade Commission to make third-party product repair easier, but that’s just part of the larger issue. Let’s take a look at how and why any of this matters.

… The idea behind “right to repair” is in the name: If you own something, you should be able to repair it yourself or take it to a technician of your choice. People are pretty used to this concept when it comes to older cars and appliances, but right-to-repair advocates argue that modern tech, especially anything with a computer chip inside, is rarely repairable.

A June 2022 blog post on the electronics repair site ifixit.com both defined and advocated for the consumer’s right to repair electronics:

When you buy something, you should have the right to repair it, whether that means taking it to the repair shop of your choice or fixing it yourself. Manufacturers of all kinds of things—smartphones, tractors, wheelchairs, and beyond—unfairly limit their customers’ repair options, making repair more expensive and difficult.

The Right to Repair movement is a broad international effort to secure our repair options and prevent repair limitations. Right to Repair laws have three main goals: preserving the right to open your stuff, increasing the availability of the parts and tools you need, and keeping independent repair shops in business.

In that blog post, ifixit.com described several anti-repair strategies used by manufacturers to hinder the practice. John Deere was one of three manufacturers referenced:

Some manufacturers go even further than restricting access to original parts and actually block third-party options. HP was caught using fake error messages to obstruct third-party ink cartridges; HP then paid out a hefty settlement to its printer customers. Apple discourages third-party parts with “unable to verify” warnings that show up as persistent messages on your lock screen and get added to your device information. John Deere puts their tractors into a slow-drive “limp mode” when some errors show up until those errors are cleared by dealer-only software. These disingenuous alerts and artificial feature limitations erode trust in independent repair, driving customers back into the manufacturer repair monopoly.

New York Governor Kathy Hochul signed the groundbreaking Digital Fair Repair Act (A7006B/S4104A) into law late last night [December 28 2022]. The signing of the bill makes New York the first state in the country to enact a digital right to repair law. The new law will give New York consumers the right to fix their electronic devices by a repair servicer of their choosing rather than being forced to go through the device manufacturer.

Marta Tellado, president and CEO of Consumer Reports, said, “This landmark law will save New Yorkers money, provide them with more convenient repair options, and cut down on waste. When your device is broken, you should have more options than a high-priced service or the landfill. The Digital Fair Repair Act will ensure that New York consumers have the choice to fix their own electronic products or have them fixed by a servicer they choose, including those independent of the manufacturer. We congratulate Governor Hochul for signing this key piece of legislation, which will extend new digital rights to millions of New Yorkers.”

Right to repair legislation continues to gain support throughout the country as manufacturers have made it difficult to make simple repairs on their expensive devices, such as smartphones, tablets and laptops. These manufacturers have restricted access to basic diagnostic information, tools, and replacement parts needed to make repairs. These tactics force consumers to rely on the manufacturer or its hand-picked servicers. Without competition and choice, repair costs get inflated. In some cases, the manufacturer even refuses to repair the product at all, forcing the consumer to throw it away and buy a new one.

During the lull between last Christmas and New Year’s [in 2022 and 2023], New York State became one of the first in the country to enact a “right to repair” law — albeit with amended language that some advocates say make the law toothless. Called the Digital Fair Repair Act and set to go into effect on July 1 [2023], New York’s regulation requires manufacturers to provide owners and independent repair shops the manuals, parts, diagnostics and diagrams necessary to repair consumer devices.

Which devices does the Digital Fair Repair Act cover, exactly? Well, a lot — any that constitute as “digital electronic equipment,” basically. But there are some carve-outs, including cars, home appliances, medical devices, off-road equipment and enterprise devices used by data centers, schools and hospitals.

The legislation only applies to gadgets manufactured after July 1 [2023] … The bulk of [that and other] exceptions were added at the eleventh hour with the approval of Governor Kathy Hochul, who said in a statement that they’re intended to lessen the risk of security issues and physical harm while making repairs …

A January 9 2023 Bloomberg Law piece about the New York State law reiterated the claim the bill was “watered down” between its passage and being signed into law:

Gov. Kathy Hochul (D) signed the bill into law days before the new year [2023], but only after agreeing to a series of amendments that repair advocates say watered down the legislation.

The changes removed language that required manufacturers to provide passwords to overcome security locks; exempted products sold directly to businesses or the government; and clarified that manufacturers don’t have to license intellectual property to repair shops or consumers. The law doesn’t apply to home appliances, motor vehicles, and medical devices.

TechNet, a group that represents Apple Inc., Google LLC, and other tech companies, lobbied against the bill, but applauded the changes.

Chris Gilrein, TechNet’s director for Massachusetts and the Northeast, said in a statement to Bloomberg Law that while the New York bill “and similar legislation remains a serious threat to intellectual property rights, TechNet’s members greatly appreciate the significant strides made by the Administration to address the most critical consumer protection and operational issues.”

Tractor maker John Deere has agreed to give its US customers the right to fix their own equipment … The American Farm Bureau Federation (AFBF) and Deere & Co. signed a memorandum of understanding (MOU) on Sunday [January 8 2022].

Under the agreement, equipment owners and independent technicians will not be allowed to “divulge trade secrets” or “override safety features or emissions controls or to adjust Agricultural Equipment power levels.”

BBC linked to a memorandum of understanding (PDF), published to the Farm Bureau site (fb.org), and dated January 8 2023. A January 9 2023 engadget.com article described the MOU as a “pact,” and described it as a concession of sorts to stave off less voluntary outcomes:

The pact is characterized as a “voluntary” private arrangement. However, it comes alongside mounting political pressure that effectively gave John Deere little choice but to improve repairability. President Biden ordered the Federal Trade Commission to draft right to repair regulation in 2021, while states like New York have passed their own (sometimes weakened) legislation. If Deere doesn’t act, it risks legal battles that could limit where and how it does business in the country.

Tech site The Verge‘s “John Deere commits to letting farmers repair their own tractors (kind of)” reported that John Deere retained the right to “exit the agreement if state or federal right-to-repair laws go into effect.” In particular, the site pointed to language in the MOU discouraging agricultural support for a legally-codified right to repair:

The memorandum of understanding ensures that John Deere makes its software, tools, and documentation available to both farmers and independent repair shops. It also notes that owners and third-party technicians can’t compromise a machine’s safety features through modifications and assures that John Deere’s copyrighted software “is fully protected from illegal infringement,” likely through modifications made by hacking.

Although this seems like a step in the right direction, it’s written in a way that could allow John Deere to skirt federal or state right-to-repair legislation. In the agreement, the AFBF says it will encourage “state Farm Bureau organizations to recognize” these commitments and “refrain from introducing, promoting, or supporting federal or state ‘Right to Repair’ legislation.” If any right-to-repair legislation passes, the AFBF and John Deere can withdraw from the agreement. In other words, it looks like John Deere wants to partake in right-to-repair on its own terms — not through legislation that could potentially cement and expand repair rights for consumers.

As indicated in the excerpt, language on page four of the MOU held:

A. AFBF agrees to encourage state Farm Bureau organizations to recognize the commitments made in this MOU and refrain from introducing, promoting, or supporting federal or state “Right to Repair” legislation that imposes obligations beyond the commitments in this MOU. In the event any state or federal legislation or regulation relating to issues covered by this MOU and/or “Right to Repair” is enacted, each of AFBF and Manufacturer reserve the right, upon fifteen (15) days written notice, to withdraw from this MOU.

Several January 9 2023 social media posts suggested that American farmers had “won” the right to repair John Deere equipment, a development that emerged in the context of a years-long effort to enable people to service and fix proprietary electronic equipment. In actuality, the American Farm Bureau Federation entered into a voluntary agreement with John Deere. In that agreement, the Farm Bureau agreed “to encourage state Farm Bureau organizations to recognize the commitments made in this MOU and refrain from introducing, promoting, or supporting federal or state “Right to Repair” legislation that imposes obligations beyond the commitments in this MOU.” In other words, the John Deere right to repair “victory” appeared to amount to a concession by John Deere, including clauses discouraging support for a codified right to repair.