In order to boost circulation and rake in more advertising money, hoax and satire sites will sometimes re-run some of their older work hoping to catch clicks while the topics of their stories are once again relevant.

This is a common practice with many media sites, but satirical or fake stories can wind up getting pushed back into the ecosystem if the topic is complicated or controversial, further muddying the discourse. There are also entities invested in smearing others for political or personal reasons who enthusiastically join in.

Such was the case in August 2018, when a years-old hoax about Canadian prime minister Justin Trudeau suddenly began to pop up again, pushed by the usual array of bots and trolls.

According to these stories, Trudeau had “recently” (but secretly, naturally) converted to Islam, 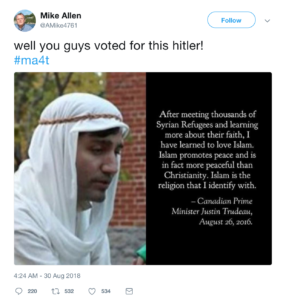 This story is a hoax. Although its 2018 versions appear to be intended to smear Trudeau in some way by saying he is part of one of the world’s largest religions, this story apparently started life way back in the summer of 2016 as satire on a website called VaticanEnquirer.com. That story links to another page, TheGlobalSun.com, which is either now defunct or never existed to begin with, and all misspellings are from the original.

In a 13 minute press conference Friday, Trudeau explained his decision in his life:

“After meeting thousands of new Syrian refugees, listening to their stories and learning more about the Muslim faith, I have learned to love Islam and the people of Islam. Islam promotes peace, not violence and is in fact more peaceful that Christianity. I feel like this is the religion I belong with and I should identify as,” reported the theglobalsun.com

During the press conference, Trudeau dodged questions about his wife, Sophie, and children converting. All the Prime Ministe would say on the subject is that they are very supportive of his decision, but were unavailable for comment.

How do we know this story is satire? Because the site says so:

The Vatican Enquirer is a satirical look at headlines around the world. Billed as “the news closer to being a lie than the truth”, the website is meant to be fun, to entertain.  If it’s not here it’s because you have damaged the inter-net.

The stories are not real and purely fictional. All details are fabricated, and is not intended for readers under 18 years of age. Invented names are use in all of its stories, except in cases of known public figures being satirized. Any other use of real names is purely accidental and coincidental.

Other versions of this rumor included video purportedly “proving” Trudeau’s conversion to Islam:

This video is actually from a 2013 visit to a mosque in western Toronto, before Trudeau was elected prime minister:

Trudeau was leader of the Liberal Party when he visited the Jamea Masjid mosque in Surrey, British Columbia, in West Canada.

In the video, he is seen wearing traditional Islamic clothing as he delivers a speech that he begins with the Muslim greeting “peace be upon you.”

In his speech, he thanked worshipers for granting him the honor of praying with them, adding that the values of the holy month of Ramadan were also Canadian values.

The image showing Trudeau wearing a headdress was lifted directly from a 2016 photograph showing him with his son on Halloween, then flipped by someone so that a reverse image search would not be able to pull it up quite so easily, putting this iteration less into the “satirical” category of hoaxes and more of the “deliberate disinformation” one: 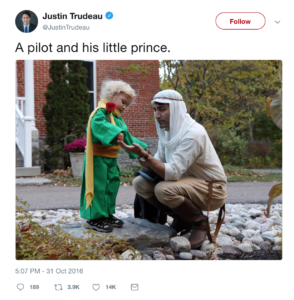 Despite these efforts, however, the hoax remains just that — a hoax.