Actor Keanu Reeves once worked as a CBC TV reporter and covered a teddy bear festival in 1984.

A glimpse of actor Keanu Reeve’s first media jobs spread online once again in May 2022, thanks to a movie podcast.

The show, “All The Right Movies,” posted a clip of Reeves’ work as a correspondent for the CBC Television program “Going Great,” for which he covered the 1984 Canadian International Teddy Bear Convention:

Before he was a Hollywood actor, KEANU REEVES worked for CBC and did a news report on a Teddy Bear convention in 1984. pic.twitter.com/kXV8kyOWfB

“Why are all the bears’ first name ‘Teddy’?” Reeves asks at one point: 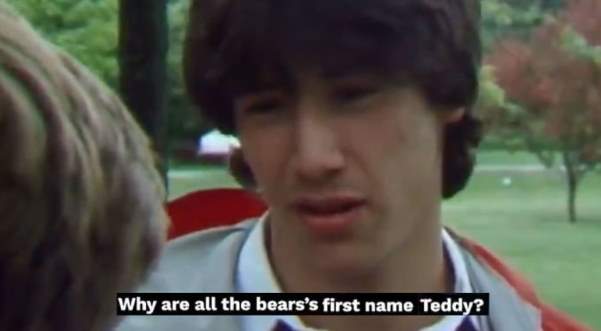 The tweet has been shared thousands of times on the platform. But the footage itself is not new to the Internet; in 2019, the network’s own Twitter account posted highlights of Reeve’s work on the show saying, “Before he was Ted, Neo, or John Wick he was CBC’s Keanu Reeves!”

Before he was Ted, Neo, or John Wick he was CBC's Keanu Reeves! | #KeanuReeves 🎥🎥 pic.twitter.com/4hL1Op04rv

And CBC also posted Reeve’s report on the teddy bear convention on Twitter and Facebook on September 9 2020 in observance of National Teddy Bear Day:

Who better to honour a childhood favourite than Canada's beloved Keanu Reeves!

Since then, clips of Reeve’s reporting days — including his attempts to go horse riding or learn how to juggle — have periodically resurfaced and shared around the Internet. times in recent years.

Reeves talked about his short tenure on the show in a 2017 interview with “Tonight Show” host Jimmy Fallon:

“Did you learn how to do anything?” Fallon asked.

“Interview people, I guess,” Reeves said, adding, “They fired me after the first year. I got one year on ‘Going Great,’ and then it wasn’t going at all. I was thinking that maybe I got the show canceled, but there was one more year after me.”

The program was originally produced for a thirteen-episode run, but as the Windsor Star reported in 1983, the U.S. cable channel Nickelodeon bought an additional 26 episodes. Its final episode aired in February 1984.

Though born in Lebanon, Reeves spent most of his early life in Toronto. In December 2021, Reeves marked his induction into the Canadian Walk of Fame by paying respect not just to the city but to the artistic scene that spurred him to become an actor.

“Shout out to the movie theatres that changed my life,” he said. “Bloor Street cinema, the University cinema, the Eglinton cinema, Roncesvalles, and the 1984 Toronto International Film Festival.”