A tweet depicts a mugshot of Rep. Lauren Boebert (R-Colorado).

On May 17 2021, Imgur u/wheezer18 shared a Twitter screenshot with a purported mugshot of Rep. Lauren Boebert, in a post that also said, “Shameless repost. Cause fuck her. She’s an asshat”: 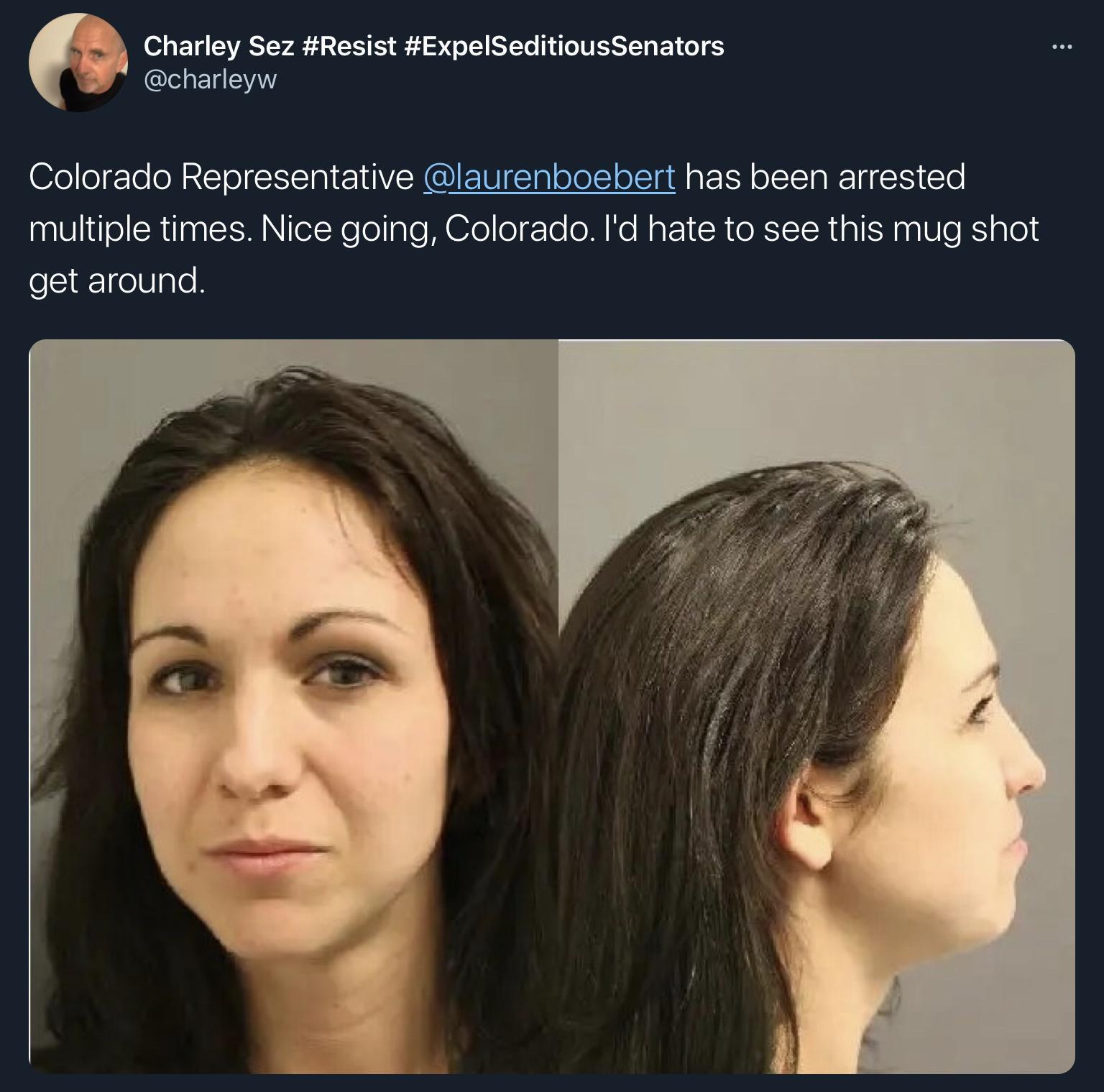 Although the date was cropped out of the screenshot, the tweet was originally published on January 14 2021 by @charleyw, whose display name at the time read “Charley Sez #Resist #ExpelSeditiousSenators”:

Colorado Representative @laurenboebert has been arrested multiple times. Nice going, Colorado. I'd hate to see this mug shot get around. pic.twitter.com/3DsqOyvDsj

Colorado Representative @laurenboebert has been arrested multiple times. Nice going, Colorado. I’d hate to see this mug shot get around.

Determining whether Boebert had ever been arrested was straightforward.  One of the first links returned from an image search was an August 2020 Denver Post article, “Congressional candidate Lauren Boebert has a history of minor arrests, court no-shows.” That two-image set was the page’s featured image, and a caption read:

Congressional candidate Lauren Boebert — who often espouses a pro-police, law-and-order message on the campaign trail — has been arrested and summonsed at least four times over the past decade, records show.

While the three arrests and one court-ordered summons were for petty crimes — and in one case all charges were dropped — Boebert’s record is unusually long for a congressional candidate … Boebert’s first run-in with police was in the fall of 2010, after a neighbor, Michele Soet, alleged that Boebert, then 23, was harassing Soet and Soet’s husband. The alleged harassment occurred in the days after Soet called police because Boebert’s pit bulls were loose and threatening the life of her dogs.

A few paragraphs later, the story mentioned that Boebert was arrested twice in Mesa County in 2015, adding that as she “was being handcuffed for disorderly conduct, Boebert tried to twist away from police, according to deputies’ reports.” It continued, describing a series of court absences and her subsequent arrest:

Boebert was released from custody and told to appear in court that August [2015] but missed her court date because, as she told a judge, she forgot what day of the week it was. “I am now aware today is Friday,” she wrote on Aug. 28, 2015, hours after she was supposed to be in court.

The judge, Craig Henderson, rescheduled for later that year. But Boebert again was a no-show at a Nov. 20 [2015] hearing. In a handwritten note to the judge, she did not include a reason for her absence … On Dec. 1, 2015, Boebert was arrested by sheriff’s deputies for failure to appear, according to Colorado Bureau of Investigation arrest records. The next month [in January 2016], the disorderly conduct charge was dismissed because there was “no reasonable likelihood of conviction should (the) case go to trial,” a prosecutor wrote at the time.

Failing to appear for court also landed Boebert in jail a year later [in 2017]. As first reported by the Colorado Times Recorder, Boebert was charged with careless driving and operating an unsafe vehicle after rolling her truck into a Garfield County ditch in the summer of 2016. They were minor traffic charges, but Boebert skipped an October [2016] court date.

She was booked into the Garfield County Jail on the morning of Feb. 13, 2017, for failure to appear and spent exactly 100 minutes as an inmate before being released on bond, according to sheriff’s office records. She later pleaded guilty to the unsafe vehicle charge, and the careless driving charge was dropped.

Although the tweet did not include dates or context, the Denver Post (Boebert represents Colorado in the House) reported on her arrests in an August 2020 article. According to the outlet’s review of law enforcement records, Boebert had been “arrested and summonsed at least four times over the past decade” as of 2020, with a rap sheet it described as “unusually long for a congressional candidate.” The mugshot seen on Twitter in January 2021 and Imgur in May 2021 resulted from Boebert’s 2016 arrest, and a missed October 2016 court date. On February 13 2017, Boebert was arrested, had her mugshot photo, and was booked into a Colorado jail before being bailed out that day.