An image shows a mite known as "Demodex," which lives on your face.

On October 25 2019, the Facebook page “Cheerful Nihilism” shared the following meme, purportedly depicting a Demodex mite, which according to the meme lives on human faces:

Above an apparent illustration of an alien-like insect, text read:

Are you lonely? Don’t be. Demodex is a type of mite that lives on your face. Friends forever.

The meme was identical to a Reddit r/pics thread shared in November 2018:

Are you lonely? Don’t be. Demodex is a type of mite that lives on your face. Friends forever. from pics

A top comment on that thread reflected what was likely a common reaction to the coupled title and image:

I swear, the microscope has opened up more horrific images than anything humans had thought up previously

A Google Image search for the graphic returned “demodex” as a result, but that was likely due to its widespread appearance in the meme, and in Twitter screenshots of the post.

Demodex is indeed a genus of “tiny mites that live in or near hair follicles of mammals”; two species in that genus are known to exist on humans, Demodex folliculorum and Demodex brevis. The former (as its name suggests) inhabits hair follicles, and the latter exist in the sebaceous glands of humans — which, yes, can be found on the face.

However, microscopic images of Demodex mites are far less detailed than the meme’s illustration suggested: 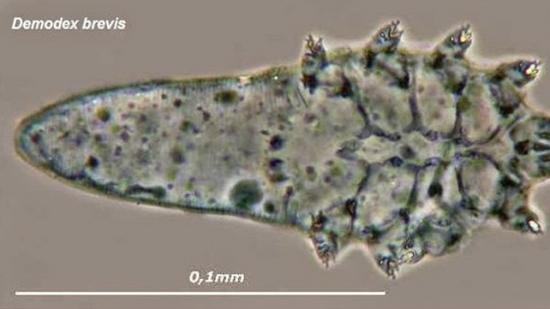 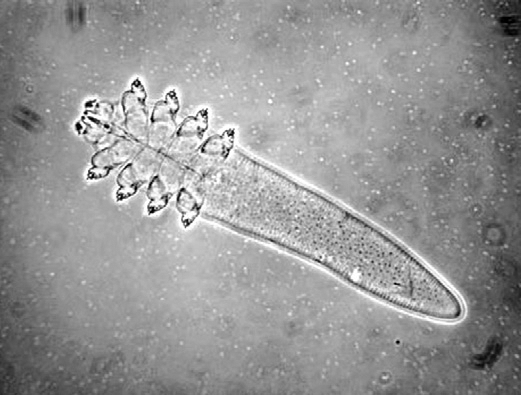 Demodex brevis at the top were slightly less narrow but largely similar to Demodex folliculorum on the bottom. In the meme, it’s strongly implied that all people have Demodex mites crawling on and about their person, but a 2012 story in Discover magazine about the Demodex genus noted that while the mites are “common,” they are far from universal:

These mites are our most common ectoparasites (those that stay on the surface of our bodies, rather than burrowing inside). They’ve been found in every ethnic group where people have cared to look, from white Europeans to Australian aborigines to Devon Island Eskimos … But it’s hard to say exactly how common they are. The first estimate came from a 1903 study, which found the critters in 49 out of 100 French cadavers. The next count, from 1908, found them in 97 out of 100 German cadavers. The nationalities are probably a red herring. What’s clearer is that age matters. The mites aren’t inherited at birth, so each generation picks them up anew, probably from direct contact with our parents. Thanks, parents! If you’re under 20, good news! A French study from 1972 says that you’ve only got a 4 percent chance of carrying Demodex. If you’re old, bad news! You’ve almost certainly got Demodex somewhere.

For instance, Demodex folliculorum are not found on infants or children, but are common in the elderly and are often acquired during a normal human lifespan. That article also noted that “face mites … have sex on your face,” “‘crawl about your face in the dark,’ lay eggs in your pores, and release a burst of faeces when they die.” Images accompanying that piece looked like the ones above, not the cheerfully horrifying meme.

As for the meme’s image, its first crawled appearance on the internet was in a November 2009 blog post where commenters were asked to identify the creature shown. Commenters quickly came to guess “silkworm,” reaching an apparent consensus. In 2013, the image was shared to a different subreddit as a “caterpillar under a microscope”:

The face of a caterpillar under a microscope. Look familiar? (X-Post from r/WTF) from SCP

However, many links in the post were no longer working, and blog posts around 2013 often identified the image simply as a “caterpillar.” The image was hosted on Science Photo Library, with a caption explaining it was a colored scanning electron micrograph (SEM) image depicting the head of a silkworm moth caterpillar (Bombyx mori):

Silkworm. Coloured scanning electron micrograph (SEM) of the head of a silkworm moth caterpillar (Bombyx mori). The silkworm uses its chewing mouthparts (upper centre) to feed on mulberry leaves. On either side of the mouthparts is an antenna and several simple eyes (ocelli, black round structures, upper left and right). The caterpillar has three pairs of jointed legs behind the head (lower centre). Most caterpillars also have prolegs further along the body (not seen).

A Scanning Electron Microscope (SEM) is an electron microscope which generates images by scanning a sample’s surface with a focused beam. A similar image featured by another scientific stock image site included a similar description:

Color-enhanced SEM of the caterpillar of the silk moth (Bombyx mori), probably the most famous in the world. More than 4,000 years ago, the Chinese began to breed and domesticate them, because the material they use to spin their cocoons for pupation is unique: a strand of silk, ten times thinner than the human hair and three kilometers long. What is more, it is tear-proof and elastic. The thread, with these wonderful qualities, comes out of the spinneret – the organ which can be seen underneath the head, just above the front pair of legs. The long, sharp claws are also conspicuous. They are the perfect tools for climbing, in order to get at the leaves of the mulberry tree – the only nourishment silk worms can tolerate. But they eat these leaves with a passion: in the 5 weeks of their caterpillar stage, they increase their weight by 10,000 times, half of which goes into its highly productive spinneret. Magnification 31:1 at an image size of 15×15 cm.

The image from the meme was a suggested “conceptually similar” entry on the second site, and a slightly different caption appeared for the meme’s illustration:

Silkworms (Bombyx mori) are the larvae (caterpillars) of the silk moth. They feed only on mulberry (Morus sp.) leaves. The caterpillars produce fine silk cocoons around themselves as they pupate for metamorphosis. The silk is harvested for use in clothing and fabrics. Once the cocoons have been produced, the pupae are killed to ensure the silk is not damaged by the emerging moths. REM 31x.

A popular meme originated with an inaccurate post on Reddit’s r/pics, originally titled “Are you lonely? Don’t be. Demodex is a type of mite that lives on your face. Friends forever.” It’s true that two of over 60 species of the Demodex mite live on the faces of some humans (Demodex brevis and Demodex folliculorum), but microscope images of those two species do not look like the meme’s image. The meme featured a science stock image, a micrograph of the face of silkworm (Bombyx mori) larvae. Silkworms do not live on the faces of humans, and the image itself was not representative of “face mites.”