A "Christian leader" who said God uses extreme weather to "punish gay people" later experienced his home being destroyed by flooding in Louisiana.

On January 14 2021, an Imgur user shared the following screenshot of a headline (“Louisiana Floods Destroy Home of Christian Leader Who Says God Sends Natural Disasters to Punish Gay People”), in a post titled “Such dramatic way of coming out”: 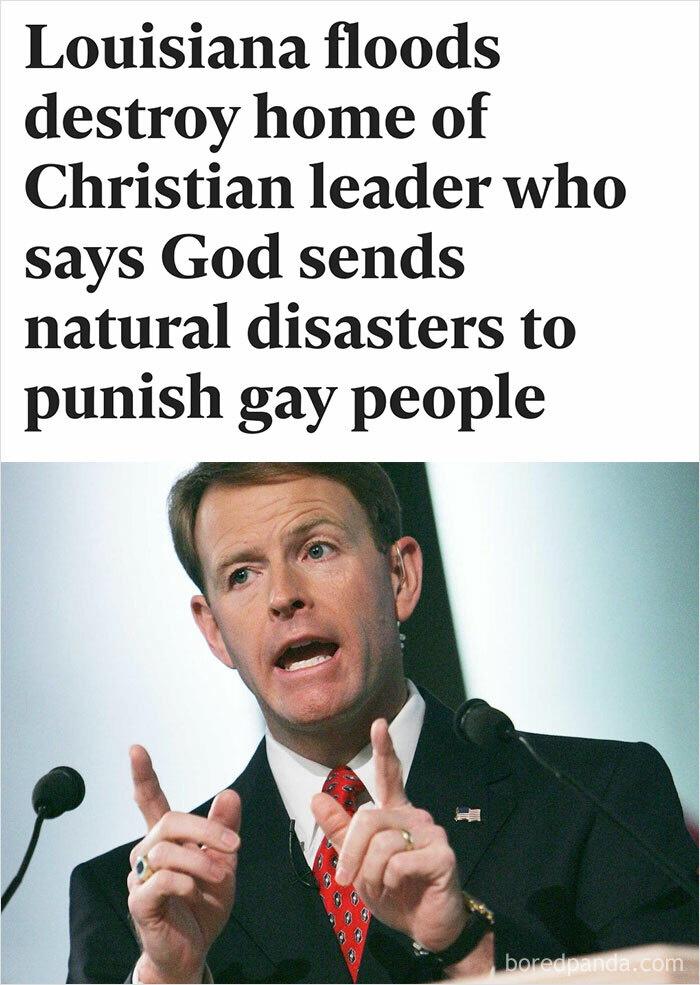 No contextual information was included, and the only other content was the hashtag “#gay” in the body of the post. At the bottom right-hand corner of the image, a BoredPanda.com watermark was visible.

Searching for the headline led to additional information about the screenshot, namely that it was published by the UK’s Independent on August 18 2016. A subheading read “He has also claimed that paedophilia is a ‘homosexual problem,'” and it began:

A flood has destroyed the home of a Christian lobbyist who preached that God sends natural disasters to punish gays.

During a broadcast on the group’s radio station, he told how he and his family had fled in a canoe.

However, the article did not further expound on its titular claim that Perkins had previously blamed “gay people” for devastating weather patterns, saying only that he “a long and well-documented history of disparaging gay people.” One of the closest portions stated broadly:

In 2012, a group of Muslim clerics joined some Christian preachers in attributing the superstorm Sandy which devastated areas of America, Haiti and Cuba on the wrath of God.

An opinion piece published in the Guardian (also based in the UK) on the same day in August 2016 maintained:

In modern times, conservative evangelicals have claimed floods, such as the one that followed Hurricane Katrina in 2005, are God’s punishment for moral decay. By moral decay, they typically mean abortion or homosexuality.

One prominent evangelical who’s a fan of this line of thinking is Tony Perkins, the head of the rabidly anti-gay Family Research Council.

In a 2015 interview with Messianic Jewish pastor Jonathan Cahn, Perkins agreed that Hurricane Joaquin, a devastating storm that hit the Bahamas last year, was “a sign of God’s wrath”, punishment for abortion and for the legalization of same-sex marriage … You could be forgiven for thinking of this as some kind of twisted justice, or at least as a delicious bit of divine irony.

In the course of the editorial, its author mentioned an October 2015 radio segment in which Perkins and Jonathan Cahn discussed, among other things, weather and God’s retribution. A description stated:

On this weekend edition of “Washington Watch with Tony Perkins” New York Times bestselling author of The Harbinger, Senior Pastor and Rabbi of Beth Israel Worship Center, Jonathan Cahn, joins Tony to discuss his book, The Mystery of the Shemitah, which could have major implications for America. Also, Louisiana Governor, and current GOP presidential candidate, Bobby Jindal, is here to discuss the letter he sent to the Governor of Iowa, explaining how he can defund Planned Parenthood in his state. Governor Jindal will also comment on the airstrikes taking place in Syria by Russia combat planes.

In order to listen to Perkins’ interview with Cahn, it was necessary to download an MP3 file and open it on a device. Roughly 13 minutes into the conversation, Cahn touched on the use of a rainbow for gay pride, and floated the notion that hurricanes and other weather are manifestations of the wrath of God; Perkins appeared to vaguely concur.

A BBC story described the exchange as follows:

In 2015, he interviewed extreme Messianic Jewish pastor Jonathan Cahn who told him that Hurricane Joaquin, which devastated Hawaii last year, was a “sign of God’s wrath”.

During the interview, Mr Cahn stated that the storm was a sign God was angry about the legalisation of gay marriage and abortion and the relationship between the United Nations and Israel.

He’s quoted as agreeing, adding “God is trying to send us a message”.

In summary, a viral Imgur screenshot showed a headline, “Louisiana Floods Destroy Home of Christian Leader Who Says God Sends Natural Disasters to Punish Gay People,” but lacked further context. The headline was from an August 2016 article, and though it discussed Louisiana flooding, it did not appear to include a strong indication that Perkins previously linked homosexuality with deadly weather. A separate editorial in The Guardian indicated that Perkins and a Messianic Jewish pastor named Jonathan Cahn discussed the topics of abortion, gay people, and weather as God’s retribution in October 2015.