In August 2022, Rep. Majorie Taylor Greene (R-Georgia) objected to solar and renewable energy because she didn't "want to have to go to bed when the sun sets."

On August 14 2022, an Imgur account and Facebook page shared the same Twitter screenshot, which appeared to imply that Rep. Marjorie Taylor Greene (R-Georgia) had objected to renewable energy, such as solar, because she didn’t want to “go to bed when the sun sets”: 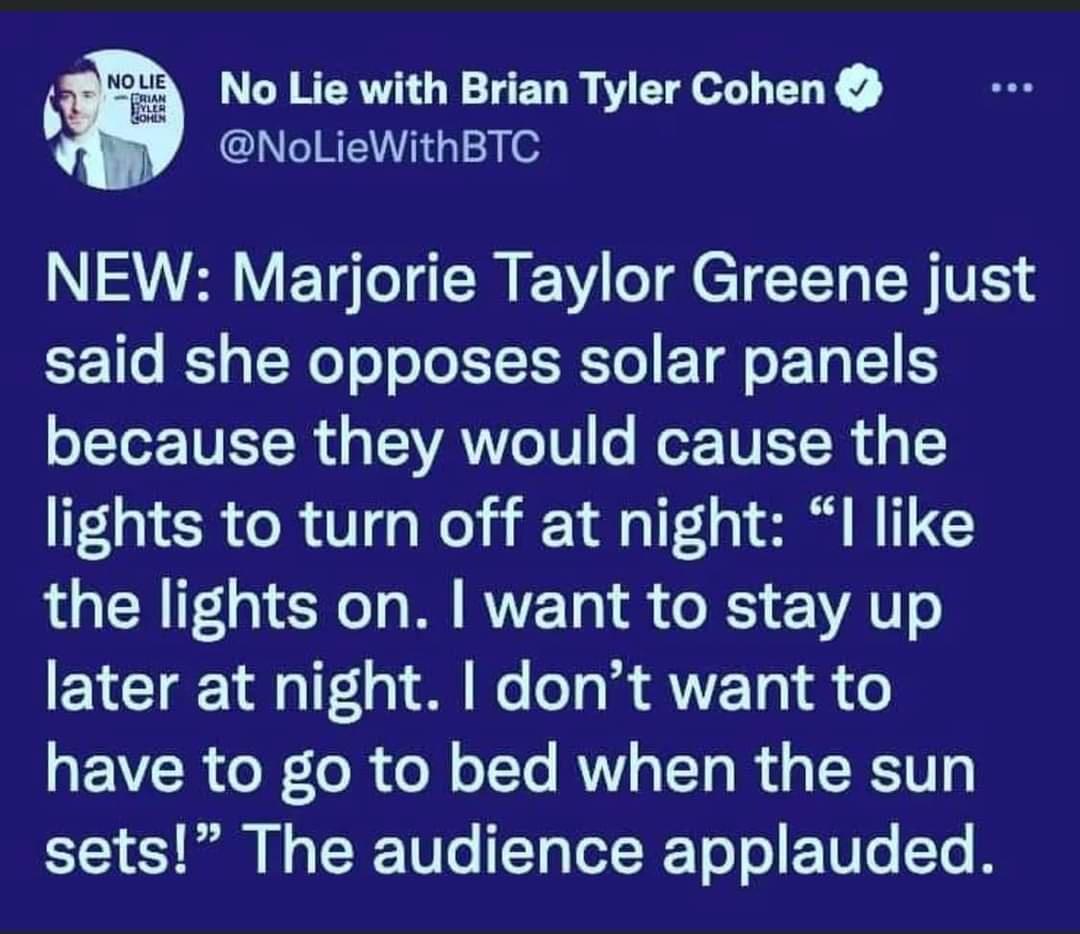 “You’re not you when you hunger for the flesh of the bourgeoisie” shared the image posted to Imgur (above), which is a tweet by @NoLieWithBTC. Both variations had an unusual blue-tinted background, no visible date, and their text read:

NEW: Marjorie Taylor Greene just said she opposes solar panels because they would cause the lights to turn off at night: “I like the lights on. I want to stay up later at night. I don’t want to have to go to bed when the sun sets!” The audience applauded.

Reverse image search returned three individually posted versions of the screenshot, none of which included a date. A Twitter search for most of the text of the tweet returned no results.

On August 13 2022, @NoLieWithBTC published a similar (but not identical) tweet, the text of which said:

Marjorie Taylor Greene just said she opposes solar panels because she thinks they would cause the lights to turn off at night.

In lieu of the transcribed portion, @NoLieWithBTC retweeted a video clip of Greene speaking (originally shared by @PatriotTakes):

Marjorie Taylor Greene just said she opposes solar panels because she thinks they would cause the lights to turn off at night. https://t.co/BDeVSlbitG

In the attached video, Greene said:

Ladies and gentlemen … We’re all in Georgia, can we just say thank god for air conditioning? Let’s talk about refrigerators — I personally like my refrigerator! I know you all like yours.

What about washing machines and dryers? Lord, please God, don’t make me scrub clothes in a bucket, and have to hang them out on a line when we switch over to wind turbines and solar panels, I’m gonna be really pissed off about that.

I mean, how absurd is this? I like the lights on! I wanna stay up later at night, I don’t wanna have to go to bed when the sun sets. It’s so silly! I mean all of this is insane.

Clearly, the remarks were real; we found no evidence of their circulation prior to August 13 2022. However, news mentions of Greene’s viral remarks did not include information about where or when she made them, nor could we find information about the context of the remarks on her website or on Twitter timeline.

On her site, an “Issues” menu included an “Energy” section. It read in full:

On August 13 2022, remarks attributed to Rep. Marjorie Taylor Greene about solar energy (“I don’t wanna have to go to bed when the sun sets!”) began circulating on Twitter, Facebook, Imgur, and Reddit. The remarks were clearly accurately transcribed, but we were unable to find information about the date, location, or nature of Greene’s appearance. A section on her website to disclose her views on energy in general advised visitors to “contact our office” for more information, and did not provide further details.

Because of the fact that [As?] we have been unable to find the provenance determine the context of [this] video as yet [thusfar?], we are marking it [rated the claim] Unknown out of an abundance of caution; however, it was circulated [began circulating] around the same time as discussions [occurred] around the Inflation Reduction Act — which includes a significant focus on mitigating climate change — as part of a coordinated disinformation push against renewable energy.”

We have been unable to find the provenance or context of the video so far, so we rated the claim Unknown; however, it began circulating  around the same time as public discourse around the Inflation Reduction Act — which includes a significant focus on mitigating climate change — suggesting that it is part of an inauthentically coordinated disinformation push against renewable energy.