For context, Facebook announced it was changing its name to “Meta” on October 28 2021 (a date that will later be important). Text of the status update read:

A screenshot showed what appeared to be an open letter from a company called “MetaCompany,” titled “Facebook Stole Our Name and Livelihood”: 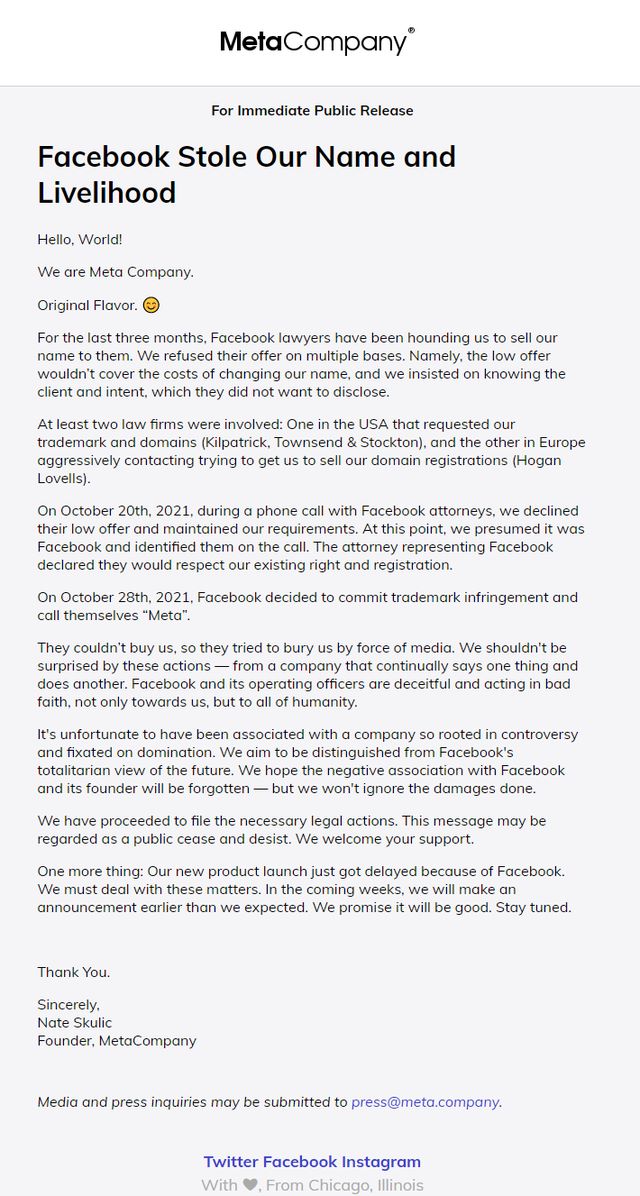 For Immediate Public Release
Facebook Stole Our Name and Livelihood

We are Meta Company.

For the last three months, Facebook lawyers have been hounding us to sell our name to them. We refused their offer on multiple bases. Namely, the low offer wouldn’t cover the costs of changing our name, and we insisted on knowing the client and intent, which they did not want to disclose.

At least two law firms were involved: One in the USA that requested our trademark and domains (Kilpatrick, Townsend & Stockton), and the other in Europe aggressively contacting trying to get us to sell our domain registrations (Hogan Lovells).

On October 20th, 2021, during a phone call with Facebook attorneys, we declined their low offer and maintained our requirements. At this point, we presumed it was Facebook and identified them on the call. The attorney representing Facebook declared they would respect our existing right and registration.

On October 28th, 2021, Facebook decided to commit trademark infringement and call themselves “Meta”.

They couldn’t buy us, so they tried to bury us by force of media. We shouldn’t be surprised by these actions — from a company that continually says one thing and does another. Facebook and its operating officers are deceitful and acting in bad faith, not only towards us, but to all of humanity.

It’s unfortunate to have been associated with a company so rooted in controversy and fixated on domination. We aim to be distinguished from Facebook’s totalitarian view of the future. We hope the negative association with Facebook and its founder will be forgotten — but we won’t ignore the damages done.

We have proceeded to file the necessary legal actions. This message may be regarded as a public cease and desist. We welcome your support.

One more thing: Our new product launch just got delayed because of Facebook. We must deal with these matters. In the coming weeks, we will make an announcement earlier than we expected. We promise it will be good. Stay tuned.

Media and press inquiries may be submitted to [email protected]

Based on the rapid share count on that single post, tens of thousands of people read that letter and found its claims to be plausible. Clicking through the post’s first list led to the domain meta.company, and a website consisting solely of the letter seen above.

Beneath that letter were three hyperlinks — Twitter, Facebook, and Instagram — and that’s where the letter’s claims began to look a little suspect to us. All three social platforms (through which companies often maintained active presences) appeared to be brand new. Its Twitter displayed a questionable “Joined October 2021” section, and a singular tweet published on November 1 2021:

A message from our Founder,https://t.co/EmEr9QkCzE

Likewise, the linked Instagram’s only post was from “3 days ago” on November 5 2021. And Facebook’s “Page Transparency” section for MetaCompany’s linked Facebook page indicated that it was first published on October 31 2021 — three days after Facebook’s October 28 2021 announcement:

The text content of the viral post included a United States Patent and Trademark Office (USPTO) record for a MetaCompany, which was evidently filed in 2016: 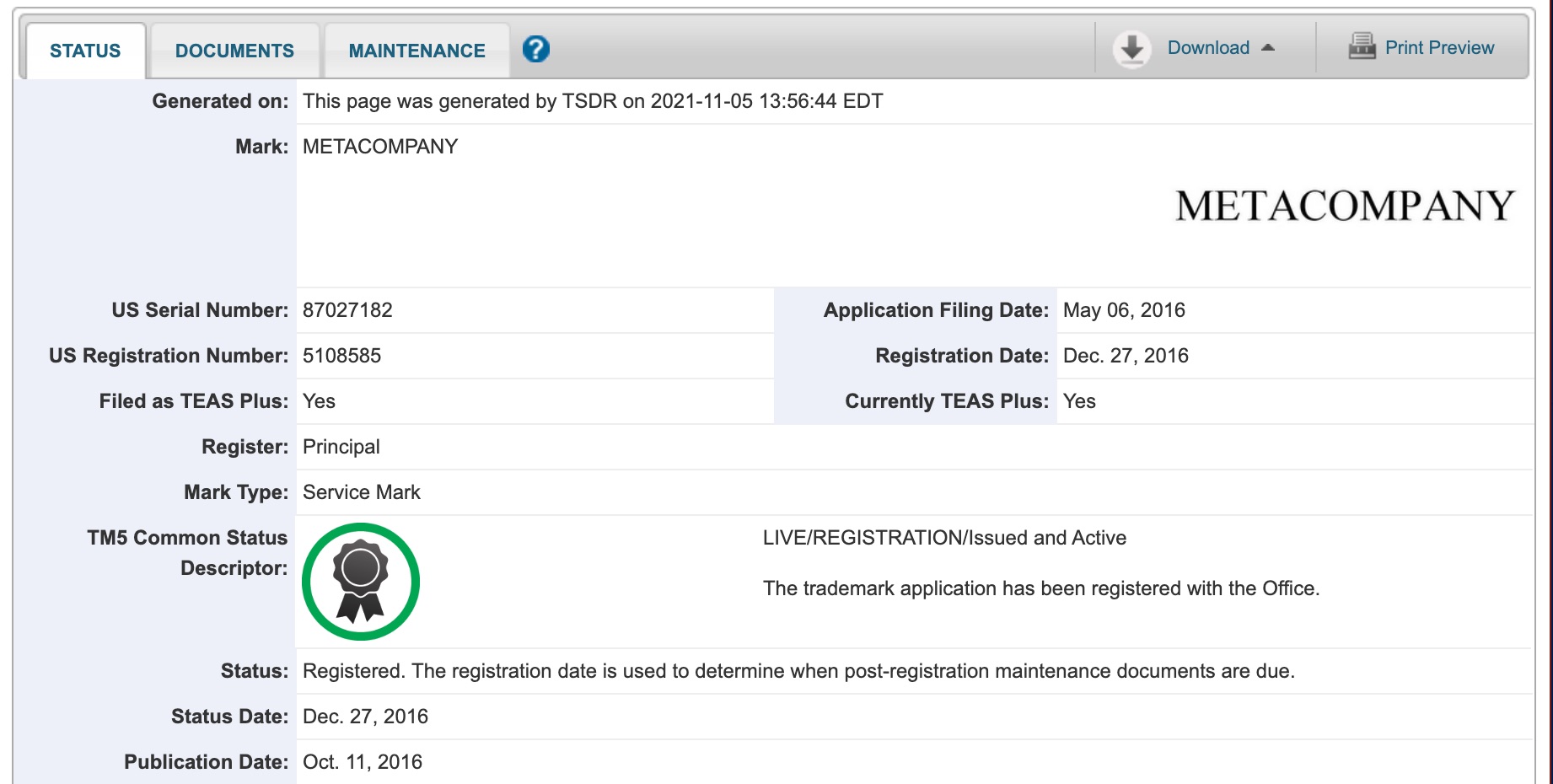 However, nothing in that record clearly linked the USPTO “METACOMPANY” record with the “meta.company” domain or social media accounts, the latter of which only became active after Facebook announced its name change. Another link pointed to a WHOIS domain registration record for meta.company. 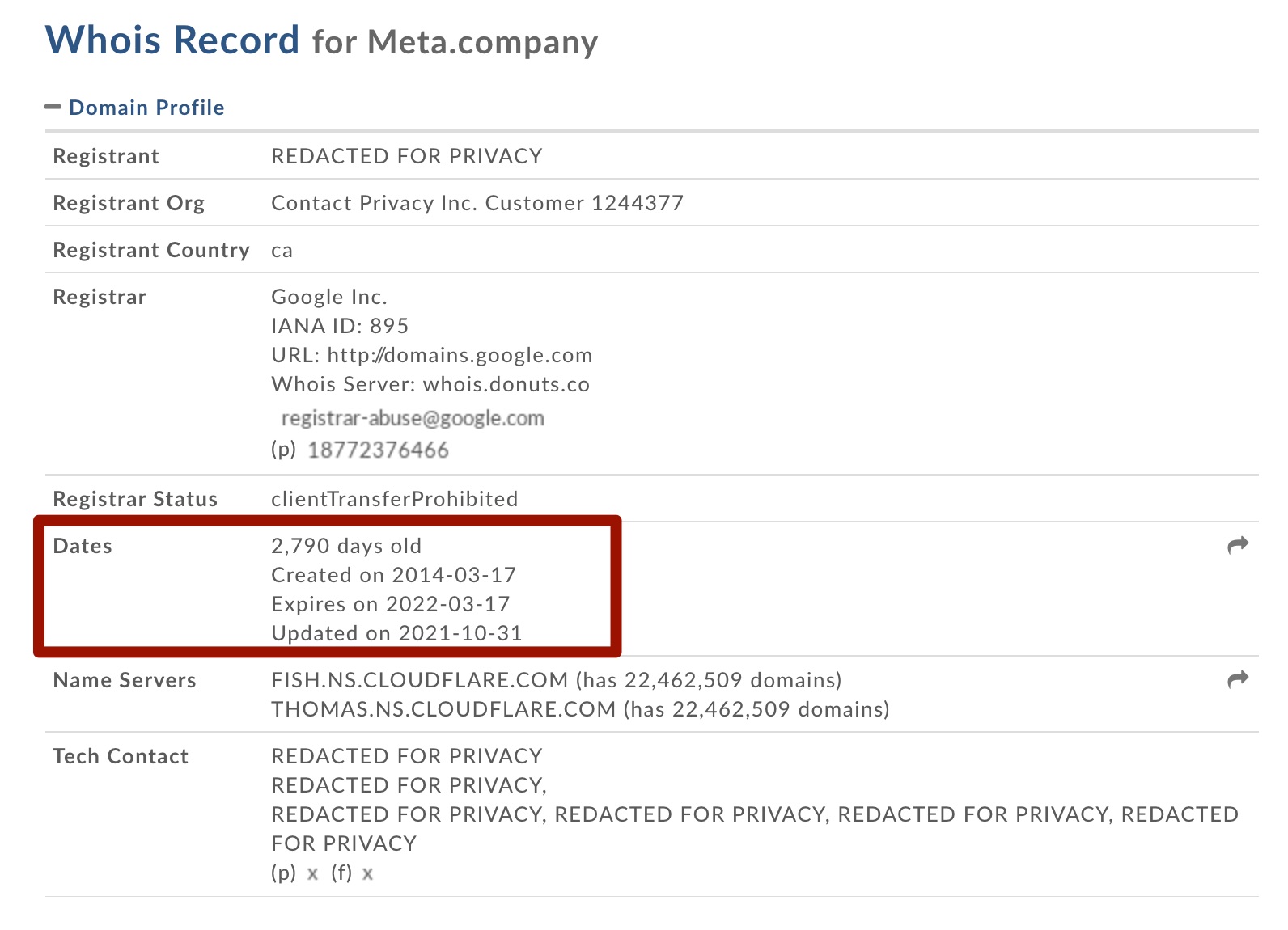 We pulled up web.archive.org’s complete history for meta.company, where we found a similar pattern of activity. A version of meta.company was archived a single time in August 2018, an error/404 page. The page was not archived again until November 1 2021, and that record displayed the “Facebook Stole Our Name and Livelihood” letter.

In short, a MetaCompany letter titled “Facebook Stole Our Name and Livelihood” circulated virally on Facebook, and many readers seemed to take its claims at face value. The post seemed legitimate enough, including pre-2021 USPTO and WHOIS records mentioning a METACOMPANY (from 2014 and 2016), but nothing indicated that “METACOMPANY” was the same entity making the claims. Suspiciously, all three linked social accounts were devoi of content prior to Facebook’s October 28 2021 “Meta” name change announcement, and even then, the accounts didn’t become active until October 31 or November 1 2021. It is, of course, possible that the letter described the struggles of a very small and very inactive company named “MetaCompany,” but we would be remiss if we did not point out that it is also very possible that someone acquired scattered “MetaCompany” assets between October 28 and 31 2021, with the intent of generating engagement based on broad distrust of Facebook and its subsidiaries.