An image shows a "microbiological culture of an 8-year-old's handprint after playing outside."

On September 14 2022, a Facebook account shared an image labeled “Microbiological culture of an 8-Year old’s handprint after playing outside” to the public group “Weird, Fantastic and Odd Things”: 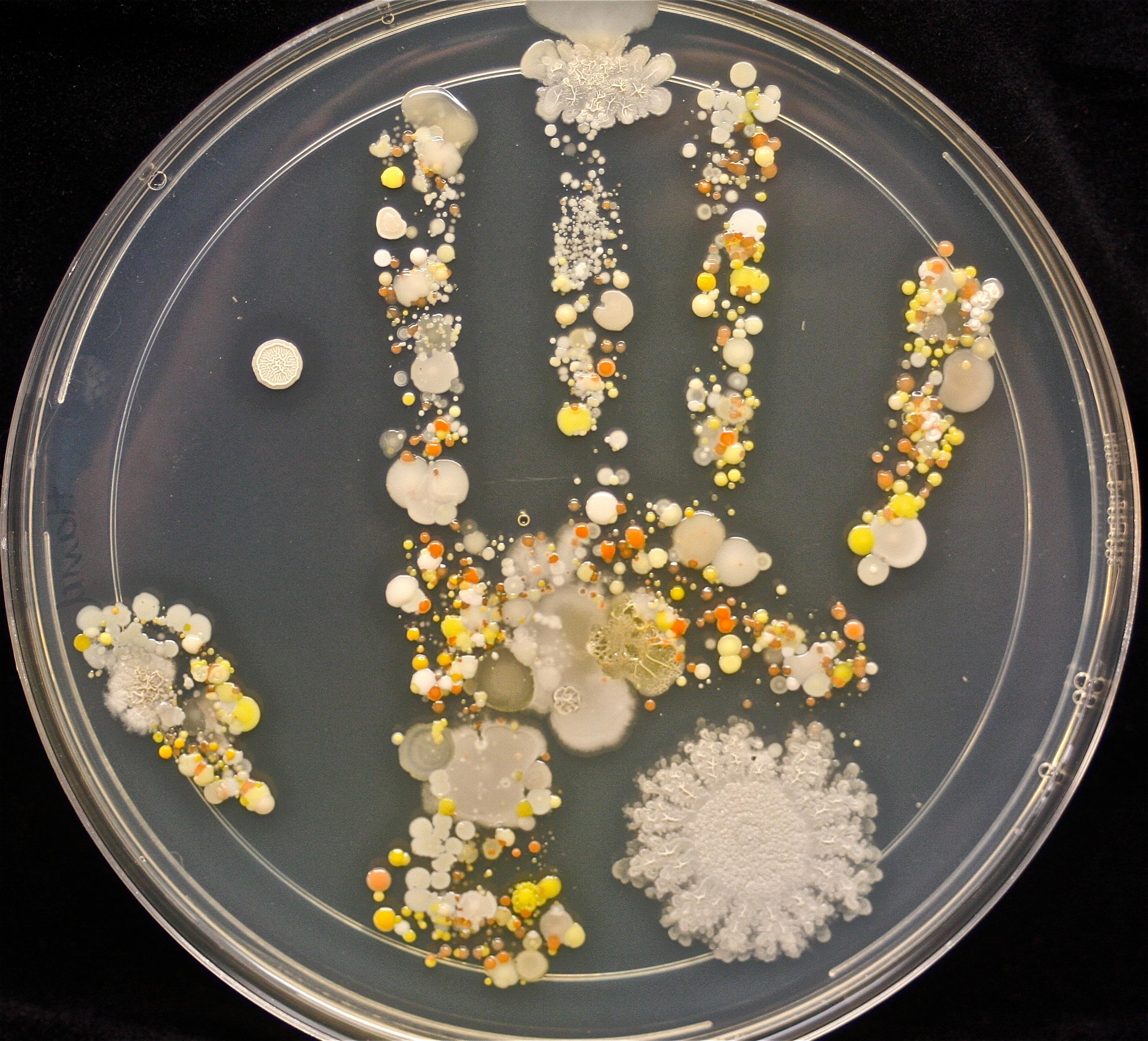 Against a black backdrop, the image resembled an old glass paperweight; spores and blooms roughly formed the shape of a handprint. No links or additional information accompanied the image.

Identical images were previously posted to the groups “Earth Unreal” and “Earth Pictures” (on September 13 and August 31 2022, respectively). All three posts included the same caption (“Microbiological culture of an 8-Year old’s handprint after playing outside,”) nearly verbatim with the exception of one period on the earliest post.

A reverse image search returned more than a thousand iterations of the same image, dating back to June 2015. The first version was an Imgur post from June 7 2015, shared by u/NoLongerThatGuy:

Palm print of an 8 year old in nutrient medium after the 8 year old had played outside.

That post bore a similar title to the text of the three Facebook posts: “Palm print of an 8 year old in nutrient medium after the 8 year old had played outside.” Once again, no additional information accompanied the image or claim, and several commenters correctly described the image as lacking context without a contrasting sample:

“I would like to see a comparison with after hand washing.”

“As a scientist, where’s the control for this?”

On the same day (June 7 2015), u/VerGuy shared the image to Reddit’s r/pics. As was the case with newer iterations and on Imgur, no additional information about the image appeared alongside the post:

Palm print of an 8 year old in nutrient medium after the 8 year old had played outside. from pics

And at least one commenter asked about the “control”:

“Where’s the control from before he went outside?”

Another reverse image search returned a short June 8 2022 HuffPost.com article (“Mesmerizingly Creepy Handprint Shows We’re All Crawling With Bacteria”), which provided some information about the image and its spread, presumably based on responses from the original Imgur poster:

Tasha Sturm, a microbiology tech at Cabrillo College, told The Huffington Post that she had her 8-year-old son make a handprint in a petri dish filled with agar jelly.

Next, she put the plate in her lab’s incubator. Warmed to body temperature and fed by agar jelly, the bacteria and fungus on her son’s hand grew into the cultures you see above. The picture has been viewed 2 million times on Imgur.

A June 9 2015 Mashable.com piece indicated that Sturm had first shared the image elsewhere, but the link in the article led to an error page. Mashable said:

Sturm shared the photo on Microbe World, writing in the comments that she’d taken the handprint just after her son returned from playing outdoors.

Several days and multiple rounds of incubation later, her son’s handprint had flowered into large — and strangely beautiful — colonies of staph, micrococcus, yeast, fungi and more.

We found Sturm’s original submission to the apparently now-defunct microbeworld.org, initially shared on June 4 2015 and archived here. It was captioned:

Hand print on a large TSA plate from my 8 1/2 year old son after playing outside.

Thanks! I used a large Kirby Bauer plates (15 x 150 mm) with TSA. I pour the plates myself and get them from either Hardy or Fisher … I am saving the plate to show the micro students in 1 1/2 weeks. I did take a few close up photo’s of some colonies which were also posted [links] The big blob in the lower right is the image “unknown from handprint #2” and is most likely a Bacillus sp which is commonly found in dirt…..saw a fair # of what looks like Bacillus. The other image is either a yeast or Bacillus as well. We do this at the beginning of the semester and this is pretty common. The white being Staph and the colored colonies probably yeast. The colored colonies tend to show up after the plates are refrigerated or left at room temp for a few days. Once summer school starts I might do some G stains if I have time but micro is not the only class I tech and it looks to be a fairly busy summer.

In the comments, Sturm linked to a June 8 2015 Today.com article about the image, “Striking photo shows all the bacteria on an 8-year-old’s hand.” In it, Sturm said the image captured the agar plate after one week of uninhibited bacterial growth:

In the spring of 2015, when [her son] was getting ready for school, Sturm asked him to play outside and pet the family dog. When the boy came back in, she had an agar plate — a sterile Petri dish filled with a substance used to grow bacteria — ready. After he gently put his hand onto the plate, Sturm incubated the dish at body temperature for a day or so and then let it sit out at room temperature.

By the time she took the photo, the bacteria had been growing for about a week. Her son’s reaction to the results?

In September 2022, images labeled “Microbiological culture of an 8-Year old’s handprint after playing outside” circulated on Facebook. The image was first shared to the no longer accessible site microbeworld.org on June 4 2015, but it went viral after it was shared to Imgur. The post’s original submitter spoke to a handful of media outlets at the time.