Minnesota keeps an original Confederate flag and refuses to return it. 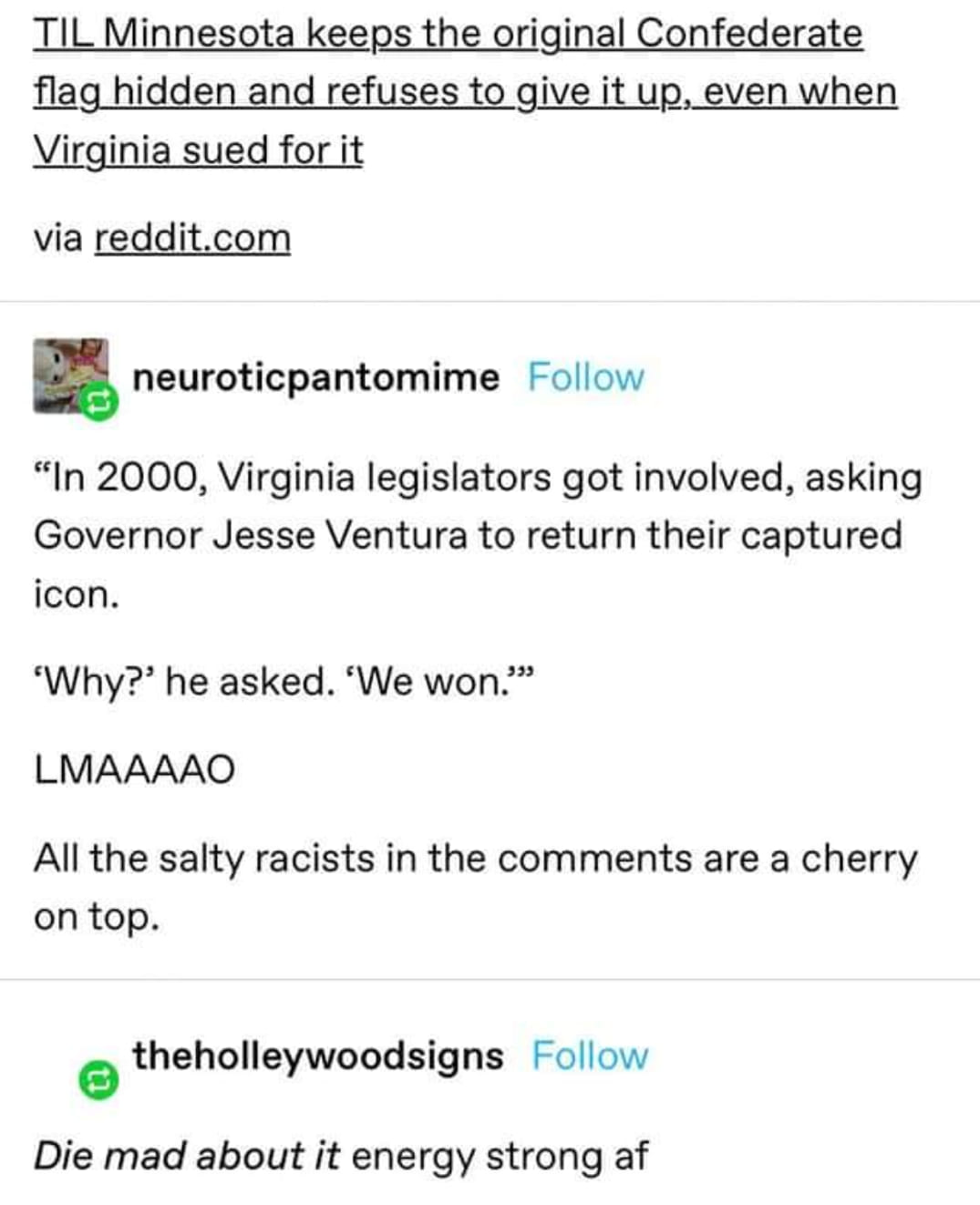 On November 17 2021, an account on r/tumblr shared the same screenshot (and others, in a larger set), in a post titled “Salty racists and Minnesota history”:

One element of the screenshot, purportedly quoting former Minnesota Governor Jesse Ventura, was shared separately to r/PoliticalHumor on November 19 2021:

Searches brought up several Tumblr reposts of the depicted conversation, which started with u/tilthat‘s linked comment claiming that “TIL Minnesota keeps the original Confederate flag hidden and refuses to give it up, even when Virginia sued for it.” That screenshot depicted a post from September 2018 or earlier, and read in its entirety:

[u/tilthat]
TIL Minnesota keeps the original Confederate flag hidden and refuses to give it up, even when Virginia sued for it [via reddit.com]

All the salty racists in the comments are a cherry on top.

TIL Minnesota keeps the original Confederate flag hidden and refuses to give it up, even when Virginia sued for it from todayilearned

That post linked to an August 2018 CityPages.com article (“If you’re wearing a Confederate flag T-shirt, you don’t deserve cheese curds,”) but the link wasn’t functional. We located an archived version, which reported:

In the state of Minnesota, there is but one Confederate icon: a ratty old flag, no longer on public display. It came into Minnesotan hands in 1863, when First Minnesota Private Marshall Sherman captured it during the bloodbath at Gettysburg.

And so began a long and beautiful Minnesotan tradition of making sure Virginia never gets its racist flag back.

Years later, when the U.S. Government was trying to figure out how many of these captured flags it actually had, that fateful Virginian flag turned up missing. Though pretty much everybody knew where it was: St. Paul, Minnesota. It was being used as a prop in a big, dramatic diorama of the Battle of Gettysburg, complete with Sherman and his Confederate prize. Admission to go gawk at it was 50 cents for adults and a quarter for kids.

CityPages.com noted that “for 100 years, Virginia has been asking for it back—even suing for it,” adding Ventura’s “we won” commentary:

In April 2020, the claim once again was shared to Reddit on r/Minnesota, in a post titled “TIL that Virginia has spent 100 years asking Minnesota for the return of a Confederate Flag captured at the Battle of Gettysburg…and Minnesota keeps saying no.” That post took us to an August 2017 TwinCities.com article reporting on the generations-long tug of war over the flag — once again quoting Ventura:

Virginia has asked for return of the flag for more than 100 years — and each time Minnesota has refused to return the hard-won symbol of victory. A president demanded return of Confederate flags, Congress passed a resolution ordering return of the flags, Virginians even threatened suit to get their flag back. And the answer has been the same: No.

In 1961, Virginia asked for the flag back to commemorate the 100th anniversary of the Civil War, according to a Roanoke Times article. Minnesota said no.

In 1998, Virginia Civil War re-enactors asked for the flag and eventually threatened legal action. A Minnesota historian said: “Blood has been shed for that flag. . Who are we to return it?” And Minnesota Attorney General Hubert Humphrey III said that despite a 1905 order that Civil War relics be returned, Virginia had no right to it.

In 2000, when Virginia legislators requested the Southern Cross flag once again, Gov. Jesse Ventura said: “Why? We won. … We took it. That makes it our heritage.”

In the Reddit post linked and cited in the viral Tumblr screenshot above, r/todayilearned moderators flagged the submission as “recent sources”; its citation was both published and shared to Reddit in August 2018. But the Minnesota Historical Society published a detailed document about the flag and efforts by Virginia to request it back in mid-2000 [PDF], again quoting Ventura’s “we won” remark.

That examination indicated the flag was nearly “returned voluntarily” in the 1960s, and noted:

Undeterred [by previous failures], the Virginians rallied in 2000 to renew their efforts for return of the flag. By March [2000] both houses of the Virginia state legislature had passed a resolution requesting return of the flag. The official response of the Minnesota Historical Society, again, was to decline the request. Nina M. Archabal, director of the MHS, commented, “The flag’s story clearly transcends state boundaries. Legally and ethically, the bond between this flag and the people of Minnesota should not be taken lightly.” Minnesota Governor Jesse Ventura also indicated his disinclination to grant the request. “Absolutely not!” he noted. “Why? We won.”

A viral screenshot from a “today I learned” post asserted that “Minnesota keeps [an] original Confederate flag hidden and refuses to give it up, even when Virginia sued for it.” That claim was true and well-documented, particularly Ventura’s “we won” commentary. That screenshot didn’t thoroughly allude to the ongoing nature of Virginia’s requests for the flag, and Minnesota’s steadfast refusal to surrender the Confederate flag to them. Nevertheless, the screenshot accurately described the dispute between Minnesota and Virginia, and correctly quoted Ventura’s response to a Virginian request in the year 2000.