"Moscow summons Croatian military attaché to hand in a protest note regarding Croatian citizens who have joined the war to help Ukraine. He simply refuses to take it. Legend."

On April 28 2022, an Imgur user shared a meme, purportedly showing a Croatian attaché in the act of refusing a note in an act of protest against Russia’s invasion of Ukraine: 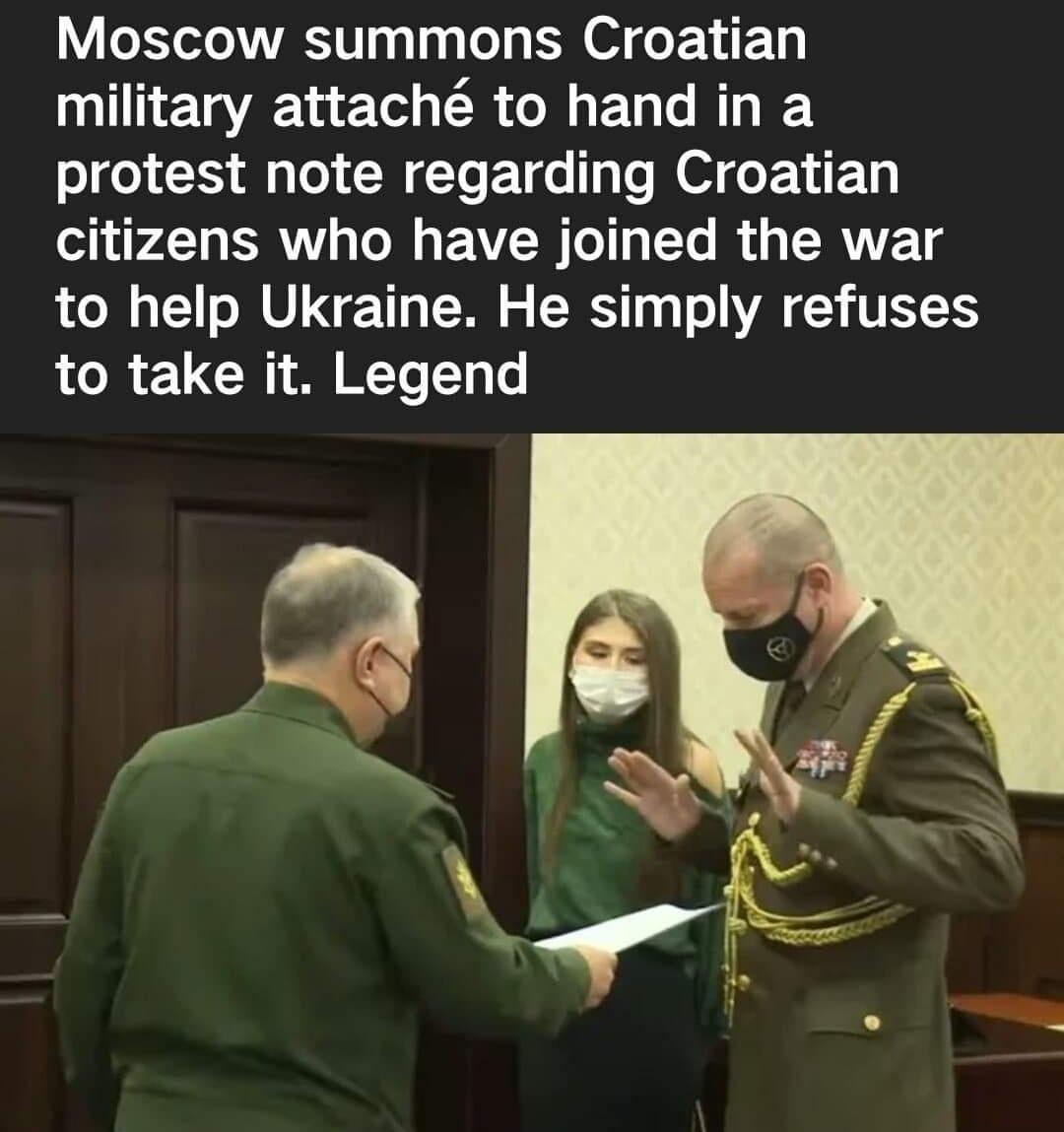 A photograph at the bottom of the image showed two men and one woman. To the left, a man in green military garb held out a piece of paper.

To the right, the other man (also in military attire) held both hands up, as if refusing to accept the piece of paper. No information was included alongside the image, like a news article or other context about the event or events depicted.

A search for the meme’s phrasing (“Moscow summons Croatian military attaché to hand in a protest note …”) led to a probable source for the combination of words and text. A post with that title was shared to meme site 9Gag on March 3 2022, but it also lacked any contextual information about the depicted interaction.

In late April 2022, a similar post was shared to Reddit’s r/ukraine:

However, that post was removed as a duplicate. A slightly different version (with the purported attaché’s hands in a slightly lower position) was shared to r/ukraine on March 3 2022, and to r/interestingasfuck on March 6 2022:

Croatian military attache(on the right) refuses to accept note from Russian Defense Ministry in Moscow over the alleged arrival of "200 Croatian mercenaries" in Ukraine. from ukraine

On March 5 2022, a Twitter account shared a version closer to March 2022 image — suggesting that the exchange originated with a moment from a video, resulting in slightly different screen grabs. In a subsequent tweet, the same account shared video of the interaction described:

The embedded video (marked as unlisted) was published to YouTube on March 3 2022, by the verified account “Минобороны России,” or “Ministry of Defense of Russia.” The clip was titled “The Defence Attache at the Croatian Embassy in Moscow was summoned to the Russian Defenсe Ministry,” and a description validated some of the description:

Today [March 3 2022], the Defence Attache at the Croatian Embassy in Moscow was summoned to the Russian Defenсe Ministry.

The military attache was pointed out to the illegal activities of Croatian citizen Denis Sheler, who participated in the hostilities in the south-east of Ukraine in 2015, forming detachments of Croatian mercenaries to be sent to Ukraine.

About 200 Croatian mercenaries are known to have arrived in Ukraine.

All mercenaries sent by the West to help the Kiev nationalist regime are not combatants under international humanitarian law.

They are not entitled to prisoner of war status.

The best thing that awaits foreign mercenaries upon arrest is criminal prosecution.

We urge citizens of foreign countries planning to go to fight for the Kiуv nationalist regime to think twice before the trip.

Military attaché Zeljko Akrap was summoned to the Russian Defence Ministry so that he could be informed that there are, according to the Ministry, some 200 Croatian mercenaries in Ukraine.

“The past week alone, about 200 mercenaries from Croatia arrived through Poland and joined one of the battalions of nationalists in southeastern Ukraine,” Russian Defence Ministry spokesman Igor Konashenkov said as carried by the Interfax and TASS agencies.

The military attaché therefore refused to accept the note, the ministry added.

An April 28 2022 Imgur meme was labeled “Moscow summons Croatian military attaché to hand in a protest note regarding Croatian citizens who have joined the war to help Ukraine. He simply refuses to take it. Legend.” The image began circulating on March 3 2022, the day on which the Croatian military attaché in question (Zeljko Akrap) was “summoned to the Russian Ministry of Defense.” On that date, N1 news covered the meeting, reporting that Akrap “refused to accept the note,” just as the meme’s text claimed. Although the image was from early March 2022, it was accurately described.