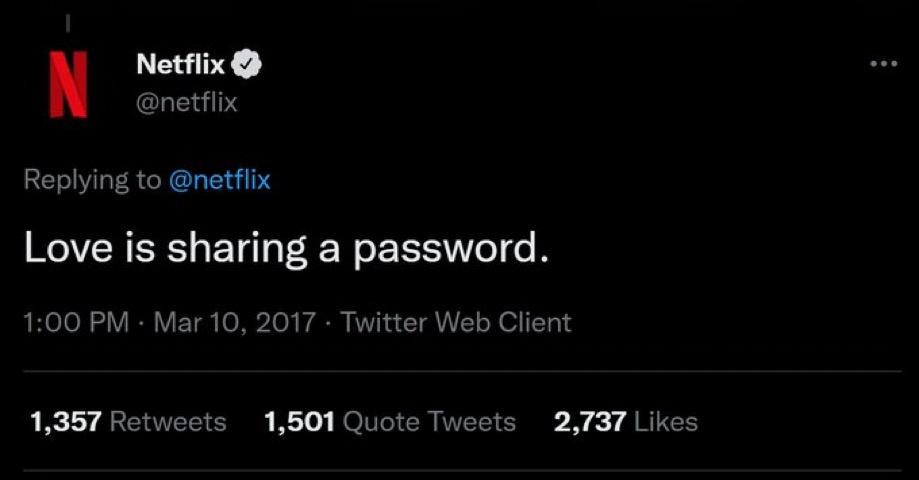 The post was titled “Keeping this here for when they eventually delete their tweets.” Google Trends data indicated moderate search interest for “Netflix” and “love is sharing [a password]” during the seven-day period ending March 22 2022.

Reports in March 2022 hinted that Netflix was considering ways to curtail password sharing — at least in specific markets. A March 16 2022 Variety article (“Netflix Will Prompt Subscribers to Pay for Users Outside Their Households in New Test to Address Unauthorized Password Sharing…”) began:

Netflix will soon launch a test letting primary account holders pay an additional fee for users outside their households — a new attempt by the company to address illicit password-sharing.

According to the Netflix terms of service, a customer’s account “may not be shared with individuals beyond your household.” After years of turning a blind eye to password-sharing behavior that falls outside that requirement, the company last year ran a limited test prompting users to enter their account credentials as a way to nudge freeloaders into paying for their own accounts.

Now, in an upcoming test launching in three countries — Chile, Costa Rica and Peru — Netflix will let members who share their accounts with people outside their household do so “easily and securely, while also paying a bit more,” according to Chengyi Long, director of product innovation at Netflix. The new options will roll out in the next few weeks in the three countries (and may or may not expand beyond those markets).

Although Variety stipulated that the “test launching” would affect Chile, Costa Rica, and Peru, the story quickly devolved to omit the region-specific aspect of the claim, which eventually became the subject of fact checks clarifying that the report did not apply to the United States.

Regardless of the muddled details around Netflix’s password sharing position in March 2022, screenshots of a purported March 10 2017 tweet circulated around the discussions.The tweet was real, and indeed from Netflix on March 10 2017:

Netflix’s “Love is sharing a password” tweet spread virally in March 2022, as part of discourse over a report that the streaming platform sought to “crack down” on password sharing. The claim that Netflix expressed intent to curb all sharing of passwords was slightly inaccurate — but the tweet was real, unedited, and live as of March 22 2022.