Government agencies are altering their data to falsify results showing that the planet's climate is getting warmer.

Among the conspiracy theories bandied about by “nature”-themed blogs is the idea that scientists have conspired to gin up mass panics over the planet’s climate-warming emergency.

One particularly hysterical claim was published by NaturalNews in June 2014, as the site “reported” — citing a separate far-right blog — that the National Oceanic and Atmospheric Administration (NOAA) and the National Aeronautics and Space Administration (NASA) had “been caught red-handed altering historical temperature data.”

The claim hinges on readers believing that climate scientists adjusting their findings is done with nefarious intent. A look at the blog’s list of “most viewed articles,” though, shows their reliance on that type of article, among other posts pushing far-right, anti-vaccination, and climate change denial talking points: 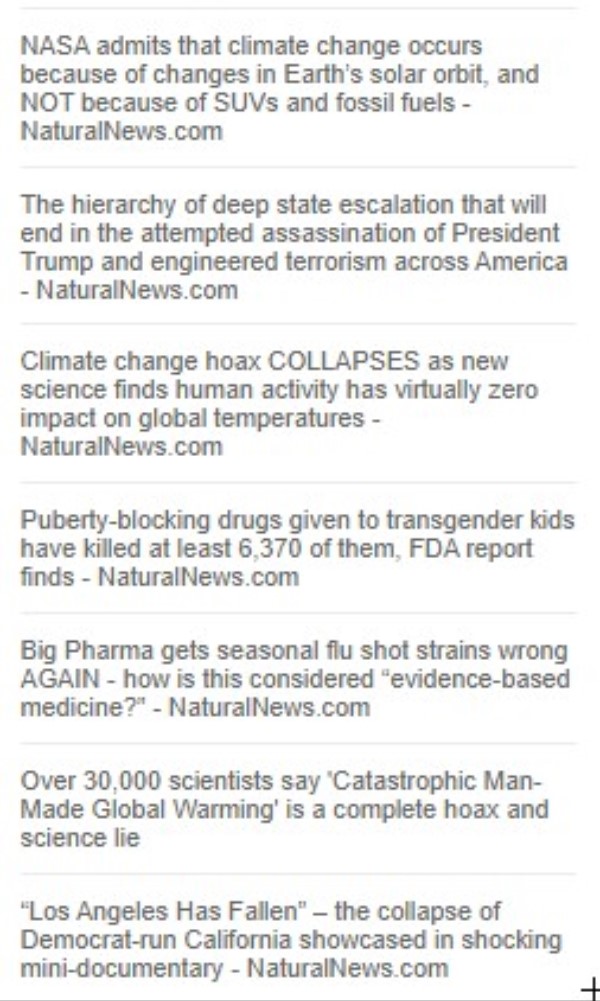 The site was not alone in pushing disinformation about a government climate “conspiracy”; as Forbes reported at the time, libertarian group the Heartland Institute published its own report claiming that data from the United States Climate Reference Network (USCRN) showed that “global warming is not so dramatic and uniform as alarmists have claimed.”

According to Forbes, the data in fact validated findings reported by the USCRN’s predecessor, the United States Historical Climatology Network (USHCN):

There are many ups and downs over shorter periods of time, but the full trend is one of rising temperatures. It could be that the further you go back, there could be more variation there might be between the USHCN and USCRN measurements of variance from normal. Perhaps there are other problems in measurement. But in neither case does the information allow intellectually honest and correct declaration that concerns over climate change to be overstated.

In a testament to the staying power of climate-related disinformation, Deke Arndt — who leads NOAA’s climate monitoring efforts — told the fact-checking site LeadStories more about their data-gathering process in October 2019, five years after the initial report from Natural News:

Data are adjusted to correct for non-climate biases like station siting, instrumentation, and so on. The largest factor, on average, are changes in the time of observation: the US was a nation of evening observers in the first part of the 20th century but is now a nation of morning observers. This adjustment is necessary because morning observers can “double count” low temperatures (a very cold morning can be the lowest temperature for the preceding and subsequent day), and evening observers can “double count” very hot afternoons (a very hot afternoon can be the highest temperature for the preceding and subsequent day).

Politicians have also been known to engage in the same kind of anti-science rhetoric. As The Guardian noted in 2016, congressman Lamar Smith (R-Texas) accused NOAA of trying to engineer “politically correct results in an attempt to disprove the eighteen year lack of global temperature increases.”

Smith’s allegations followed a study that year further charting the adjustment between the USCRN and USHCN systems. That report’s lead author, Zeke Hausfather, confirmed that their findings in fact did not show any slowing down on the planet’s overall warming trend.

“Our new study as well as a great deal of prior research shows that adjustments to temperature stations are effective at removing biases introduced by station moves, instrument changes, and other factors,” he said. “The fact that adjustments make the old historical network more similar to the new Climate Reference Network strongly suggests that they are getting it right.”