A screenshot of text beginning, "Now listen you rich people, weep and wail because of the misery that is coming on you" is a Bible verse, James 5:1-6.

In November 2019, a Tumblr screenshot beginning “now listen you rich people, weep and wail because of the misery that is coming on you” was shared to the Facebook group “Alexandria Ocasio-Cortez’s Revolutionary Meme Stash”: 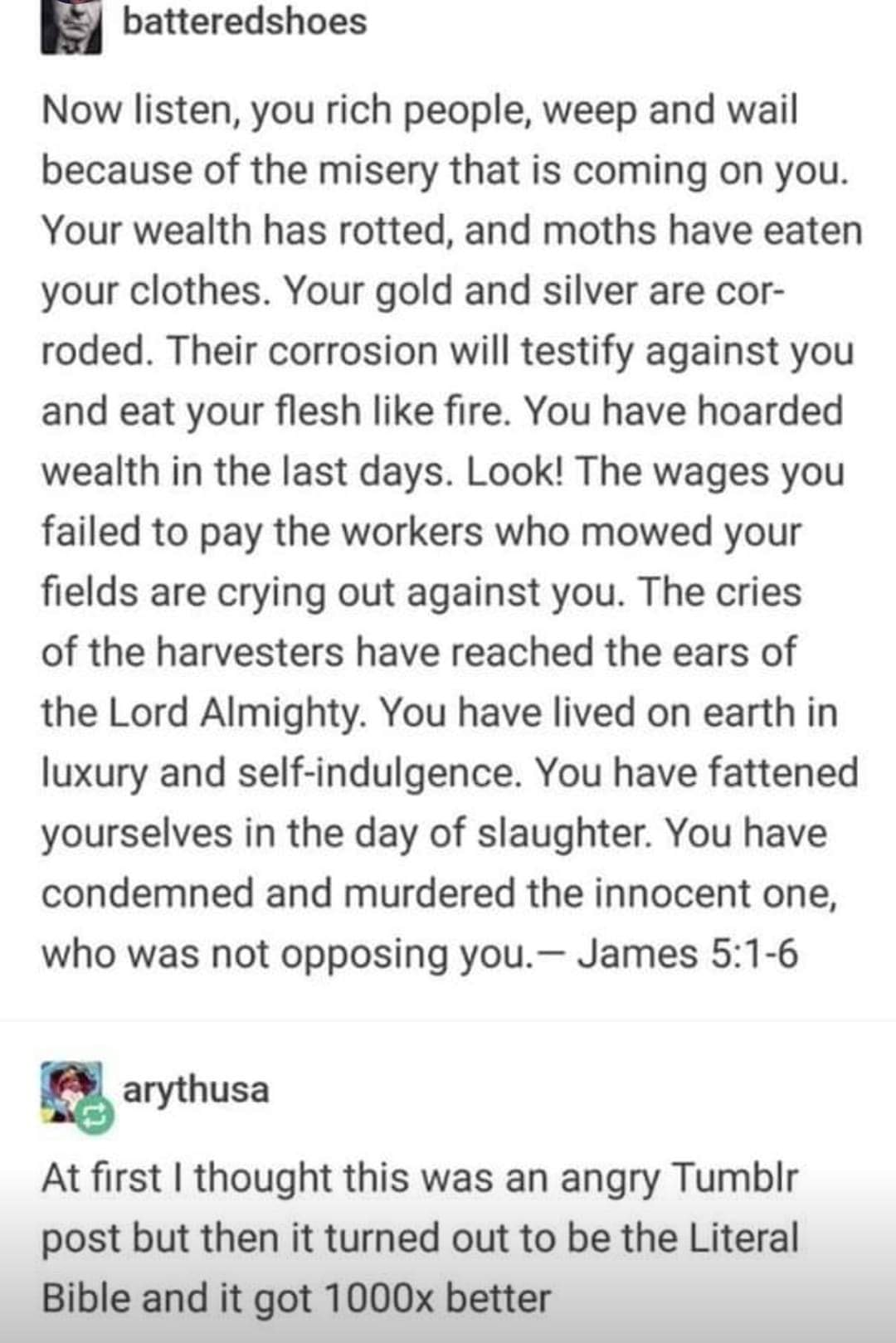 Facebook’s “Meme Stash” groups were popularized in 2015, after the creation of the group “Bernie Sanders’ Dank Meme Stash.” The original “Bernie Sanders Dank Meme Stash” page was so popular and prominent in the 2016 election meme cycle that it warranted its own Wikipedia page, and similar groups were later created for a number of politicians (including eventually Ocasio-Cortez.)

At the top of the meme was the name of an initial Tumblr user who posted the quote, which read:

Now listen, you rich people, weep and wail because of the misery that is coming on you. Your wealth has rotted, and moths have eaten your clothes. Your gold and silver are corroded. Their corrosion will testify against you and eat your flesh like fire. You have hoarded wealth in the last days. Look! The wages you failed to pay the workers who mowed your fields are crying out against you. The cries of the harvesters have reached the ears of the Lord Almighty. You have lived on earth in luxury and self-indulgence. You have fattened yourselves in the day of slaughter. You have condemned and murdered the innocent one, who was not opposing you.— James 5:1-6

Under that, Tumblr user arythusa commented:

At first I thought this was an angry Tumblr post but then it turned out to be the Literal Bible and it got 1000x better.

On batteredshoes.tumblr.com, the post was live but not clearly dated; the depicted note from arythusa was not immediately visible, but a direct link indicated it was at least a year old in November 2019. As of November 25 2019, the Tumblr post displayed more than 180,000 “notes,” the sites form of engagements.

At the end of the quoted text was a description indicating that it belonged to the Epistle of James, specifically James 5:1-6. Those verses appear in slightly different versions across Bible-related sites. On BibleGateway.com, under New International Version (NIV), “Warning to Rich Oppressors” read:

5 Now listen, you rich people, weep and wail because of the misery that is coming on you. 2 Your wealth has rotted, and moths have eaten your clothes. 3 Your gold and silver are corroded. Their corrosion will testify against you and eat your flesh like fire. You have hoarded wealth in the last days. 4 Look! The wages you failed to pay the workers who mowed your fields are crying out against you. The cries of the harvesters have reached the ears of the Lord Almighty. 5 You have lived on earth in luxury and self-indulgence. You have fattened yourselves in the day of slaughter.[a] 6 You have condemned and murdered the innocent one, who was not opposing you.

5 Come now, ye rich men, weep and howl for your miseries that shall come upon you.

2 Your riches are corrupted and your garments motheaten.

3 Your gold and silver are cankered, and the rust of them shall be a witness against you and shall eat your flesh as it were fire. Ye have heaped treasure together for the last days.

4 Behold, the hire of the laborers who have reaped your fields, which you kept back by fraud, crieth; and the cries of those who have reaped have entered into the ears of the Lord of Sabaoth.

5 Ye have lived in pleasure on the earth and been wanton. Ye have nourished your hearts, as in a day of slaughter.

6 Ye have condemned and killed the just, and he doth not resist you.

Warning to Rich Oppressors
5 Come now, you rich, weep and howl for the miseries that are coming upon you. 2 Your riches have rotted and your garments are moth-eaten. 3 Your gold and silver have rusted, and their rust will be evidence against you and will eat your flesh like fire. You have laid up treasure[a][b] for the last days. 4 Behold, the wages of the laborers who mowed your fields, which you kept back by fraud, cry out; and the cries of the harvesters have reached the ears of the Lord of hosts. 5 You have lived on the earth in luxury and in pleasure; you have fattened your hearts in a day of slaughter. 6 You have condemned, you have killed the righteous man; he does not resist you.

BibleHub.com listed the beginning of each version on a single page collating several iterations. In August 2019, the Tumblr post was shared to the subreddit r/RadicalChristianity:

"Now listen, you rich people, weep and wail because of the misery that is coming on you." from RadicalChristianity

A commenter replied to claim that their reference to the verse offended a minister on Facebook:

one of my absolute favorite verses. I posted it in response to a minister on Facebook stanning trump and he deleted the whole post

BibleRef.com provided the following “Context Summary” of James 5:1-6, adding in a lengthier analysis that “God will not allow injustice to go unpunished,” and “the temptation to trust wealth instead of God is a trap, and most of us are vulnerable to it”:

James 5:1–6 has a tone similar to that of an Old Testament prophet pronouncing the coming judgment on a group of people. This includes describing the ruin of these people as if it has already occurred. James lays out the charges against the rich landowners who were oppressing the poor. These crimes include selfishness, abuse of their workers, and indifference. Those rich sinners should start weeping and wailing now; their judgment was coming on the day of the Lord.

The Theology of Work Project also analyzed James 5:1-6 on a page titled “Oppression of Workers (James 5:1–6).” The analysis notes that James “returns to the principle that work must serve the needs of oth­ers,” and his “words in the beginning of chapter 5 are scathing” in an examination that reads as deeply relevant to the debates of 2019:

These rich people are doomed both for how they acquired their wealth and for what they did (or didn’t do) with it once they had it. James echoes the Old Testament as he excoriates them for their unjust business practices: “Listen! The wages of the laborers who mowed your fields which you kept back by fraud, cry out, and the cries of the har­vesters have reached the ears of the Lord of hosts” (James 5:4; cf. Lev. 19:13). Money that should be in the hands of laborers sits instead in the treasuries of the landowners. And there it stays—they hoard their wealth and ignore the needy around them (James 5:3).

Business leaders must be especially diligent about paying their work­ers fairly. An analysis of what constitutes fair pay is beyond the scope of this discussion, but James’s words “the wages you have kept back by fraud” (James 5:4) are an accusation of abuse of power on the part of these particular wealthy landowners. The workers were owed wages, but the rich and powerful found a way out of paying them without incurring punishment by the legal system. The rich and powerful often have means to subvert the judiciary, and it’s astonishingly easy to exercise unfair power without even recognizing it. Abuses of power include misclassifying employees as independent contractors, inaccurately registering workers in a lower skill code, paying women or minorities less for doing the same job as others, and using children for jobs so dangerous that adults refuse to do them. Misuse of power can never be excused just because it is a so-called standard practice.

Arguably, “Misclassifying workers as independent contractors” was not necessarily an area of concern in Biblical times, but it stood in as a more modern example of workers being denied fair compensation for their labor and expertise. That analysis went on to highlight scenarios in which immoral acts are enabled through assumptions such abuses are commonplace and thus acceptable.

Trinity Study Center’s James 5:1-6 Bible study guide explored similar themes. In that breakdown, the author points out how the verse speaks to both the “guilty wealthy” as well as the chronically exploited workers:

James goes on to talk about these rich people’s dealing with those who work for them. They are reluctant to share the wealth with those that directly helped them acquire it; they desire to keep as much of it for themselves as they possibly can. Again, James says there is a consequence. What has been done will not remain hidden forever. The injustice done to fellow human beings will be exposed. For those who are the guilty wealthy this is meant to bring about repentance and renewed trust in God. For those who are cheated by others, who are exploited by those attempting to acquire and hoard wealth, this is a note of hope. He is their advocate. God is not absent. He sees and knows the injustices of this world and is committed to setting things right. They (and we) may have to wait a long time to see the justice of God worked out, but we can know that it will happen. Out of faith we can participate in this process here and now, but the final and complete work belongs to our heavenly Father. Only He sees and knows everything and only He can bring about deep and true healing, restoration, and reconciliation.

The warnings [in James 5:1-6] serve two main purposes. First, they should encourage us who know God to be faithful and endure, knowing that in due time He will judge the wicked. Second, it should warn us not to fall into any of the sins that will bring judgment on the wicked. In the case James is addressing, it is easy when you’re poor and oppressed to think, “If I can just get rich, I will no longer have to deal with these problems!” So we can be tempted to pursue wealth, mistakenly thinking that happiness lies in getting rich. So to the church, James is saying, Because wealth can be a dangerous trap, we should be careful not to use it in an ungodly manner, but rather to be faithful.

A Tumblr post beginning “now listen, you rich people, weep and wail because of the misery that is coming on you, your wealth has rotted, and moths have eaten your clothes, your gold and silver are corroded” is listed as being James 5:1-6; it matches up with several popular versions of the English-language Bible. Wording differentiates a little between versions, but theological and Bible study materials demonstrate that the verse is both authentic and intended as both a message for the “guilty wealthy” who hoard riches generated by exploited workers as well as the abused laborers suffering under such a system.