"Scientists in Tennessee working at the Oak Ridge National Laboratory in eastern Tennessee, have announced that they're trying to figure out whether or not parallel universes exist. They revealed that they're trying to open a portal into another dimension, with lead physicist Leah Broussard announcing that they will conduct a series of experiments by firing a beam of neutrons through a 50-foot tunnel!"

Has the multiverse finally arrived? A June 18 2022 post by the Facebook page “Unexplained Mysteries” claimed scientists at the Oak Ridge National Laboratory in eastern Tennessee endeavored to “open a portal” to a parallel universe: 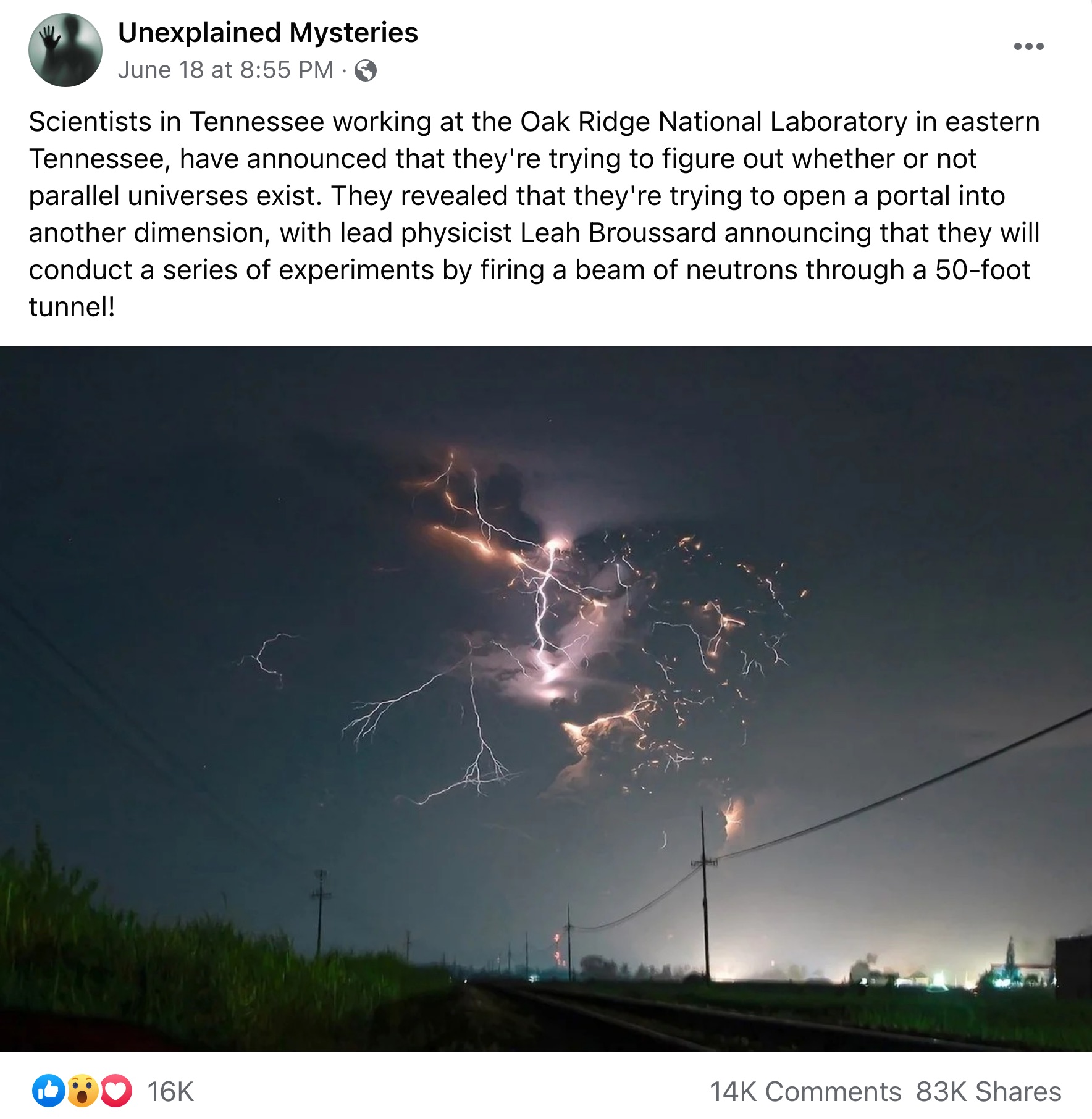 No links to articles or other citations were included alongside the post, but it did feature a spooky-looking photograph of lightning. Its text proclaimed:

Scientists in Tennessee working at the Oak Ridge National Laboratory in eastern Tennessee, have announced that they’re trying to figure out whether or not parallel universes exist. They revealed that they’re trying to open a portal into another dimension, with lead physicist Leah Broussard announcing that they will conduct a series of experiments by firing a beam of neutrons through a 50-foot tunnel!

As for the photograph with the post, reverse image search revealed that it was first crawled in 2014; that link was dead. Sorting by “biggest image” led to a September 2014 post to Reddit’s r/woahdude, titled — perhaps not coincidentally — “Like a portal to another dimension”:

Google suggested the term “wild lightning” for the image, and led us to the oldest iteration we  could find on a Chinese news site. TinEye first crawled the image on February 20 2014, and on February 14 2014, ChinaNews.com.cn captioned the image as follows:

On February 14, 2014 local time, several lightning bolts cut through the night sky in Blitar, Indonesia, and the scene was spectacular. it is reported that the lightning phenomenon is related to a nearby volcanic eruption.

Based on that chronology, it appeared the Facebook page “Unexplained Mysteries” Googled “portal to another dimension.” Due to the popular Reddit post, the February 2014 image of lightning in Indonesia was one of the first Google images results to accompany the post.

Google Trends data for the seven-day period ending June 21 2022 for the search term “Oak Ridge” demonstrated widespread searching for information about the viral Facebook post. All of the first five related searches had “Breakout” interest, and they were as follows:

We searched Twitter for “Oak Ridge parallel universe,” and the “top” tab’s second tweet was from June 2022. It referenced the claims in the Facebook post, and a sentiment quite familiar to those when similar claims of scientists discovering a parallel universe were made in May 2020:

So scientists at Oak Ridge National Laboratory in Tennessee are tryna open a portal/prove the parallel universe theory & have been conducting tests since 2019 but there’s not much news about it & I’m not even surprised anymore. Just let it open in my kitchen at this point

In the article’s first few paragraphs, NBC News indicated that the purported experiment in question dated back to 2019. Notably, the first two sentences alluded to at least some exaggeration:

At Oak Ridge National Laboratory in eastern Tennessee, physicist Leah Broussard is trying to open a portal to a parallel universe.

She calls it an “oscillation” that would lead her to “mirror matter,” but the idea is fundamentally the same. In a series of experiments she plans to run at Oak Ridge this summer [of 2019], Broussard will send a beam of subatomic particles down a 50-foot tunnel, past a powerful magnet and into an impenetrable wall. If the setup is just right — and if the universe cooperates — some of those particles will transform into mirror-image versions of themselves, allowing them to tunnel right through the wall. And if that happens, Broussard will have uncovered the first evidence of a mirror world right alongside our own.

The mirror world, assuming it exists, would have its own laws of mirror-physics and its own mirror-history. You wouldn’t find a mirror version of yourself there (and no evil Spock with a goatee — sorry “Star Trek” fans). But current theory allows that you might find mirror atoms and mirror rocks, maybe even mirror planets and stars. Collectively, they could form an entire shadow world, just as real as our own but almost completely cut off from us.

Several paragraphs in, the article described an extremely brief experiment, one that occurred in the summer of 2019:

Running the experiment will take about one day. Collecting the data and weeding out every possible source of error might then take a few weeks more. Broussard is looking for any telltale neutrons that managed to get past the barrier by turning into mirror neutrons, then turning back. “It all comes down to: Are we able to shine neutrons through a wall?” she says. “We should see no neutrons” according to conventional physics theory. If some of them show up anyway, that would suggest that conventional physics is wrong, and the mirror world is real.

Its final three paragraphs included Broussard’s attempts to corral the scope of the experiment amid sensational reporting:

Zurab Berezhiani, a physicist at the University of L’Aquila in Italy who has conducted his own mirror neutron searches, offers an intriguing explanation: Dark matter has been hard to find because it is hidden away in the mirror world. In this view, dark matter and mirror matter are one and the same. If so, the mirror world is not just ubiquitous, it is far more massive than our own. At a recent physics conference, Berezhiani expanded on the idea, outlining a possible parallel reality full of mirror stars, mirror galaxies and mirror black holes. Maybe even dark life?

“Dark people is probably a bit farfetched,” says Broussard, who confesses that these ideas push her right to the edge of her comfort zone. “But dark matter is very likely as rich as our own matter. This kind of thing needs to be explored.”

If she can open a passage to the mirror world at Oak Ridge, that will be one heck of a start.

A search for “Leah Broussard” led to her Twitter account. NBC News tweeted the article quoted above on July 3 2019; Broussard retweeted a July 16 2019 tweet urging readers to be cautious about “experiments that claim the existence of parallel universes” and commented:

Thank you Ethan for this excellent article! This gets right to the heart of the true challenge in searching for new phenomena: do we really understand our systematic effects? In our experiment, magnetic fields could impact much more than the theoretical oscillation probability.

In her response tweet, Broussard once again sought to de-sensationalize reporting on physics:

Thank you Ethan for this excellent article! This gets right to the heart of the true challenge in searching for new phenomena: do we really understand our systematic effects? In our experiment, magnetic fields could impact much more than the theoretical oscillation probability.

In the July 2019 Forbes blog post Broussard shared, the author she thanked mentioned her experiment. He described several instances in which seemingly extraordinary findings had mundane causes, and concluded:

And that’s not even including possible sources of contamination like muons, neutrinos, or secondary particles produced from neutron collisions or neutrons from radioactive decays. After all, the searches for dark matter via direct detection have shown that all of these sources are important. The goal is not to just get a signal — certainly not a signal of just one neutron — but to get a signal that can be understood over the background of your noise.

Any time you get a positive signal from an experiment, you cannot simply take that signal at face value. Signals can only be understood in relation to the noise background of the experiment, which is a combination of every other physical process that contributes to the result. Unless you quantify that background and understand the source of everything that your final signal is composed of, you cannot hope to conclude you’ve discovered a new phenomenon in nature.

Science progresses one experiment at a time, and it’s always the full suite of evidence that must be considered in evaluating our theories at any given time. But there is no greater false flag than an experiment pointing to a new signal extracted against a poorly understood background. In the endeavor of pushing our scientific frontiers, this is the one area that demands the highest level of skeptical scrutiny. Mirror matter and even a mirror Universe might be real, but if you want to make that extraordinary claim, you’d better make sure your evidence is equally extraordinary.

In short, it appeared that the July 2019 coverage of Leah Broussard’s experiments at the Oak Ridge National Laboratory seeded a narrative unwanted by the involved scientists — that the objective was to “open a portal to another dimension.” Broussard didn’t use Twitter much, but in 2019, she retweeted a blog post reiterating that extraordinary claims require extraordinary evidence; further, the experiment appeared to have been conducted in July 2019.

In June 2022, the Facebook page “Unexplained Mysteries” dug up and dusted off the Oak Ridge National Laboratory parallel universe claim, and paired it with a Google Images result for “portal to another dimension.” The post didn’t mention that the claims were “news” in 2019, it didn’t link to an article, and it didn’t included the available engagement from Leah Broussard on her experiment. In July 2019, NBC News’ coverage seemed, based on Broussard’s quoted responses, to sensationalize the experiment. Not long after it was published, Broussard tweeted and commented on an article advising readers not to fall for claims about parallel universes, titled “You Must Not Trust Experiments That Claim The Existence Of Parallel Universes.” Although Broussard was involved with an experiment at Oak Ridge National Laboratory, she also amplified another piece discouraging the sort of reporting echoed in the Facebook post.