On March 1 2020, a Facebook user shared a Twitter screenshot about Pablo Picasso having died in 1973, which appeared somewhat in the style of “I was today years old when I learned” memes.  On Facebook, the post racked up 40,000 shares and counting within 48 hours. On Twitter, the original February 28 2020 tweet was even more popular:

Although 1973 was not even fifty years before 2020, the claim seemed to resonate wherever it was shared. In fact, a number of “today I learned” and similar Reddit subreddit posts expressed nearly identical sentiments over the years:

TIL That Pablo Picasso died in 1973 – for some reason I thought he was alive a really long time ago. from todayilearned

TIL Pablo Picasso lived until 1973, long enough to have a colour photograph taken of him. from todayilearned

TIL Pablo Picasso died in 1973! from todayilearned

Commenters in those threads replied with sentiments similar to the one in the tweet — that they had believed that Picasso was of a far earlier era:

I’m ashamed to admit that before reading this factoid on here a couple days ago I would’ve placed his death sometime in the late 19th/early 20th century. I excitedly announced to my wife that “Picasso just died in 1973!” and she called me an idiot. But whatever, she thinks the expression “play it by ear” is play it by year, and sometimes modifies it like “we’ll play it by month.”

One of the TIL posts had a title indicating Picasso “lived until 1973, long enough to have a colour photograph taken of him.” A top comment accepted the poster’s point, but pointed out that color photography itself was not very new in 1973:

Color photography was around way before 1973, but i see your point, most people don’t realize he lived that far into more modern times.

Had to add this bit of info;

So in theory Pablo could have had a digital photograph taken of him.

In threads like that, comments edged uncomfortably close to unspoken questions about what life was like in the 1970s. And a popular post on r/tumblr again demonstrated disbelief at hearing Picasso died in 1973, also indicating that post on Tumblr had a lot of engagement (due to Tumblr users all apparently believing that the artist wasn’t around during the 20th century):

Although the original Tumblr post was inaccessible, it lived on in reblogs, and read:

finding out picasso died in 1973 feels like the fakest thing ive ever heard. everyone talks about him like he lived in a cave with nothing but a torch and paint he made from berries or bear shit or somethin but nah this dude probably sat down watchin looney tunes thinkin “damn i should draw some dude with a nose on his forehead thatd be dope” i feel so lied to

Other users shared where they were when they learned Picasso was a relatively modern artist, describing the moment as some “Mandela effect type shit”:

Barstool Sports even reported Picasso’s 1973 death as new news in December 2018. Once again, the existence of archival images in color or video of Picasso proved mind-blowing to the author:

Not only that but there’s VIDEO OF HIM PAINTING

Not only did Picasso die in 1973, outlets like the New York Times and New York Daily News had accessible obituaries for the artist on their respective sites:

PARIS, April 8 [1973] — Pablo Picasso, 91, the most influential and prolific painter of the 20th century, died today at his country home at Mougins on the French Riviera, overlooking the rust-colored hills and the blue Mediterranean which had become his spiritual home.

He died of pulmonary edema, an accumulation of water in the lungs. Although he had had several bouts with flu during the winter, his death came as a surprise to his wife, Jacqueline, and to the few friends who had visited him recently, still hard at work in his immense, cluttered atelier.

One element of the repeated rediscovery of this fact was ongoing confusion about the era in which Pablo Picasso had lived and died. Commenters routinely stated they believed Picasso was notable several centuries prior, not unlike other relativity of historical events facts which had previously gone viral.

It was extremely common for commenters to concur with the misperception, and then chide themselves for being “stupid” or “uneducated.” But art history isn’t something to which most people outside art school are often exposed, and a simple online search suggested that cognitive grouping of well-known names in art might be why readers repeatedly surprised one another with Picasso’s death date.

We searched on Google for “who were the greatest painters of all time?”; Google automatically sorts a header to the top of results. Picasso was ranked third by Google, but the ordered list and its range of notability seemed to show where the idea Picasso was from an earlier era might have arisen.

Leonardo da Vinci and Vincent Van Gogh were first and second, dying in 1519 and 1890 respectively. Picasso was third, followed by Rembrandt (1669) and Michelangelo (1564): 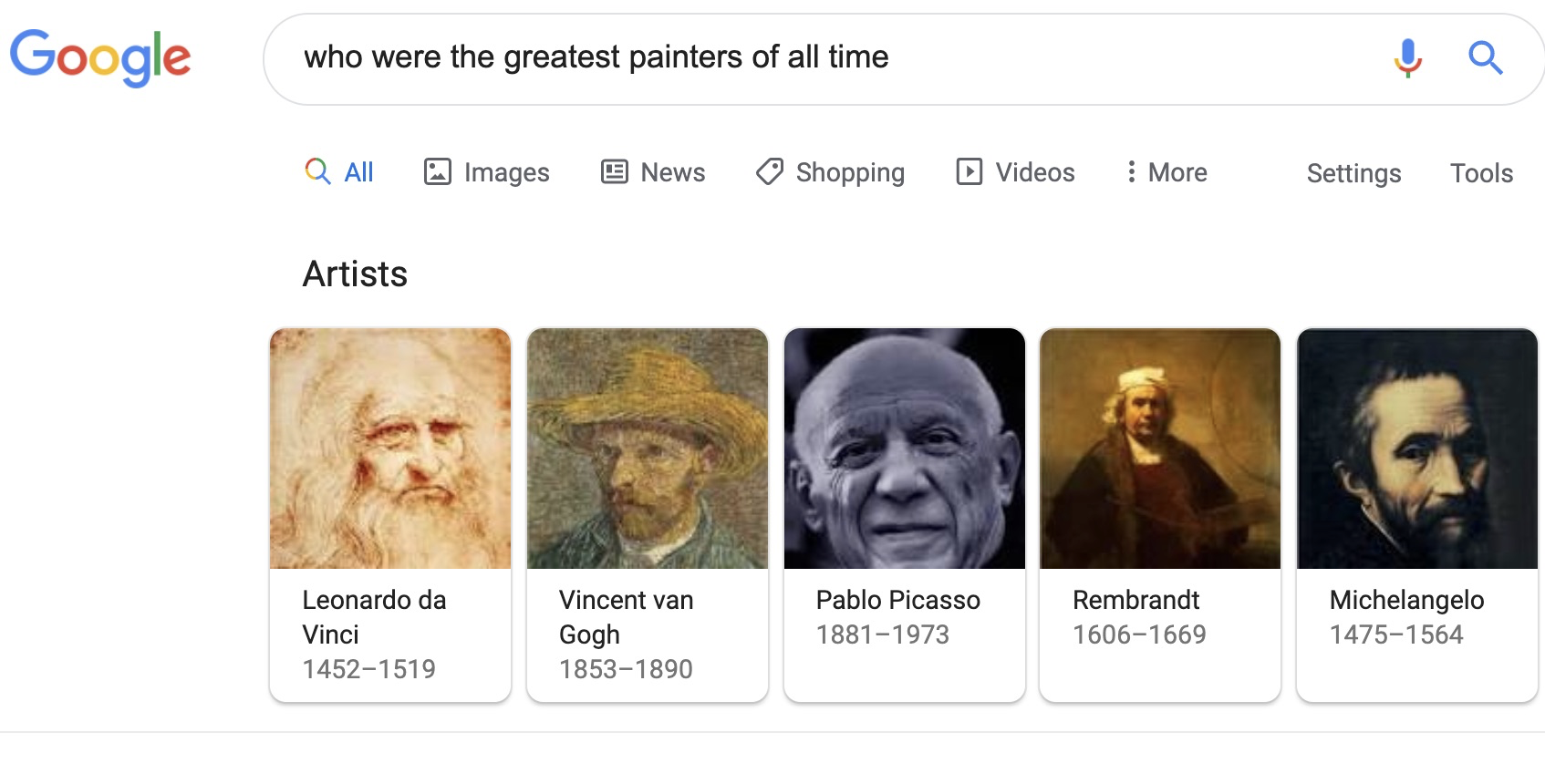 When we averaged the first row of dates, it came out to about 1723. Adding the second row brought the average up to 1750, and the inclusions of the 20th century painters of the third row (Pollock, Klimt, Renoir, and Matisse) only brought that average up to 1780. So many of the most well-known artists were from broadly-recognized periods like the early and late Renaissance — if a list cites da Vinci (1590) and Michaelangelo (1564) alongside Picasso (1973), it was probably natural for people to assume that Picasso came after the Renaissance, but not long after.

It was fairly easy to verify that Pablo Picasso indeed died in 1973, but that didn’t really seem to be the interesting information revealed in the referenced posts over the years. More interesting to people was how so many users were mistaken about Picasso’s era — which seemed likely down to human tendency to group similar items. It also raises profound questions about groupings and how this very human tendency is exploited in the age of weaponized digital disinformation — questions to which we are only beginning to answer.